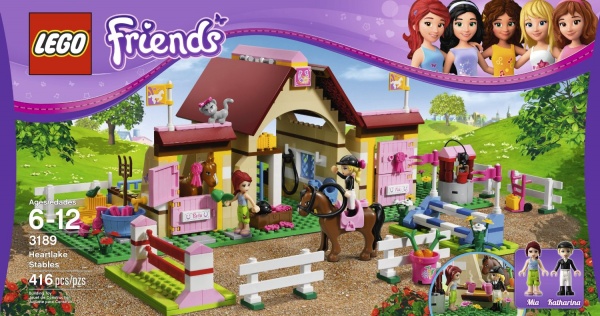 She spends hours with them. Literally hours. And, apparently she is not alone.

Lego Friends have captured the heart of my daughter, as well as thousands of other school-aged girls across the country. In fact, the Lego Friends series has been a financial boom to the Lego corporation in just a few months.

The town of Heartlake begins at the building table, and continues to the reading chair. Lego Friends books tell the story of every female character; the girl’s interests, hobbies, skills, and family.

As a mom, I was genuinely excited that my daughter had taken interest in this series. For decades, Legos have been the building toy. And prior to Lego Friends, my daughter had ZERO interest. The traditional blue, red, and green blocks that built a car or boat were received with a sigh and a shrug. Ninjago? No thanks.

To my genuine surprise, however, put some pink and purple blocks on a table and she is all in – completely enraptured in the town of Heartlake with all the characters and drama she imagines.

Can you understand how I was crushed to find the very Legos my daughter loves have been under fire? One of the worst toys of the year? Petitions to stop sales?  An inexcusable attempt at sexist marketing that should put anyone who touches them to shame?

I have to admit all the press made me stop and think. By allowing my daughter to play with Lego girls who ride horses or sit by the pool, am I promoting stereotypic gender roles? I assure you, that was not my intent. I was just excited to finally find a building toy she enjoyed.

I would never want to provide activities that would limit my daughter’s view of her potential. My husband and I praise and encourage many facets of her life, shining light on her many strengths and gifts. As she tinkers and plays, I would hope that my life example of motherhood, personal achievement, and citizenship outshines any sparkly jewel in a pastel colored plastic house.

But, maybe I’m just blinded by Heartlake city’s bright lights – just like Lego wants me to be.

Finding the best diet for you is an art, not a science

Inspired after seeing my 5-year-old patient