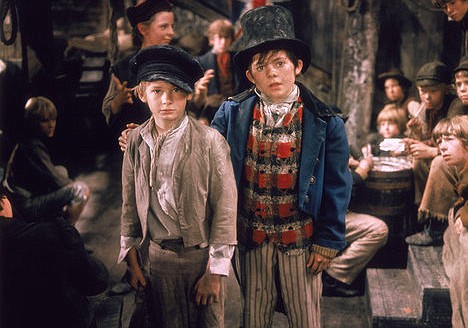 I remember going to see the movie “Oliver” in the theater when I was a kid.  Since this was my first movie in a theater, my mom made me a treat: a bag full of raisins and chocolate chips (Raisinets for Dutch people) and sent me there with my sister.  It was a fine film, with Oliver getting kicked out of the orphanage when he wanted more gruel, the dastardly Bill Sykes threatening Oliver and sweet Nancy, the funny and clever artful dodger and Fagan teaching Oliver about life on the street, and with (spoiler alert!) good overcoming evil in the end Oliver getting adopted by a rich dude so he can get all the gruel (or real Raisinets) that he wanted.

And though my memories of the movie are still vivid, my strongest memory was the look on my sister’s face when I walked out of the theater covered with melted chocolate chip goo.  It went into family lore (and wouldn’t have happened if they had sprung for Raisinets, I might add).  I think they still don’t trust me with chocolate chips.

The key line in the film comes when Oliver loses a bet and goes up to the gruel-master and says: “Please Sir, I want some more.”  Which, as I am sure Oliver expected, causes the gruel-master to break into the song, “Oliver! Oliver! Never before has a boy wanted more!” and the whole dining hall to pull out musical instruments and singing harmony to the gruel-master’s admonition.

I can see why Oliver was scared.  A whipping is welcome compared to his whole world breaking into song and dance.

Asking for “more” has caused trouble over the ages.  Adam and Eve wanted more food choices, the people of Pompeii wanted more mountain-side housing, Napoleon and Adolph Hitler wanted to spend more time in Russia, and America wanted more of the Kardashians. We can all see what destruction those desires reaped.

Americans have been viewing health care the same way, always wanting more: more antibiotics, more technology, more robots doing more surgery, more expensive treatments for more diseases.  The result: health care costs more in America than anywhere else.  Some folks think that our “more” approach makes our health care “the best in the world,” after all, where else can you get so many tests just by asking.  MRIs for back pain, x-rays for coughs, blood tests for anyone who dons the door of the ER.  ”Tests for everyone!” shouts the bartender. “Tests are on the house! ”

They aren’t, of course, and we are paying the price for “more.”  This hunger for “more” is fueled by the media’s fascination for the “latest thing,” the long disproved idea that technology will solve everything, and docs who aren’t willing to take time to explain why it’s actually better to do less.  It’s hard to do, when we are paid more to spend less time with patients, and when the system is willing to pay for more and more.

There is a voice against this: the Choosing Wisely campaign, which argues against unnecessary treatments and tests.  This is a welcome voice of reason in the cacophony of cries for “more.”  Yet the battle goes against the irresistible tide of our payment system.  The root problem is this: there are a whole lot of people whose jobs depend on America’s addiction to “more.”  The payment system has created an ecosystem that thrives off of waste (of which I once wrote an allegorical fantasy).  True health care reform will be catastrophic to many who work in health care, with many very nice and hard-working Americans losing their jobs at the ACO factory, at Meaningful Use Inc., and even at Stents-R-Us hospital here in my home town.

This is what you get when you make disease more profitable than health, when we treat problems instead of people.  The simple fact that our system would be destroyed if everyone got healthy should tell us something is terribly wrong.  Doctors want their offices full, not empty.  The goal of every patient – to be healthy and to stay away from the doctor – goes directly against the economics of “more.”

I have always tried to be a non-test orderer.  I was trained well by docs who believed it weak-minded and bad care to blithely order tests and prescribe medications without a well-defined reason.  This has always made it harder for me, as it’s far more time-consuming to explain why a drug or test is not needed than to simply order it.  But in my new world, one in which an empty office is a good thing, I’ve found my patients much more open to my aversion to “more.”  The main reason for this is that I am giving them more of me.  More of me means they can call if they don’t get better, or if their symptoms develop.  They know I won’t force them to take more of their time and spend more of their money to get my attention.

Ultimately, I want my patients to see as few doctors, be sick as infrequently, and be on as few drugs as possible.  I hope to wage an all-out assault on “more.”

Here are my rules to battle “more”:

I hope my new world of less overhead, less regulation, and less antacids for me continues on this trend toward less sick patients, less drugs, and less tests.  Perhaps I need to break into a song and dance number whenever my patients ask for “more.”

That would teach them.

Rob Lamberts is an internal medicine-pediatrics physician who blogs at More Musings (of a Distractible Kind).

Doctor owned hospitals: Are the rich getting richer?