The final day of last week’s TEDMED 2013 consisted of two sessions, tastefully interspersed with self-reflection and humor by the curators. The first session, “Hiding in Plain Sight,” looked forward to new developments in technology, and data analysis in particular, that can give us new capabilities in healthcare. 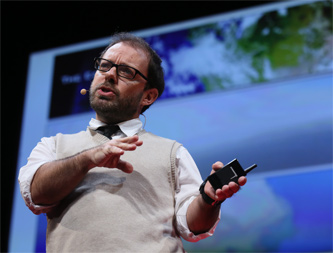 Computational physicist Mariano Vázquez discussed his work in creating a “computational world” with a supercomputer in a 400 year old church, and described techniques for envisioning these worlds to provide new ways of looking at the existing masses of data and put it in context in order to lead to new advances.

Parallel processing supercomputer algorithms have been created over the years to model all sorts of things, and many of those can be transferred to model the human body. He believes that one day we’ll be running simulations on individual patients to predict the future of disease using small computers that are as powerful as today’s supercomputers. 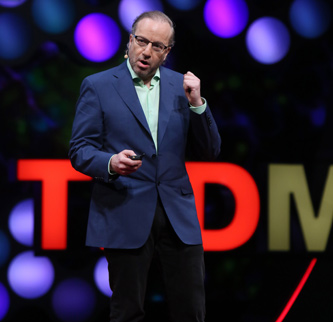 Isaac Kohane, the co-director of Harvard Medical School’s Center for Biomedical Informatics, described his work on using computational techniques to provide pharmacovigilance, or constant monitoring of the effects of new treatments within populations to determine if they are providing the help we expect them to for patients, as well as ensuring that they are not harming patients.

He calls this functional genomics and likens to the way weather patterns are interpreted to predict the paths of hurricanes and potential tornado activity. By monitoring patient data on a larger scale we can not only track infectious disease, but be able to spot unnoticed side effects of drugs and medical devices. His takeaway point is that we should “Make Our Data Count For Us.”

Next, Steve Gullans explained that up to 70% of cancer patients do not get the right doses of their medications and that in the quest to avoid high toxicity for a small subset of patients, we often do not give sufficient amounts of medications. This often leads us to give just enough to produce harmful side-effects, but too often not enough to help. He called for efforts to provide more personalized dosing of medications.

As one option to improve drug dosing for patients, he suggests personalized testing of toxicity in levels similar to what professional athletes undergo to screen for performance enhancing drugs.

Ending the session was Laura Deming, who began her talk with a deceptively simple statement:  “We are changing the way living things relate in time” and continued to explain how work in the biomedical sciences managed to radically increase the lifespan and health of laboratory animals and essentially changed their nature. 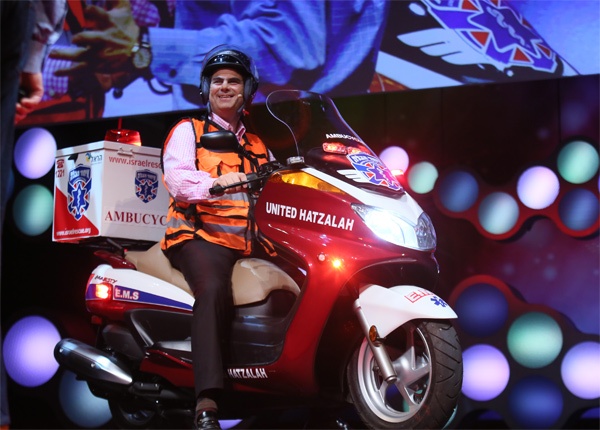 The final session of TEDMED 2013 was titled “Coming Together” and was focused on the application of new ideas and technology, as well as a summary of the entire 4 days of exploration and learning. The session began with Eli Beer, the founder of United Hatzalah roaring onto the stage and stating: “This is the Ambucycle! This is fastest way to reach any medical emergency.” This bike has a defibrillator, an oxygen tank, and just about everything a traditional ambulance has except a bed. Moreover, Beer described his efforts to make emergency medical care faster and more effective in Israel, and spreading that concept to the rest of the world.

United Hatzalah harnesses the efforts of thousands of volunteers to create “medical flashmobs” that can respond to emergencies faster than ambulances. Once a call comes into an emergency call center, volunteers who live around the area where someone needs assistance get information about the situation and immediately run to help out. They are trained in CPR and can help stabilize a patient before the ambulance arrives. Last year United Hatzalah responded to over 200,000 emergencies including 40,000 life threatening ones. The only thing we’re wondering is, why doesn’t this exist everywhere?

Victor Wang then reflected on the fact that “despite all these advances in communications, grandmother is lonely” and noted the need not just for technology, but also for human connection to improve caretaking in the 21st century. He discussed how we can look for ways to help new tools meet old needs and showed off robotic technology that can help bridge thousands of miles and address the developing problem of an aging population.

Artist Raghava KK, then asked all to be as expansive and open in gaining and sharing new knowledge, noting that “you can’t censor your thoughts” and that “art and science are two sides of the same body.” Then Erin Barker & Ben Lillie poked some gentle fun at TEDMED, explaining that the sight of “grown men in bean bag chairs” can be a frightening experience. Turning to a spiritual viewpoint, Richard Payne called attendees to recognize the “power of story and power of human imagination,” and to search for the “wisdom to use these gifts wisely” in healthcare. Finally storytellers Sara Peters and Peter Aguero masterfully gave a patient’s (and their partner’s) point of view of living with epilepsy, and the ordeal of having it diagnosed after days of waiting in the hospital for a seizure to happen while attached to diagnostic equipment. Finally, a wrap up was provided by Jay Walker and TEDMED 2013 was brought to a close.

We’d like to congratulate the organizers of TEDMED for another spectacular conference and continuing to foster a community devoted to improving the health and healthcare of people around the world.