We’re here at TEDMED 2013, excited to be part of a unique group of people passionate about the future of medicine and curious to walk the path that will take us there. We’ll be reporting through the rest of the week on the talks, demos, and people that make TEDMED the world’s premier medical conference.

The first session of TEDMED 2013 opened with performing artist Kishi Bashi setting the stage with music. That led the audience to, in the words of TEDMED curator Jay Walker, “being present” in the moment and ready to engage for the next few days with the presenters, delegates, and the ideas that permeate the Kennedy Center in Washington, D.C. this week. 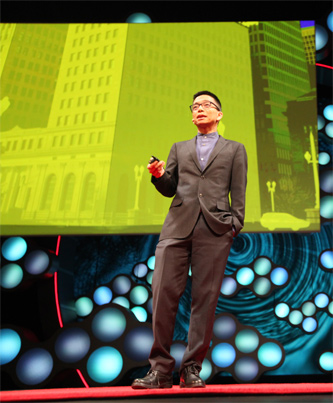 As the first presenter of the session, designer John Maeda began with a discussion of the intersection of leadership and design by stating that “leadership isn’t about going up the mountain, it’s about jumping off the mountain.” He continued with his observations about the ubiquitous need for design, and then focused on the ways that having an eye for design can help us understand effective systems and structures; in other words, his “5 Things About Design.” He then discussed how good design can help the healthcare industry. For Maeda, answer is art, which he admitted, based on his recent experience with surgery, is a bit paradoxical. As he stated, when you are a surgeon doing a procedure, “I don’t want you to be creative,” but instead to do the procedure in a standardized way. However, looking at the challenges that health care providers face today in terms of their barriers to successful practice, the primary questions we face are not just can we survive, but can we thrive? In Maeda’s words: “Art and design can help us thrive.”

After John Maeda’s talk, Jay Walker acknowledged the Boston Marathon bombings, stating that citizens were a critical part of the response. For example, runners donated blood right after finishing the marathon, running an extra mile to the donation location to do their share. TEDMEDLive was recognized, and Jay went on to describe his vision of TEDMED as a community. He also introduced the TEDMED editorial team and remarked on its diversity, and reiterated the value of a diverse community, including those from healthcare, education, business and other areas. 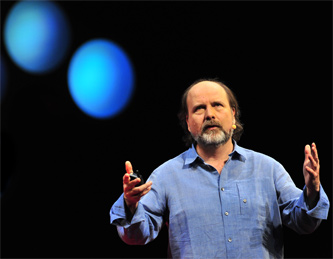 The next presenter, Danny Hillis, professor of research medicine at USC Keck School of Medicine and co-founder of Applied Minds, stated “I dreamed of becoming a physician” and recounted vivid memories of the streets of Calcutta, and his memories of people dealing with chronic disease without healthcare. In this struggle, the hospital was not the main event.

Ayurvedic medicine, the traditional medicine of India, was the primary way that the ordinary person dealt with that struggle. As he examined this traditional model of medicine with its focus on balance of humors, especially in contrast with Western medicine that focuses on a being in a state of either sickness or health. Though the Western medicine model of vaccination, sanitation, and antibiotics that served us so well in dealing with infectious disease was certainly effective, Hillis noted an aesthetic preference for the complex balanced view of seventy-two thousand nadis in intricate diagrams.

As he started his studies in modern neuroscience, he realized that the state of knowledge about the brain and nervous system was not really much better than seventy-two thousand nadis.

In his search for ways of understanding neuroscience, he was pulled into the artificial intelligence community where one could design intelligence and learn from it that way. There Hillis discovered not just the technology, but the data and models that he could use to study neural systems, and then finally the technology started to catch up to be able to look at the body. And as we look at the body, what we see is that the body is in a constant struggle against disease. He noted that when you can see what is going on with the patients, you can be preemptive, and that you can see the struggle before the body loses the battle, changing the way we look at the traditional “sickness and health.”

TEDMED’s clinical editor, Pritpal Tamber followed up Hillis talk with the observation that “good ideas not getting traction happens all too often in healthcare” and refocused the audience on that mission.

America Bracho then gave a stirring presentation on access to health care by underserved populations based on her work with Latino populations in her native Venezuela. She also discussed these ideas with Harvey Fineberg of the Institute of Medicine. 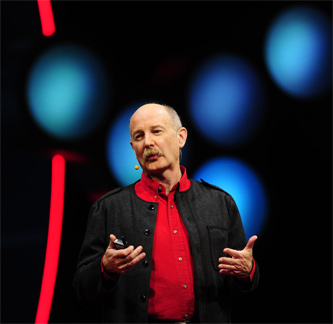 Rafael Yuste, originator of the Brain Activity Map (BAM) project, then gave an inspiring talk about the challenges and rewards of science. He compared his two passions: science and mountaineering. They are similar in that you need big goals, a passionate and committed team, and you must analyze the problem and plan a route, break your plan into small steps, and perhaps most importantly, always keep your eye on the ultimate goal. As he looked at scientific mountains to climb, mapping the brain seemed like the “Everest” standing before science. He noted that we still know very little about how the brain works, we treat brain symptoms only because we do not understand the causes of problems in the brain. This gave him the idea of the Brain Activity Map (BAM) project as the grand challenge of science of the 21st century.

In his view, these grand challenges show the role of science in our society, the role of moving knowledge forward, improving science as a business, building creativity. In Yuste’s view “Science has so many problems to solve, we can’t afford to dream small dreams.”

The remainder of the session was devoted to a short inspirational talk by the Surgeon General Regina Benjamin, and a vocal performance by a capella group Afro Blue.

Michael Moore is a medical student who blogs at The Lancet Student. This article originally appeared in Medgadget.

Medicine does not compel us to like everyone we treat

Who are the physicians that make the decision to deny care?