Politicians, financial experts, pundits and main street America would love to predict what’s going to happen to America in the next five years. But we don’t have to dust off the Dow Jones or the S&P, or even wonder what the Feds are going to do about Medicare, taxes, the debt ceiling or Afghanistan.

All we have to is understand the five stages of grief first developed by Dr. Elizabeth Kubler-Ross.

Elizabeth Kubler Ross was a Swiss American psychiatrist and author of On Death and Dying (1969) where she first discussed the five stages of grief. These five stages include denial, anger, bargaining, depression and acceptance, and were originally studied in people who were faced with a terminal diagnosis. Since then her work had been applied to the survivors of those who have died as well as many other difficult situations.

America is experiencing a crisis of grief, similar to that experienced by an individual whose family member has died. We can predict what will happen to America in the next five years, simply by applying Kubler-Ross’ stages of the grieving process to the collective experience of millions of citizens.

The first stage of grief is characterized by denial. “I can’t believe this is happening. Not to me.”

In the aftermath of 2008 financial crisis, America was characterized strongly by denial. The very instrument that created the crash, a housing bubble, was itself a form of denial. It’s been over 4 years, and many Americans still strongly deny that we have a problem.  A serious problem.

The second stage of the grieving process is characterized by anger. “How can this happen?! Who’s to blame?”

We can still hear the echoes of anger, frustration and blame propagated throughout the media today in surround sound. We’ve been outraged by 9/11, outraged by Iraq and Iran, outraged by Osama bin Lauden ,outraged by gun violence at Aurora, Columbine, Newtown and Virginia Tech. We seem to be angry at everyone else except ourselves, for causing our crisis.

Next, the grieving person may pass through a bargaining stage. “I’ll do anything for this to change.”

“If we cut spending and raise taxes, we’ll be able to balance our budget by 2023.”

“If we privatize Medicare, we will reduce the cost of healthcare through increased competition.”

Depression typically follows the stage of bargaining, especially when the reality of the situation comes to a head. “It’s no use. There’s nothing I can do about it.”

With the exception of Occupy Wall Street, a cry of anguish, many people feel they as individuals are powerless to affect change, especially when <1% of our population controls >40% of the total wealth in the country and growing. They might feel that systems and rules and policies must be followed, or are too well-entrenched to change, or that the powerful and rich will fight back, throw them in jail or otherwise hurt them. Many people who are older have accepted that they will die soon. They feel sorry for the next generation, but they themselves feel there is nothing more they can do.

The final Kubler-Ross stage of grief is acceptance.

In this last stage, the individual comes to some sort of resolution. They understand that things are going to be okay.

America seems to be stuck somewhere prior to this stage. Politicians are still trying to fix things, using smoke and mirrors to proclaim that we will be in the “black” in a few years if we just “stay the course.” With respect to healthcare and other unfunded entitlements, a major debt obligation, America still hasn’t accepted the reality that there is no more money left for 64 million retirees to cash in on promises their government made in the 60’s.

We still seem to be waiting wide-eyed and breathless for a “Rosa Parks” incident, or someone else to step up to the stage, an Arab Spring or another Occupy Wall Street, only this time more organized.

We still see to be waiting for something or someone else to change our current situation.

When an individual is stuck at any one of the Kubler-Ross stages, they are never able to progress or move ahead toward concrete solutions. They remain stuck, shifting back and forth through any one of the main stages at any one time. But it is only at full acceptance by a critical mass of people that poor America will finally begin to reclaim some of her stature, and create a different future.

Now that you have been able to predict America’s future by using the Elisabeth Kubler-Ross model, the final question remains with you, an individual who is a component part of the whole country called America.

Which stage are you stuck in?

Natasha Deonarain is the founder of The Health Conscious Movement. She is the author of the upcoming book, The 7 Principles of Health and can be reached on Twitter @HealthMovement. 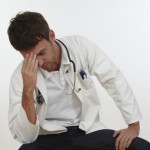 America is experiencing a crisis of grief
9 comments