My kid and I are outside in the front yard blowing bubbles, enjoying the blue skies and 70 degree weather when she says, “Cool Daddy! Look, there’s a police car coming down the street. Oh, cool! I think he’s coming to see us!”

Uh, oh, I think to myself. Despite my kid’s excitement, I know that rarely does anything good come delivered by a policeman. My wife is inside, my one kid is with me and my other is inside, so they’re not coming to give me some tragic news. Or are they? My parents … my siblings … is everyone okay? Why is a sheriff pulling into my driveway?

I exhale for a minute. Maybe it’s Jim, the officer that lives in the neighborhood, I think to myself. He’s probably just stopping by to chat or say, “Hi.” As the car rolls closer, squinting to look beyond the window glare I see that it’s not Jim. It’s an officer I’ve never seen before. Clearly none of us has done anything to get arrested.

“Daddy! I wanna go see inside the police car! Daddy, will he give us a ride? Ooh, ooh, can I see his gun? Cool!” says my kid, jumping up and down with excitement.

The driver door opens. A huge officer gets out, in grey uniform, bulletproof vest bulging underneath, with black wrap-around sunglasses, and a toothpick in his mouth.

“Are you Dr. Bird?” he asks, as serious as a heart attack.

“I got a present for ya,” he says, as he pulls a thick rolled up stack of paper from under his arm and hands it to me.  “Here’s your subpoena,” he says.

“You’re getting …” he starts before,

“Daddy! Daddy! I wanna ride in the police car. I wanna see the lights go on! Yay!” says my little one.

“… sued,” I finish the sentence for him.

“Yes, sir. You and every other doctor in this county it seems like. I’ve got about a dozen more to go serve. These lawyers are unbelievable. (laugh) I happen to know this one will sue you for breathin’ and win, too. You know, the one on the back of the yellow pages? You ever run into any trouble, though, you call him. Trust me, he got me out of a jam one time,” he says with another grunt-laugh.

“Wow. Thanks for that wonderful advice. You’ve really brightened my day,” I snark back at this guy, who apparently thinks it’s hilarious to be part-time process server and part-time comedian.

“Oh, don’t take it personally. It’s just business,” he says chuckling, as he spits out the same old lie and cliché I’ve heard a thousand times from doctors who’ve been sued.

“That’s great. Thanks. Anything else I can do for you today, officer?” I ask, dejected.

“Oh, yeah, I’m gonna have to give you a ticket for parking your car on the street overnight … Just kidding!” he says, and give’s a snort-laugh.

This guy’s unbelievable, I think to myself as I turn to walk away.

“Don’t worry, Doc. You’ll win that case. That lawyer will sue a dead dog if he could get it to settle for a bone and a biscuit,” he says.

“Uh, thanks for your … uh, support,” I say, shaking my head in disbelief.

I walked inside and ripped through the pages and start reading about the case of which I have zero recollection. What? This? This is nothing. This is ridiculous, I think to myself. Where’s the malpractice? Where the h—l did I not do everything as I was taught, as I should have and as I would do again?

I can’t find the malpractice, because it’s not there.

Almost every day in my training, it was either implied to me, or I was explicitly told that someday, no matter how perfectly I practiced, no matter whether I met or exceeded the standard of care, that I would be falsely accused of malpractice someday and be sued. In each of those teaching moments, I was told how to practice so as to decrease the chances of such a false accusation and how to document, so as to be able to fight the inevitable false accusation in court. Never once was I told, or was it implied that it wouldn’t happen.

Though these words were never spoken, the unspoken lesson was: You are getting excellent training. You are going to be an excellent doctor. You will be prepared to handle any situation thrown at you. You will go out into the real world and do your best with every patient you see, and one day you will be sued for it, and possibly put on trial. I trained at a top notch institution. My teachers were right.

Over the next week, I obsessed about the case. Over and over and over again, it ran through my head, what would I have done different? I can think of all kinds of things I could have done differently, but none of them seemed better, or even equally as appropriate as what I did. In my head I kept hearing the mantras of physicians that have walked the plank of false medical malpractice allegations before me, “It’s the cost of doing business,” “It’s not about you, it’s about money,” “It’s not personal,” “Every doctor gets sued.” Yeah, bulls—t, I thought to myself. The more I thought about it the more it infuriated me.

Also, reading through the record, I couldn’t help but think, of all the patients I’ve seen, why this one? There’s nothing here, nothing at all. Not only did I not commit malpractice, I cannot see where any of the other providers even might have or possibly committed malpractice.

As the months went on, I went through the “process.” I met with my lawyer. I reviewed the record ad nauseum. I read every bit of literature about this case I could find. The more I read, the more I was certain I did nothing wrong. The more I thought about it, the more I realized that didn’t matter. Also, the more I was told and the more I told myself it “wasn’t personal” and “was just the cost of doing business” the more I took it personally. It is personal. When you dedicate your life to helping people, often times without payment, often times at 3 a.m. dog tired, on your kids birthday or your third holiday in a row, and it’s routine business that you’ll be extorted for money just for doing your job and doing it well, you’re damn right it’s personal.

Along came the depositions. The plaintiff deposed their “expert” who plainly put, was not an expert. He was a hired gun, paid thousands of easy dollars, to testify that everything I and my co-defendants did was absolutely wrong. Also, he was of a completely different specialty than my own. His testimony was laughable. His answers seemed to indicate he hadn’t even read the evidence closely or at all. Regardless of how bogus his testimony was, my attorney tells me, he made enough (false) accusations to get the case to trial.

One by one, our experts line up drooling to testify that their expert was absolutely wrong. They had the truth on their side and they were actual experts. But would the jury understand? Whose “experts” would they believe? As strong as my case was, I resigned myself to the fact that that’s what the case would come down to. Not what was right, or what was wrong, but whom the jury chose to believe, for whatever reason they chose to believe him. As difficult as it can be to judge another physician in a different specialty I can only imagine how difficult of a task it is for a jury with no medical background to judge the decision making process of a physician, in a complex medical case. How many times have you gone to an M&M conference and a dozen experts argue over a case with a bad outcome and even those highly trained experts couldn’t agree on what the “standard of care is” let alone whether or not it was met?

Over months, the trial draws closer. My tension waxes and wanes, fades and returns with each deposition, each email from my attorney and with any patient encounter that reminds me of the case. Ultimately as the trial closes in on me, the tension builds. All the while, I know I met…No, I exceeded the standard of care. As the trial date gets closer, the more I realize how little that may matter. How would I come across to a jury? I’ve never been on trial. I know I’ll be very nervous on the stand. Will that be seen as appearing “guilty” or will the jury understand and see my side of things?

I get an email from my lawyer. “Just to let you know, the trial date is set. There will be a routine mediation meeting tomorrow. You do not need to attend. We are taking this to trial. You did nothing wrong. We will fight this every step of the way.” Deep breathe, exhale.

The next day, breaking the silence comes a “ding.” It’s an email on my phone. I open the inbox, and I see two words that shock me:

“The charges against you have been dropped. No money will be paid on your behalf. There will be no trial. Congratulations. You are dismissed with prejudice.”

I could hear and feel the air start to leak out of the balloon of pressure hanging over my head: “Dismissed with prejudice.” I ask my lawyer to translate: that means “Over. Permanently. Done. You are innocent. You won.”

Well, it didn’t feel like a “win,” but it was over.  I was relieved not to have to roll the dice.  Even though I was vindicated, there was no “win” in being falsely accused of committing malpractice considering all the time spent reviewing charts, attending legal meetings and depositions, and all the mental stress and sleepless nights.  Others have said that although a dropped lawsuit is a win in a literal sense, it is a great loss for patients and doctors because it drives a harmful and dangerous wedge in the physician/patient relationship.  As I progressed forward from this point on, I truly understood how true this is. I couldn’t help but feel that from then on, memories of this lawsuit and the process would be irreversibly intertwined with each patient interaction, each handshake, each differential diagnosis and treatment plan, as much if not more than the science, pathophysiology and the textbooks I read. 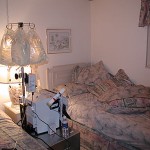