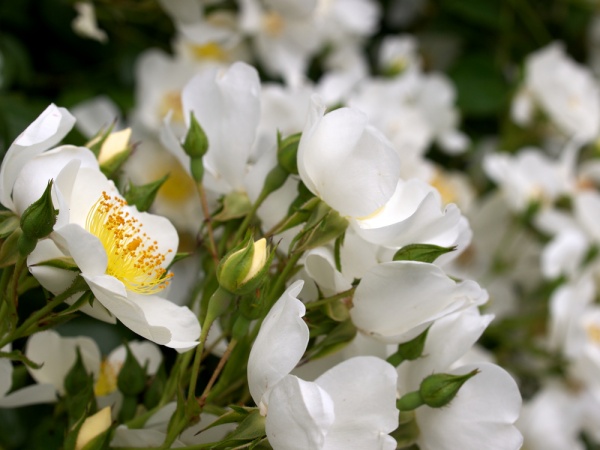 “Look at all those beautiful little white flowers,” I said to my wife. “I don’t remember seeing them there before.”

In the neglected ten-by-thirty foot corner of our garden, a crop of white flowers began to emerge toward the end of the summer.

“You never saw them because they are weeds,” my wife said.

“Weeds aren’t always ugly, but even the pretty ones grow fast enough to choke out the other flowers,” my wife reminded me.

“But they are growing so well there.”

“That’s what weeds do—they get in while you are not looking and take over everything.”

“Don’t you even think about going out and pulling those weeds,” I growled. “I will do it myself…damn weeds.”

My wife’s recently diagnosed leukemia had weakened her immune system. She spent most of the summer in bed—recovering from the fatigue of the disease and the nausea of the treatment.

And somehow, while I was taking care of everybody’s cancer, leukemia had crept into my home and attacked my wife’s body. For months, I had missed the telltale signs of fatigue and malaise, chalking them up to day-to-day stresses of motherhood. When the diagnosis came, she crumbled; and I went into survival mode. I watched as my wife struggled to climb the stairs like a sick person, stopping halfway to a landing. I saw as they started an IV and observed the red blood cell transfusion dripping into her veins easing her fatigue. I rubbed her back when she threw up the life sustaining pills that were just too big to get down. And I put her to bed and cuddled her, like I did with the children, to ease her fear. I couldn’t do anything real except simply be there. And just when things seem to improve, a simple walk in the yard led to a simple scrape on the shin which led to a complicated skin infection (cellulitis to those of us in the know) which led to several doctor visits, and threats of hospitalization.

“I wasn’t planning to do any work in the garden. I’ve learned my lesson. But what am I supposed to do? Sit in the house all day?” she asked.

“No, but you must protect yourself, wears gloves, and long pants when you go out for this sort of thing. Life has changed for us, and I can’t afford to have you in the hospital because you are too selfish to give up gardening or too stubborn to wear gloves!” I grumbled.

“Well I don’t need to have you hollering at me in my own back garden.” She turned and headed for the house.

I remained … and looked at this impenetrable hedge of pretty little white flowers which grew as tall as me. And I began to pull. And I tore at the earth ripping out every lost opportunity. And I reaped a harvest of the pain of the possibility of my daughters’ weddings without a mother-of-the-bride. And I clawed at the anger of the chance of going to my girls’ graduations alone. And I scratched and groveled at the ground pulling and tearing weeds half crazed with a mission to reclaim this little corner of the garden. Dirt flew into my hair and clothes and mouth. And sweat stained my clothes and streaked my face. My eyes burned with salt and dirt and my flesh tore from unseen pickers. And my quiet whimpers grew into audible sobs and heaves until I was startled by my 10-year old.

“Are you okay dad?” she asked.

“Dads don’t cry. They get allergies.”

She always knew when I needed a hug. “I think I do.”

My tiny little 10-year old jumped into my arms and hugged me closely to her.

“Love hurts, Dad.” She giggled as she ran back to her tree house vanishing as quickly as she had appeared.

When I looked up, I had thrashed through the entire bank of weeds. My wife’s accounting background allowed us to quantify gardening performed by the number of green trash bags filled. I had 16. It was more than that though. The irony had not escaped me. I had managed to protect and preserve just a little corner of my life which had been taken over by some outside uninvited monster. A once impenetrable scourge of weeds were untimely ripped and tossed away in a neat row of bulging green trash bags.

And when I was done, the once beautiful white flowered hedge was barren and desolate. It looked far better before I had taken out my anger on it. Now a wasteland plowed under at the end of the growing season, the little corner held the promise of a better next year without god damned weeds choking everything out.

My wife returned as if on cue. “Look there,” I said proudly. “Sixteen bags.”

“What are you doing? I was going to have it bulldozed,” she said.

“But you lose the English ivy that away.”

“You do know that garden is loaded with poison ivy.”

How the physician replaced the medical secretary 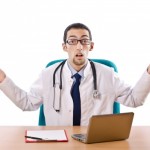