Sometimes, you can see cancer coming.  What I mean is that when we sign up for that mammogram, or that PSA blood test, there has to be some tiny little part of us that says, “Ok, this time it’s my turn. This time I’m the one who’s going to get the call.”

Sometimes the cancer sneaks up on us—that nagging little cough that makes us want to—suddenly and belatedly—quit smoking. Or that little bit of blood in the stool that we’d rather think is a hemorrhoid, or that lump in the neck that doesn’t go away even when our doctor treats us for the strep throat that we know we don’t have. But sometimes, as it happened to my patients yesterday, that cancer hits us like a freight train. Just flattens us and leaves us in fragments, speechless in surprise and terror. And when that train hits, we know in an instant that life will never be the same again.

I had two of the freight train kind of patients yesterday. The first was a man in his 70’s, previously healthy, an avid stamp collector. One day in August, he suddenly had difficulty finding his words. A CT scan done without contrast dye showed no stroke or bleed in his brain, and he was sent home from the emergency room.

His wife persisted with the primary care doctor—”My husband is just not right!” she said, and last month an MRI was ordered which revealed a large ugly looking brain tumor, and the patient was taken to surgery. The pathology returned as glioblastoma multiforme, the most aggressive type of brain cancer. He was seen in outpatient oncology clinic by a young neuro-oncologist, just out of his training. By the time the patient came to me, every shred of hope was gone. The man, still having difficulty with his speech, told me that the doctor said that at most, he would live a year, if he chose treatment, a few months if he did not. He said that the doctor told him that the tumor would spread like a spider web over his brain, and that he would lose all function. The patient cried when he told me this.

The second patient was a very fit man in his early sixties, a retired school teacher who had surfed and been a life guard all his life. In July, he had a surfing accident (his wife said, “Can you believe it? He surfed some of the greatest waves in the world and he wiped out in two feet of water here at home.”) He broke his collarbone in three places, which required surgery to repair. His pain got worse however, and he started to have back pain. Spine films showed a compression fracture, also thought to be related to the accident. As this tan, fit, athletic man began to seek more and more narcotics for his pain, an MRI of the spine was obtained, which showed the bones to be brittle and riddled with tumors. Yesterday the biopsy of his sacroiliac area came back positive for multiple myeloma, a disease of plasma cells in the bone marrow which destroys the bones that cultivate it. In an instant, this nice couple’s dreams of a happy retirement were shattered.

When we first moved to the West Coast, I was offered two very different jobs. In one practice, I was to be the person that rotated through six different outpatient facilities, covering the regular doctor’s vacations. I would see the patients for consultation, and perhaps treatment planning, but would never see them through their treatment or in follow up. The other job was a hospital based practice where I would be the director of the department and have longitudinal care of the patients. I chose the second, of course, because being the linear task oriented person that I am, I could not conceive of not seeing each patient through from start to finish to follow up.

I see things differently now, twenty years later. I have a calling in life. I want to be there when that freight train hits. I know I can put the pieces back together, and I know that when that shattered patient leaves my office, for the first time in hours, or days, he will be able to notice the sun shining in our Southern California sky, and taste a faint flavor of salt on the warm breeze flowing from the Pacific. In turn, I will have the deep satisfaction of knowing that I did something good that particular day. And that, actually, is quite enough.

Mean doctors and nice nurses: It's time to change our brand 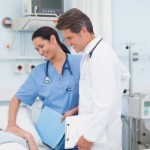