Most of us will not have the opportunity to just die of “old age” or to simply fall to sleep one night never to wake again. Most often, we develop an illness which causes our death. These have changed markedly over the years. For the pioneers, accidents, infections, childbirth were times and causes of great likelihood of death. A century ago, infections were the leading causes of death. Today, we will probably survive much longer than our ancestors but it is more likely we will die of heart disease, cancer or stroke. This is a dramatic change in the causes of death that has occurred over the years and with it is an equally dramatic change in the factors that predispose to those deaths.

The New England Journal of Medicine, arguably the most influential medical journal of our times, is celebrating its 200th year of publication with some special articles. A recent one called “The Burden of Disease and The Changing Task of Medicine” by Jones, Podolsky and Greene looked at the changes in causes of death from 1812 to today. The changes are not really surprising but worth contemplating.

In 1812 the city of Boston recorded 992 deaths of which the greatest number by far were due to “consumption.” Various other fevers combined were the next most common. Cancer killed five and sudden death (heart attacks?) took 25.

The following graphic from the article tells the story from 1900 to today succinctly. 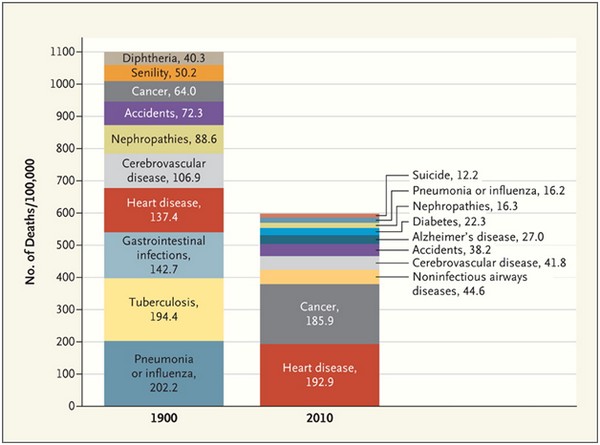 In 1900, infections topped the list with pneumonia, tuberculosis and gastrointestinal illnesses (mostly typhoid) being the most common causes of death followed by heart, stroke, kidney, accident and only then cancer. This was the time when the microbial origin of infections was now well appreciated and major advances in preventing illness came from the work of sanitary engineers with safe water and effective sewerage systems. Modern obstetrical approaches, including hand washing, had already markedly reduced the chances for maternal and infant mortality. Likewise, vaccines were being developed against some of the most serious infections; a vaccine for number ten on the list, diphtheria, would come soon.

Today the top ten list as we all know is capped by heart disease and cancer, followed by substantially lesser numbers of chronic lung disease and stroke. Infection, namely pneumonia, is well down the list. Tuberculosis is off the top ten list. But the graph tells us more. Pneumonia and influenza dropped from 202 to 16 per 100,000 population. Death from heart disease rose from 137 to 199 and cancer increased from 64 to 186 per 100,000 population.

Although published a decade ago, a paper in the Journal of the American Medical Association by Mokadad, et al from the Centers for Disease Control is relevant in pointing out that the predisposing factors to today’s causes of death are ones that can be modified to prevent these illnesses. In 2000, the leading causes of death were directly related to: tobacco use, poor diet, physical inactivity, alcohol abuse, infection, toxic agents, motor vehicle accidents, firearms, sexual behaviors and illicit drug use. Most of these are behaviors that could be modified. The authors concluded “These analyses show that smoking remains the leading cause of mortality. However, poor diet and physical inactivity may soon overtake tobacco as the leading cause of death. These findings, along with escalating health care costs and aging population, argue persuasively that the need to establish a more preventive orientation in the US health care and public health systems has become more urgent.”

As described in The Future of Health Care Delivery, industry has found that some 70% health care costs to the employer is due to modifiable behaviors and some two thirds or more of these expenditures go to managing just four diseases – cardiovascular, cancer, diabetes and obesity. This in turn has driven the inauguration of workplace wellness programs especially for smoking cessation, diet education, fitness and stress management.

As our population rapidly ages there will be increasing numbers of the chronic diseases that come with aging such as visual and hearing dysfunction, mobility problems, arthritis and Alzheimer’s. And as society persists in eating a non-nutritious diet and too much of it, avoiding exercise, having chronic stress and (20%) smoking there will be literal epidemics of obesity, hypertension, coronary artery disease, stroke, chronic lung and kidney disease and cancer. Just as sanitation and vaccines made a huge impact on the diseases of a century ago, so too could aggressive preventive measures to assure health and wellness make a difference in this century.

What is evident is that the causes of death have switched from acute illnesses to chronic illnesses. And we know from insurance companies that chronic illnesses consume about 70-85% of claims paid. What is less well appreciated is that our medical care delivery system was established over the years to deal with acute illness and for one provider to care for one patient. In this regard, think of the internist who treats a pneumonia with an antibiotic or the surgeon who cures a patient by removing the appendix. But patients with complex chronic illnesses need not one doctor but a multi-specialist team to give the best possible care. And the team needs to be well coordinated, probably by the primary care physician or in the case of some situations by a specialist. In both circumstances the coordinator directs – orchestrates – the entire team to offer the patient the highest quality at the least expense. This is a change in how care is delivered that needs to fully occur as illnesses have increasingly become chronic, complex, life long, difficult to manage and expensive to treat.

The authors of the article noted that “In many respects, our medical systems are best suited to diseases of the past, not those of the present or future. We must continue to adapt health systems and health policy as the burden of disease evolves.”

I would argue that our two most pressing issues are to assure good care coordination of a multi-specialty team for those with chronic illnesses and markedly increase societal efforts to adjust lifestyles to ones that will prevent these diseases from occurring in the first place.

Stephen C. Schimpff is an internist, professor of medicine and public policy, former CEO of the University of Maryland Medical Center and is chair of the advisory committee for Sanovas, Inc. and the author of The Future of Medicine – Megatrends in Healthcare and The Future of Health Care Delivery- Why It Must Change and How It Will Affect You from which this post is partially adapted.

Learning about patients as a phlebotomist

Does our caring crush the ones for whom we care?

The dramatic change in the causes of death
6 comments