The following post was written on February 27, 2010, while working as a volunteer in a field hospital in Haiti. It was called Love a Child Recovery Center and it was run by us (Albert Einstein Hospital – São Paulo – Brazil), Harvard Medical School and University of Chicago Medical School.

We have, according to the census, 39 patients under our care today. This amount represents 15% of the total number of patients in the field hospital. Still, the number of family tragedies is uncountable. 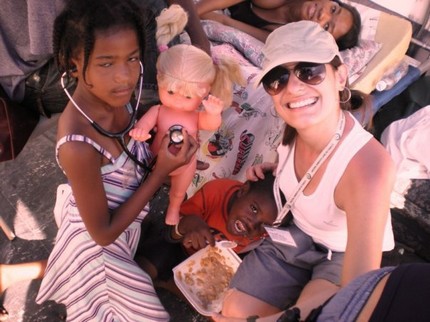 While entering one of the tents during the morning rounds, I laid my eyes on a skinny and smiling 15 year young man. Some locals had already told me that this boy was trapped under the earthquake wreckage for days, with his family. And that both him and his father were forced to watch the slow and painful death of his mother, while stuck in the ruins. When they finally managed to escape, they carried the corpse for three days aimlessly through the destroyed streets, searching for a decent place to bury her. Being unable to find one, they were forced to make one of the toughest decisions of their lives: leave her in the street and move forward in the struggle for survival.

When I asked the young man how he felt, he answered “God wanted this to happen in my life for a reason. I am very grateful for having had the chance to continue to living it. I’m fine. ” And, on my way out of that hot and dusty tent, I heard father and son heard chanting a prayer with excitement.

It was then, amidst all that dust, pain, mutilation and misery, when I realized the powerful presence and importance that music has on the lives of the people in Haiti. The sound of melodies is constant. Whether in tents, where families spend time and distract themselves from the pain while singing songs about hope; in the streets, where women motivate themselves to do their laundry chanting prayers in unison; in the tiny radios inside the tents and in the night meetings, where the locals sing, pray and dance, with or without crutches, with great enthusiasm. Much more than vitamins and painkillers, I conclude that musical notes are the most power and effective adjuncts to the treatments performed here.

I couldn’t help but remembering the words of Aldous Huxley, who said that “after silence, music is what comes closest to expressing the inexpressible.”

In my second day in Haiti, I am beginning to doubt it was him, and not a Haitian, who said that.

The power of music at a hospital in Haiti
1 comments