About one third of all births in the contemporary United States occur via c-section.  Physicians and the public at large often attribute this to a “malpractice crisis,” whereby obstetricians perform c-sections routinely to avoid malpractice litigation.  Over the last couple of years, I have been conducting research on obstetric practices and malpractice.

One of the things that I have learned is that, like many “common sense” beliefs, the belief that a high risk of malpractice litigation has caused the rise in cesarean delivery rates is empirically false.

First, there is a myth that malpractice lawsuits have become increasingly common in American obstetrics.  The simple fact, however, is that cesarean rates in the United States have increased for 12 consecutive years, while malpractice litigation has remained the same or decreased.  Data from the National Practitioners Data Bank reveals that obstetric malpractice suits fluctuated from 1991-2004 rather than increasing over time.  (See graph below.)  This is not what one would expect if a malpractice crisis were causing the rise in cesarean rates. 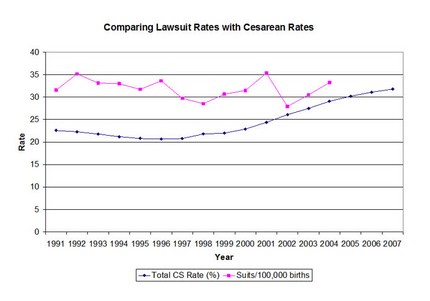 In addition to examining data on lawsuits, I am interviewing malpractice attorneys and birth attendants.  I interviewed “Jane,” a malpractice defense attorney (i.e. represents physicians) who has practiced for 15 years.  She said that the number of cases has declined over time because they are costly for plaintiffs and their lawyers to pursue:

In the beginning of my practice, they were going up because of fetal heart tracings. For the first time, the plaintiff’s counsel had something seemingly concrete to look at and to be able to point to. But in the last, probably six years, they have decreased. I think that’s because all types of cases have decreased… Basically, I think it’s that the cases have gotten so costly to pursue.

Another malpractice defense attorney, “Paul,” had practiced over 30 years and said that malpractice cases have declined overall by 30-40% in recent years, both locally and nationally.  He also viewed this decline as largely due to the high cost of filing suits and not tort reform, which his state does not have.  “The cost has also limited the number of players” so that there are few attorneys available to represent malpractice cases.  The only cases those attorneys take are those with clear liability and substantial damages that are likely to produce large awards.  As a result, many victims of negligence are unable to find a lawyer to represent them because of the costs.  The fact that the volume of cases has declined and only the clearest cases of negligence and malfeasance find legal representation contradicts claims that growing malpractice risks are leading to a rise in defensive cesarean deliveries,.

Secondly, in addition to my own research findings, there is published empirical research that reveals that malpractice liability is not the cause of rising cesarean rates.  Dranove and Watanabe found that obstetricians who experienced claims against themselves or heard about cases against their immediate colleagues increased their c-section rates for a very short period after the claim.  However, these increases were too small and too short-lived to cause the dramatic increase in cesareans that has occurred in the U.S. over time.  (Also, if suits are down in number, then this small effect should be present for a declining number of obstetricians over time.)

Recent research also suggests that tort laws influence cesarean deliveries in somewhat unexpected ways: reform of the Joint and Several Liability (JSL) rule (also known as the “deep pockets rule”) reduces cesareans, while caps on non-economic damages increase them.  This contradicts arguments in favor of tort reform, which suggest that capping non-economic damages will put obstetricians at lower risk of malpractice litigation and thus reduce the c-section rate.  In fact, cesareans increase when damages are capped and the risk of litigation is reduced – the opposite of what one would expect if a primary cause of the high rate of cesareans is litigation risk.

Also, cesarean rates decline when obstetricians are more accountable for the quality of care that they provide (reform of the JSL rule means that plaintiffs can only sue those who are directly responsible for negligence and not the organizations that they work for).  JSL reform tends to increase the connection between quality of care and liability, thus encouraging providers to be more careful. This suggests cesareans do not represent a cautious approach and may indicate poor quality care (Currie and MacLeod 2008).

In a nutshell, the idea of predatory trial lawyers might make a convenient scapegoat, but the actual risk of malpractice litigation has no effect on cesarean sections.  It seems more plausible that an unfounded fear of malpractice litigation leads to defensive practices that are totally out of proportion to the actual risk.  There is plenty of evidence for this fear.  A 2004 ABC interview revealed this:

In hospitals, the lawyers have bred so much fear that patients now suffer more pain, and may be less safe because doctors are concerned about being sued. “That fear is always there,” said obstetrics professor Dr. Edgar Mandeville. “Everybody walks in mortal fear of being sued.”

Some local doctors say that the surgery is a safer option for them than the risk of a botched delivery that could lead to a Florida medical malpractice lawsuit. The majority of obstetricians in the county no longer have liability coverage because it is too expensive.

Obstetricians interviewed by Wendy Simonds similarly expressed a tendency to intervene in birth because of litigation fears.  This fear may be felt as very real and may drive behavior, but the data are clear: fears of litigation are largely not grounded in actual risk.  Moreover, these fears do not justify subjecting millions of women to unnecessary surgery, which violates medical ethics and pregnant women’s human rights.  Practitioners’ fears would not justify this even if malpractice litigation were as common as people believe.

Louise Marie Roth is an Associate Professor of Sociology at the University of Arizona and author of Selling Women Short: Gender Inequality on Wall Street. This post originally appeared on The Unnecesarean.

How cocaine can be used in sinus surgery

Save time and money with your visit with healthcare providers

Are malpractice lawsuits really responsible for the rise in C-sections?
61 comments