An excerpt from Doctor Zhulik.

“You know, you’re the worst f*cking intern I have ever seen.”

“I don’t know why the hell you’re even trying to become a surgeon, Appleby. You have the manual dexterity of a chimpanzee.” A heavy man, Bernstein’s belly burst out of the gown, threatening to push the patient with his gaping abdominal hole off the operating table. Whenever he talked, the mask contorted like a sweaty muppet and I had to stifle a laugh. He continued his diatribe.

“Put your hand here. No, here, dumbass. Yes, hold that back. Good, like the well-trained monkey you are. For Christmas, you might consider asking Santa for some f*cking skills.”

Holy sh*t, why did I have to be with Bernstein? Oh yeah, low man on the totum pole, perpetually drawing the short stick. Bernstein believed his cases to be the most complex of any surgeon in the hospital. Unfortunately for him the chair of the department, Kingsley, reigned supreme and automatically rated the chief resident as a first assist. Besides, everyone knew to avoid Bernstein because, well, he’s a douchebag, as you’ve already seen. And that left little old me, the intern, to assist him. My presence in his case was a personal affront; he frequently reminded me of this.

“I don’t see why I always get an intern. My cases are far more rare than whatever mundane crap Kingsley happens to be doing.”

It’s because you’re an insufferable piece of sh*t. My head snapped up because in my sleep-deprived mind I was terrifyingly unsure if I spoke the last aloud. Bernstein looked at me sharply.

“You’re not falling asleep on me, are you, f*ckwad?”

I breathed a sigh of relief. “No, sir.” Still have control over my powers of speech.

“Why is it you’re so tired, anyway? I mean, you guys got it f*ckin’ easy. When I was coming up, we had to do every other. And back then the attendings would insult us and say the only problem with being on call every other night is you miss half the action.”

Even with his abuse, I couldn’t keep my eyes open. I wanted to throttle this pompous bastard and ask him how he would juggle intern duties along with all the major headaches of a hospital administrator, scheduler, and finance counselor. But then I’d have to tell him everything I was up to my eyeballs in, and I didn’t have a bag packed for prison.

“Jesus, you’re not even paying attention.”

The insistent beep of a pager shook me from my upright stupor. Bernstein and his scrub nurse assistant stopped what they were doing. I looked over at one of the floating scrub nurses who stood by the wall documenting something or other.

“Can you please see who that is?”

She produced such an elaborate eye roll I wanted to break scrub just to applause. Her behavior contrasted starkly with the nurses in OR 8; then again, the right financial motivation changes everyone’s behavior.

With torturously slow movements, she checked the page.

I looked at Bernstein and spoke to the nurse. “You gotta answer that.”

As if moving through molasses, she picked up the phone and called.

Bernstein didn’t proceed with the case, milking the opportunity to sigh dramatically at the horrible interruption of his virtuoso performance.

I didn’t even rate a name.

She cupped the phone. “They’ve got a trauma coming in and need you there to help.”

She turned back to the phone, and Bernstein returned his hands to the abdominal depths of the poor tabled bastard.

Not two seconds later, another beep of a different sort, though equally loud and annoying, went off on my right hip under my surgical gown.

“Now, what the f*ck?” Bernstein whipped a clamp at the floor in disgust. “Is that another pager, you dumb sh*t?”

“I’m on for two services.” Understatement of the year. My eyes implored the float to come and check this new message. She had to engage in a burlesque-style hunt under my gowns for the pager, and then, of course, it caught on my scrub bottom’s stringy waistline and forced us to sway together to unhook it. I performed a dramatic belly dance and, at last, drew a smile from the nurses. Bernstein maintained his scowl, visible even underneath his mask.

She looked at the pager and frowned.

I disengaged my deformed claw from the retractor and began pulling my gown off.

“What the f*ck, dickwad? You can’t leave here. I need your assist.”

“I’m sorry, Dr. Bernstein. I have to go, no choice.” I hustled over and collected my other pager. I wished a Merry Christmas to the circulating and scrub nurses and to the anesthesiologist. Not to Bernstein, though. Besides his being Jewish, he looked like he wanted nothing more than to throttle me. So I got the hell out of there before he could throw an instrument at me. As it was, his cursing followed me down the OR hallway until I exited the surgical suites and the soundproof doors closed behind me.

The glass doors whooshed open to a blast of frigid air. I buttoned up my white coat futilely against the elements.   The frozen wind cut right through me to the bone. Bundling it tighter around me, I regarded the blood scattered all over my once lily-white coat and one drop so brazen it covered up the latter half of my stenciled name so that only ‘App’ showed.

Though it seemed too cold to snow, flakes descended in fits and starts. Shuddering, I stepped out into the night, craving the fresh air for renewal. A distant part of me recalled hearing the weatherlady talking from the TV in a patient’s room, something about an Arctic blast lasting long enough to turn the city into a deep freezer. One benefit – the frigid air dampened the everpresent malodors emanating from the rear of the ER: exhaust mixed with dumpsters overflowing with garbage. And one other note on top, a skunky smell.

The expiring night was overfilled with emotional grenades. My addled thoughts vacillated between fear and pride – I’d saved his life, after all. That had to count for something. I didn’t know if it meant a reprieve, but it had to count; it just had to.

A faint hint of dawn appeared on the horizon. I walked into the parking lot and lit a cigarette just in front of the no-smoking sign. The gears of my consciousness were grinding like an engine with no motor oil. I’d gotten hooked on some super Quaker State sh*t, and then it was gone. In its absence, the profound withdrawal caused my brain to lock up.

The hairs in my nostrils froze despite the fire beneath my nose. Deciding to pack it in, I stubbed out the Camel underfoot when I noticed a black SUV startup. I probably wouldn’t have paid much attention were it not for those spinning rims, you know, the kind that rotate at a  slower pace than the wheels. Mesmerizing. Paralyzing, as it were.

They didn’t turn the headlights on.

They shouldn’t drive like that; could be dangerous with the dark and snow.

Ah, but, who’ll be on the road this early?

The windows rolled down as it drove by slowly, and smoke billowed out.

Scattered snowflakes assaulted my eyes, and through my squinted eyes, I caught a flicker of the driver. Time slowed to a crawl in that moment, my unconscious mind reacting in alarm to a feared stimulus – the barrel of a handgun poking its way out of the darkness.

I don’t recall hearing anything, but the muzzle flashes permanently imprinted on my mind like old-timey photographs. The impact rocked me off my feet, and as I fell backward toward the ground, the last thought I had was the hope that Ray had enough cocaine on board to tackle another trauma.

Joseph Baskin is a psychiatrist and author of Doctor Zhulik.

A mundane ultrasound? The emotional weight of diagnostic tests. 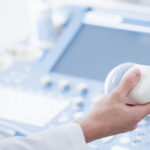