As student loan forgiveness awaits a decision from the Supreme Court, the Department of Education has launched a program that can forgive student loan debt for over 40,000 Americans and ease student debt burdens for up to 3.6 million borrowers. As this news circulates, what is less discussed is how student loan debt affects doctors and everyday citizens’ health – especially those who are underrepresented minorities.

Excessive student loans are a result of inequitable access to ideal social determinants of health (conditions where people are born, age, and experience life – socially, professionally, and recreationally – that impact overall health and quality-of-life) and systemic racism, which creates disproportionately higher amounts of student loan debt for underrepresented minorities in medicine.

Black medical students and physicians have higher student loan debt than white and non-Black counterparts. In a study from the Association of American Medical Colleges, 40.5 percent of Black matriculants had $25,000 or more in premedical education debt compared to only 18.7 percent of their white counterparts. Upon graduation from medical school, Black students also had higher median debt burdens: 91%  graduated with a median debt of $230,000 compared to 71 percent of white students with a median debt of $200,000.

The absorbent debt of soon-to-be physicians is deeply connected to health equity. With six figures in educational debt, lower-paying specialties such as primary care-family medicine, pediatrics, and general internal medicine may not be feasible for certain graduates. Because graduating medical students consider their educational debt as they advance their careers, student loan debt exacerbates the pre-existing physician shortage.

The Kaiser Family Foundation reports that 97.6 million Americans live in a designated primary care health professional shortage area (HPSA) disproportionately affecting certain areas of the country, such as the American South, the region with the highest percentage of Black Americans. As a result, Black patients in the southern region of the U.S. are greatly affected by medical student debt impact.

The health of Black patients and other underrepresented minority patients, along with their biases in medicine, matter. At the same time, physicians face racism, ableism, sexism, ageism, and their explicit and implicit biases. A recent study from the University of Virginia partially attributes disparities in pain management to bias. In this study, medical students and residents, not KKK members or Proud Boys, believe falsehoods such as Blacks have a higher pain tolerance because they have thicker skin than whites.

One would like to think that all patients receive compassionate and gold-standard care from physicians regardless of race, color, or creed. But as an expert in the medical field, I can confidently say that the possibility of no discrimination in health care is as likely as winning the Mega Millions Jackpot (a one in 302.6 million chance). Research shows that patients get better care from physicians who look like them, but higher debt burdens make this difficult for minority patients.

I no longer argue that racial disparities and racism exist – it would be like debating whether water is wet or Earth is round. Racism is real, with real consequences for real people.

But the seemingly insurmountable tasks of addressing racial wealth gaps and health care inequities have actionable items for progress. In the short term, enacting Biden’s student loan forgiveness plan would free tens of millions of borrowers of up to $20,000. If statistics and data hold, these borrowers will likely be underrepresented minorities.

Due to this country’s complex relationship with race, which we’ve yet to come to terms with, racism is so ingrained into society that it influences where one lives, is educated, and ultimately one’s career choices. For instance, relying on local property taxes, the largest source of local revenue for schools in the U.S., for public school funding worsens limited access to educational resources for low-income children who are also mostly underrepresented minorities.

Also, expanding the concept of no-loan colleges and universities offering free or reduced-cost tuition based on family income would encourage academically talented students from lower-income families to apply to competitive institutions with price tags that may otherwise be out of reach. Local and national policymakers already have the tools in their belts to do this.

Student loan forgiveness is important for students and graduates in all fields. And the idea of denying medical student loan forgiveness will mean fewer minority patient encounters with physicians who look like them or understand their experiences or their mental and physical pain. To address race-based discrepancies in health care outcomes, it’s time to address medical education costs and debt. The health of the nation depends on it. 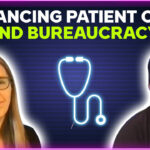