Dr. Dominic Corrigan appeared to have it all.

He’d wanted to be a doctor since he was young.

So he worked hard, got into med school, took out a loan and did what it took to realize his dream.

“I was high functioning, upwardly mobile, respected specialist leading a department, doing international research, sitting on charity boards and the PTA,” says Corrigan — a pseudonym for the founder of an international doctors-for-doctors support platform.

“But all was not well,” says Corrigan, who describes himself on his website as “a recovering psychiatrist who left medicine after burning out with concurrent depression and addiction.”

Imposter syndrome takes characteristics common to physicians and other high achievers — like perfectionism — and then throws a match on these personality traits. In the case of medicine, the culture and training amplify — even venerates — perfectionism. The drive to get it exactly right is, after all, what makes some physicians exceptional.

But at the end of the day, physicians are “human beings who happen to be healers,” says Corrigan.

This humbling realization only came to him when he hit rock bottom. Until then, he kept working in a traumatizing and toxic system that demanded inhuman feats of human beings.

“The really helpful things that get us into and through med school can also be double-edged swords,” he says. “I didn’t recognize the trauma that I was taking in — ironically because I was a specialist in mental health. Psychiatrists are the worst at looking after their own mental health. I was clever at hiding things, clever at putting on the mask on.”

Indeed, physicians are masterful at hiding. It’s part of the training.

Corrigan kept his pain under the mask of professionalism. In this way, what he developed in med school became the very barriers to getting help. No one knew the deep psychological pain he was in.

“Years of imposter syndrome had taught me to just smile and carry on. I was burned out, then I was depressed, and then I was addicted,” says Corrigan.

Corrigan began to have trouble getting out of bed in the morning, musculoskeletal pain and pulsatile tinnitus. He had a brain scan to rule out a tumor. “My scan found a brain, but no tumor. Much of my symptoms were unexplained medically.”

“I ate badly, neglecting my family and my health. I became very irritable with my family, started withdrawing from social events, and I found unhealthy coping mechanisms.”

What did he do?

“Because work was the problem, I just worked harder. I started even choosing to stay late charting or setting up research projects which were not strictly necessary. I ended up suicidal with plans and intent and some very dangerous medical knowledge,” Corrigan says, adding that this is why so many physicians and dentists are successful in their suicide attempts.

“I thank God that I’m here to carry on my life,” he says. “I was really lucky. I’ve had a long break. I’ve got therapy and meds. I’ve got a 12-step program. I found a higher power. I’m in a good place now. Just to be able to have this conversation — who knows? Maybe just one person can be helped in some way.”

Corrigan and his non-profit offer doctors the anonymity he found in 12-step programs that was so freeing. Offering safe haven for physicians to “come out of the closet” with their mental health challenges is what it is all about. While systemic changes must happen, says Corrigan, physicians need help now. It’s not an either/or formula of recovery. It’s both. Changing the system could take years. In the meantime, physician mental health is paramount to the medical system working at all.

This is how healers become human again.

A national strategy on hunger, nutrition, and health [PODCAST] 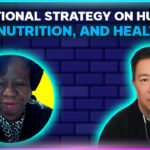 Stories of an ambulance medic in Israel