For diabetics, insulin matters as much as H2O. Unfortunately, insulin’s a hell of a lot more expensive than bottled water. High insulin prices force approximately nine million Americans to balance their wallet and well-being.

The American Action Forum reported that a type-one diabetic’s average yearly expense for insulin was $~6000 (i.e., $500/month). It’s easy to lambast Big Pharma companies for the current state of insulin’s affairs, but history and market behavior gives a bit of critical nuance. Diabetes used to be a death sentence, with only diet changes being the main tools to fight the disease over a hundred years ago. However, nutrition is a blunt instrument to blood sugar, as interest rates are to inflation and the economy. Not to mention that several patients find it difficult to adopt major lifestyle changes. In 1922, a team of doctors and biochemists produced the earliest version of lab-drawn insulin alongside Eli Lilly and the University of Toronto.

Now, that drug’s genetically modified and versatile for several diabetic issues. Today we have three major pharma companies (Eli Lilly, Novo Nordisk, and Sanofi) manufacturing various forms of what might be considered a scientific miracle. That oligopoly is part of why insulin commands a massive price. But there’s more to the insulin market than Big Pharma alone. 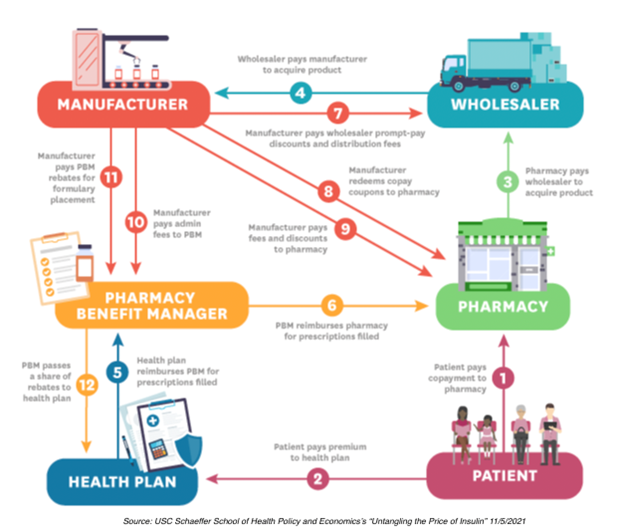 Insulin keeps getting expensive partly because more people are getting diagnosed with diabetes every year — which pushes up overall demand. The other factors behind rising prices stem from that market’s several players: manufacturers, wholesalers, pharmacies, pharmacy benefit managers (PBMs), health plans, and, of course, patients. Manufacturers give the drug to wholesalers, usually at a bulk discount, while paying out rebates to PBMs for higher formulary placement.

Wholesalers are the majority of insulin makers’ revenues due to pressure from PBMs. Pharmacies pay wholesalers for the product and bill health plans for reimbursement. Patients then get their insulin from the pharmacy with insurance, cash, or drug assistance programs.

Health plans cover the meds (or not) and reimburse PBMs for services. PBMs take rebates from manufacturers to, in principle, bring the overall insulin cost down. In practice, that step isn’t so clear. With the number of entities involved and the secrecy of coverage negotiations, the actual sticker price listed by insulin makers isn’t what patients pay. That being said, the list price is still a proxy for price behavior up and down most of the insulin supply chain. 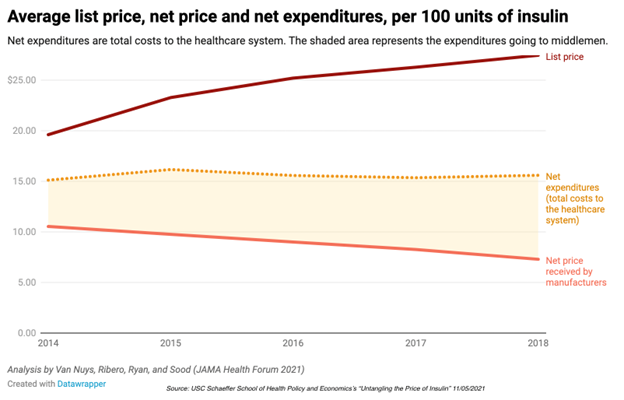 Between 2014 and 2018, the average list price per 100 units of insulin rose, yet the net price (where manufacturers draw their sales from) fell. The real story is how the net cost to the insulin health care system stayed flat. Manufacturers are taking discounts, yet both health plans and pharmacy benefit managers aren’t passing those savings along to patients. Such behavior is why the middlemen’s share of insulin expenses went from 30 percent in 2014 to 53 percent by 2018. The middlemen supposedly negotiating prices down maintain their profits by keeping the savings, while drug makers want to keep their margins as well. List prices rise to compensate. The cycle continues.

Lawmakers have started to act on this phenomenon. Both states and the feds have been applying copay caps, meaning that a patient’s monthly expense for insulin would have a ceiling regardless of a health plan’s deductible. As part of the Inflation Reduction Act, Congress passed a bill limiting monthly insulin copays to $35 a month for Medicare patients. Colorado broke ground with an insulin cap in January 2020. 13 states enacted their own rules by June 2021. State-based caps mostly target patients with commercial insurance. Yet those most in need of cheaper insulin are Medicaid and uninsured patients. Neither are beneficiaries of most copay cap laws. The state-level caps do not apply to all commercial insurance plans to begin with. It’s mostly single-state health plans that have to abide by cost limits. Patients who get insurance through an employer with multi-state coverage may not qualify for insulin assistance.

While it’s a little early to gauge the price caps’ impact, such rules potentially set a precedent for less diabetes research in the future. Insulin manufacturers would likely need to accept more rebate concessions while raising list prices to compensate for potential margin declines. Eventually, the usage of insulin for the average consumer becomes untenable.

The diabetics of tomorrow, and there will be plenty, would suffer. Patients signing up for insurance now should request summaries of benefits and coverage documents as well as published insurer formularies to seek the best possible insulin coverage. Contacting a local plan broker and insurance marketplace is a more reasonable first step than waiting for lawmakers to concoct smarter insulin coverage.

Rushi Nagalla is co-founder of a dermatology practice.

Bulletproof backpacks: There’s more we can do [PODCAST] 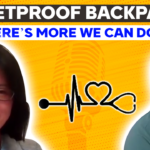