Health care is growing hard to come by in rural America.

Three-quarters of rural counties suffer from doctor shortages. More than 200 rural hospitals are at risk of closing due to financial hardship within the next two to three years, according to a study published this spring. And while 20% of the U.S. population lives in a rural region, just 10% of physicians practice in these communities.

Fortunately, there’s a group of doctors uniquely suited to fill these gaps — graduates of international medical schools. These physicians have a history of working in our country’s neediest communities. Many of them are U.S. citizens who simply chose to go abroad for their education.

COVID-19 took advantage of rural America’s shortage of care. Patients in rural areas were 54% more likely than others to contract the virus, according to a September 2021 analysis from the Rural Policy Research Institute. Tragically, those infected people were twice as likely to die than their urban counterparts.

Lower vaccine rates in rural areas certainly contributed to those disparities. But so did staffing shortages and limited access to care, the analysis found.

Boosting numbers of primary care physicians in shortage areas could save over 7,000 lives every single year, according to a March 2021 study published in the Annals of Internal Medicine.

That’s easier said than done. The United States is predicted to face a nationwide shortage of up to 48,000 primary care physicians over the next decade.

One of the key drivers of these shortages is our aging physician workforce. Approximately 40% of doctors will reach retirement age over the next ten years. Rural doctors are even older. About half were at least 50 years of age as of 2017.

There are three key ways to combat the coming wave of retirements and strengthen the pipeline of rural doctors.

First, we can increase the number of rural Americans who pursue careers in medicine. Students from rural communities accounted for just 4.3% of new medical students in 2017. That’s the result of a 15-year decline. The share of rural medical students dropped by a staggering 30% between 2002 and 2017, according to research published in 2019 in Health Affairs.

Medical graduates from rural communities are far more likely to practice in places like their hometowns than those from more populated areas.

In other words, rural students are our best bet for narrowing the rural doctor shortage.

The second is to look beyond U.S. borders — to international medical schools — for the next generation of rural physicians.

International medical graduates, or IMGs, account for about 25% of physicians currently practicing in the United States. The share is even higher in particularly needy communities. In low-income areas, many of which are rural, more than 42% of doctors are international grads. IMGs are also more likely to “look after underserved populations” and “work in rural areas,” according to a 2019 analysis published in BMC Family Practice, a medical journal.

The international medical school I lead has actually been the U.S. health care system’s top source of new doctors over the last eight years. Many of our graduates practice in rural and other medically underserved areas.

The third is to expand residency training opportunities in rural America. Where physicians complete their residencies plays a big role in where they ultimately practice. One analysis found that over half of family physicians go on to practice within 100 miles of where they do their residency. Nearly 60% remain in the same state.

Historically, most residency programs have been concentrated in urban areas near big hospital systems and universities. Funding more rural residencies could increase the flow of doctors to these needy communities.

Fortunately, some lawmakers are considering just that. More than a dozen have gotten behind legislation that would permanently authorize the Teaching Health Center Graduate Medical Education program, which supports residencies at rural health clinics. The program has already helped send hundreds of new doctors to underserved communities.

Congress is also working to increase the number of residencies funded by Medicare. Last December, lawmakers included funding for 1,000 new slots in a multi-trillion-dollar spending package.

The lack of access to care in rural America has devastating consequences — as the last two years have revealed all too well. International medical graduates can help fix this problem — and make America a healthier place.

Why have we let our diseased health care system go untreated? 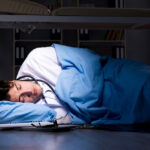