When I was in high school, I read George Orwell’s 1984, a novel about a dystopian future where the government (a.k.a. Big Brother) monitors everything the citizenry says or thinks. Anyone deviating from government “doublespeak” is swiftly and severely punished. I recall my horror as the main character, Winston, a former government official who joins the anti-Big Brother underground, is arrested by the “thought police.” His mind is then reprogrammed into “right thinking” in a terrifying scene worthy of any horror movie. Now, California’s Assembly Bill 2098, signed into law by Governor Gavin Newsom, aims to punish physicians who interpret scientific facts differently from state or federal health care officials.

This bill allows the California state medical board to censure doctors who share COVID-19 views that are “contradicted by contemporary scientific consensus” and delivered with “malicious intent or an intent to mislead.” Who will decide whether a physician intends to “mislead” or is expressing their analysis of the data? Will government officials urge patients to report contrarian doctors to the “thought police?” Perhaps California plans to monitor patient-doctor conversations by bugging exam rooms. It makes me think about the plight of Ignaz Semmelweiss, the 19th-century “father of infection control,” who lost his career and died in a public insane asylum because his colleagues were outraged by his claim that handwashing could prevent infection.

As a former pharmaceutical advertising writer, I helped these companies spread medical misinformation.

My job was to spin their “pharma facts” into compelling stories to sell drugs. As a result, drug, device, and diagnostic companies dominate our medical information ecosystem with an organized and coordinated flow of misinformation into conferences, scientific journals, clinical guidelines, and TV ads for prescription medications.

Life sciences companies spend $30 billion yearly promoting their version of science. Science and marketing communicators like myself are employed by medical ad agencies, PR firms, and medical communication companies that ghostwrite journal articles and develop pharma-favorable CME programs. Drug and device companies twist selective scientific data into compelling “doublespeak” to persuade clinicians to use their products. The most notorious example is the case of” Purdue Frederick (now Purdue Pharma), claiming that Oxycontin was non-addictive based on no evidence.

American television audiences are subject to a constant stream of prescription drug ads spouting scientific half-truths and lies of omission. For example, you can listen to commercials where drug companies claim superiority for expensive stroke medications based on non-inferiority trial designs. Likewise, ads for cancer drugs talk about progression-free survival but fail to disclose that the medications fail to increase the patient’s overall survival. Meanwhile, ads for diabetes drugs urge patients to achieve a hemoglobin A1c (HbA1c) less than 7 percent, even though intensive glucose control and hypoglycemia contribute to 100,000 ER visits and 30,000 hospitalizations annually. And let us not ignore those prescription drugs that killed hundreds of thousands of Americans: Vioxx, Tambocor, and prescription opioids.

It saddens me that we allow industry medical misinformation to harm patients but pass legislation threatening individual doctors’ speech. Before we condemn COVID-19 contrarians, let’s address the lies and half-truths baked into life sciences marketing. Why allow drug, device, and diagnostic companies to manipulate scientific evidence while punishing medical experts who wish to engage in the scientific debate about the evidence behind health care policies such as masking, boosters for teens, or school closings? I fear the answer lies in an American health care system dominated by industry instead of medical experts.

Lydia Green is a pharmacist.

So what if cry with my patients? 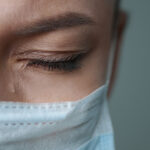