It was fall. Sun-slanted rays filtered into the church from a cold November sky, creating a false sense of warmth. My nephew Dru stood before family and friends who were gathered to remember his mother. He began by telling how, in-between trips to the emergency room, oncologist, radiologist, and myriad other health care providers, he would find himself preoccupied with her eulogy. He worried he would not be able to find the perfect words to encompass everything she had meant to him. He wanted to be ready for this day.

Dru’s story was meaningful. And for most, it elicited feelings of empathy and compassion. To me, his words felt like a swift blow to the back of the head, the type of blow provoked by a heavy bag of bricks. In one quick moment, there was an abrupt realization; I, unlike Dru, was not ready for this day because I never made it past her last breath. During the last eight months of her life, in between those same trips to the emergency room, oncologist, radiologist, and myriad other health care providers, there was never any contemplation, consideration, or planning of any sort of eulogy.

My one and only goal during this time was to make sure she wouldn’t be alone when she died.

This is where my story begins.

But before I begin, did you know I have been a nurse for over 25 years?

Did you know I specialize in taking care of patients with head and neck cancer? Did you know during the course of her 19-year struggle with breast cancer, during remissions and reoccurrences, through the ebb and flow of this insidious disease, while I was caring for hundreds of patients undergoing treatment for cancer, I was excluded from caring for her? Oh, and lastly, did you know this woman was also my sister?

From the moment of her diagnosis to the moment she begrudged her last breath, my sister cocooned herself in an impermeable blanket of denial. The breadth of the blanket was reserved for her and for those individuals who possessed the grace to align with her thinking and treatment choices. Sometimes, the blanket was black; sometimes, it was white. There was never any room for the color gray. “I am not going to die from this.” She pointed at me, curling her finger in and out, reeling me in hook, line, and sinker. “This is how it works, Mag — you never say the word ‘cancer”‘because if you do, you give it the power to destroy. Anyone who thinks otherwise is out. I can only be surrounded by positive people.”

Oh, how I fought and struggled with her blanket! I would pull up a corner, searching for solace and warmth underneath its cover. But as my sister’s body betrayed her thoughts, the blanket became an overwhelming, overpowering, and suffocating force to be reckoned with. It grew fatiguing to be in the constant dark shadow of its cloak.

I wish I could tell you that the last night of my sister’s life was filled with peace, and she quietly slipped away. Unfortunately, this was not the case. Despite the truth that death is as natural as being born, her self-preservation eluded her into thinking it would never happen to her. There was no official will, last testament, or opportunity for closure with anyone who mattered most. With the wave of her wand, palliative care and hospice — the experts in compassionate death care and peaceful passages — vanished in a puff of smoke. There was only my sister, lying despondent in a hospital bed. Despite the enormous angst provoked by the way she chose to manage her disease, despite everything, I realized my only role as a sister was to be her sister.

I didn’t realize it at the time, but it was by far the most difficult and most important moment in my life. Being present during her last moments on earth was a gift, and I wouldn’t have missed this dance for anything.

Each breath was a battle, and as her chest laboriously heaved in and out, blood, slow and steady, trickled through the packing in her nose, gently dropping onto her lip. In a brief instant, between a gasp of breath and trickle of blood, the once impenetrable blanket of denial, the source of unwavering shelter, quickly and unsympathetically abandoned her. It spinelessly disintegrated into a pile of wet tissues scattered around the bed.

The time of denying, living from a place of fear by negating the reality of the situation, had ended. The naked truth was irrefutable; my sister died from “cancer.” I had never seen her as vulnerable as she was at this moment. In the still small space at the end of all of her days, from a place of deepest compassion, I instinctively placed her hand in mine and draped my body across her lap.

My postpartum depression was a stumble, but am I really past the trauma?

How to improve decision-making effectiveness 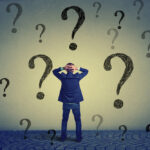