When I was a child, I recall my mother telling me that to live a successful life, you must do one thing every day that scares you. I remember not fully understanding this piece of advice’s magnitude or real significance, yet it still resonated. It’s funny, what stands out to us, what we remember, and why. Little did I know at the time that these words represented the very premise of the clinical work I do as an adult and how much it would change my patients’ lives, and mine for that matter. Choosing to do the scary things has never failed me, nor anyone I’ve ever worked with, and I am thus a huge advocate for venturing into fear.

I am a clinical psychologist specializing in obsessive-compulsive disorder. OCD is an often debilitating psychiatric disorder that consists of two main parts: obsessions, which are intrusive, unwanted thoughts, urges, or images that cause distress, and compulsions, the actions, often repetitive ones, that one engages in to alleviate the anxiety caused by the obsessions. For example, an individual with the contamination subtype of OCD might have intrusive thoughts (obsessions) that they have germs on them or could contract an illness if they touch a surface they perceive as contaminated. As a result, said individual may wash their hands or body excessively (compulsions) so as to feel clean and ease their anxiety about contracting illness. Obsessions and compulsions, in whatever form they may present, can interfere significantly with social or occupational functioning and overall quality of life.

Currently, the most effective treatment for OCD is a cognitive behavioral therapy called exposure and response prevention therapy (ERP). ERP consists of exposing people to what they fear and avoid, in a graded manner, so that they can discover that they can cope with the unknown better than they may have thought without escaping the feared situation. They also learn the difference between real and imagined threats or dangers. Or the way I like to put it, they learn what they’re made of. This is such an inspiring process to witness and be a part of because, in the context of OCD or life in general, so many of us underestimate what we’re made of, and we’re too afraid to push our limits to find out.

The best things I’ve ever done in my life have been the scariest. They’ve entailed a ton of uncertainty. For example, I was the last person people ever thought would move to a different country to pursue a doctoral degree. I was a homebody, close to my family and friends. I clung to the comforts and stability of home and tended to never veer too far from what felt safe. One day, I took a leap of faith, not knowing if I’d hack it or fail miserably, and today, the only uncertainty I can’t imagine living with is that of not knowing if I were capable. Over a decade later, I’ve opened a clinic where I get to watch others take their own leaps into the unknown toward the lives they dream of. Every day in my office, I see the strongest, most courageous part of the human spirit that I truly believe exists within all of us. My patients only reinforce my initial decision and serve as inspirational reminders that the lives we dream of lie beyond what we fear. They serve as reminders that embracing the unknown is the key ingredient in growth, and thus, the key ingredient of the realized dream, whether that means overcoming an anxiety disorder, starting a business, running a marathon, or writing a New York Times best seller.

While my mother can’t pinpoint exactly where she first heard this piece of advice, likely from my grandfather, the direct quote is attributed to Mary Schmich, a columnist for the Chicago Tribune. Some version of it has been attributed to a number of notable writers or historical figures such as Eleanor Roosevelt, Helen Keller, and Ralph Waldo Emerson, who rose to have great influence in their life and time. This makes sense, as I would venture to say that anyone who has ever made a significant change in this world felt fear or some level of uncertainty at first – the only difference between them and others is that they never let it stop them.

Lori Merling is a licensed clinical psychologist and founding clinical director, The Sydney Merling Center for OCD and Anxiety at Telstone IOP, where she treats OCD, OC-spectrum, and anxiety disorders. She can also be reached on Facebook and Instagram.

A C-section is not a defeat 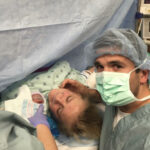 Stop and smell the cadavers