Back in the 1980s, I had a longtime patient, age about 30, that came to my office for severe back pain. She previously had some mild back pain and had no orthopedic evaluation. Otherwise, she was in good health without any other health issues.

She could barely walk upright, so I sent her to the orthopedic physician I normally referred my patients to the same day. He sent her back to my office two hours later, had done an exam without obvious serious medical problems, and had refused to prescribe narcotic pain medicine. Now she is in more pain and extremely angry at him and at me for referring her there.

I discovered that he was strongly against using narcotic-type meds to treat serious pain for his own reasons, which I was never made aware of. I prescribed the narcotic pain medicine so she could get home and a few days to let the pain subside. She never has any signs of narcotic addiction nor a history of that.

I was disappointed in the orthopedic physician and his lack of sympathy for the patient. I knew that I would never send him another patient. I thought he had become so fearful of inciting addiction or being accused of contributing to any patient’s addiction that he was willing to compromise his pain treatment to prevent his fears.

In the mid-1980s, California passed a law requiring all pharmacies to track the narcotic prescriptions they filled and the physician name who prescribed them. They were required to report any levels of prescriptions, dosage, and frequency prescribed that suggested a physician was supplementing the addiction of patients. There were reports of some narcotic agency raids on doctor’s offices and physician punishments.

It involved rare physicians but has compromised a large area of medical care since then.

My concern has always been about practicing medicine in a way that reduced the patient’s pain significantly for a short time, which enabled my patients to recover from major surgical procedures almost pain-free, as well as reduce pain by providing time to be seen by a consultant and treated.

I researched the medical literature on addiction and discovered things about narcotic addiction that we are never taught and only learn about later in medical practice. I would venture to say that the following information about narcotic addiction should be used to the full extent in medical practice by physicians to relieve pain in patients safely, legally, and properly. Unfortunately, many practicing physicians have never been made aware of these issues, it seems to me.

When physicians are knowledgeable about this topic, I think it would alleviate the pain we treat almost daily in a manner that will enable an enormous number of patients with significant pain, chronic pain, and recurrent pain to tolerate their pain and live relatively normal lives—patients that today are frequently being denied “good enough” pain medication because of threats to physicians, fears of physicians, and ignorance of physicians regarding narcotic prescribing.

Physiological addiction is the acceptable amount of specific narcotic medication when stopped or withdrawn, rarely involves any withdrawal symptoms or consequences. This is the status of patients one finds in the treatment of pain centers across our nation. Most any physician can treat these patients if they choose.

Patients in this category often have undiagnosed, assigned diagnoses or unproven diagnoses as the cause of the pain. These patients are commonly considered to be medical patients that often are considered junkies, already predisposed to psychological narcotic addiction if they aren’t already addicts and become labeled as narcotic addicts by physicians without documenting the narcotic addiction—and go untreated and rejected.

When treated with narcotics for chronic pain or psychological addiction, medical patients are controlled, watched carefully, and rarely prone to abusive, destructive, and “psychological aberrations” and behavior.

Patients in continuous pain can recognize that pain relief is the objective of the narcotic medication—quite different from patients with psychological narcotic addiction, much of which is still not understood.

We all know a few things about psychological addiction, and we as physicians leave the treatment to those who manage “withdrawal” or “detox centers.” Psychologists, psychiatrists, other physicians, and various other trained people manage the treatment.

Signs of this type of addiction are usually evident, either with obvious skin signs of repeated needle marks, dilated pupils, or behavior antics such as the unbelievable number of tactics used to explain the need for more frequent refills of the drugs.

Physicians are placed in a legally vulnerable position when being confronted by medical patients in increasing numbers. Rather than take a chance of being accused of inciting narcotic addiction, treating narcotic addicts unknowingly, being addicted to narcotics themselves, or over-prescribing narcotic medications which threaten the loss of their medical license and their medical careers, an increasing number of physicians refuse to treat any medical patient, even for pain that is expected after a trauma or a surgical procedure—depending on their own risk tolerance.

Unfortunately, many medical pain patients are treated like narcotic addicts far more often than necessary and for reasons that have nothing to do with narcotic psychological addiction. The tragedy is increasing in our nation, and physicians are neglecting far more patients in pain.

Pain is caused by physical pathology more often than psychological issues. Look at the increasing number of “pain clinics” across our nation that are packed with patients in pain who are not psychologically addicted.

That would suggest the pain-treatment physicians are quite knowledgeable about narcotic-type addictions and treatment, and other physicians aren’t.

This lack of knowledge by other physicians about narcotic addiction is also causing significant destruction of trust, reliance, and rapport between physicians and patients, spreading to physicians who treat patients with pain properly.

Curtis G. Graham is a physician.

Your anesthesiologist cares for you [PODCAST] 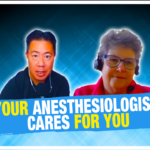 The impact of a lack of diagnosis reaches far and wide

Back to reality when it comes to pain treatment
7 comments