Patients with myalgic encephalomyelitis (ME) and their allies will rally in DC, London, and Edinburgh this September to “demand bold, urgent governmental action” for the millions of people living with ME, long COVID, and other infection-associated, chronic diseases.

As researchers continue to find many similarities between ME and long COVID, the history of ME offers crucial lessons for approaching long COVID and some pathways toward more effective research and care.

The primary symptoms of ME—post-exertional malaise, unrelenting fatigue, and cognitive dysfunction—also appear in many long COVID cases. In fact, preliminary studies estimate nearly half of long COVID patients meet the diagnostic criteria for ME.

Also known as ME/CFS or chronic fatigue syndrome, ME drew the Centers for Disease Control’s attention almost 40 years ago, when it was identified as a “chronic, mononucleosis-like illness” with persistent viral activity.

As more cases emerged, however, some influential scientists attributed patients’ symptoms to “dysfunctional illness beliefs.” In the following decades, the funding for ME research went largely toward psychological treatments for a physiological illness.

Studies have since found that ME patients were frequently mistreated or misdiagnosed, and often misbelieved.

I am one of those patients. Despite my professional expertise in medical rhetoric, I spent a decade shuffling between clinicians who attributed my symptoms to stress. They insisted I stop worrying and resume my usual activities.

As my symptoms escalated, I experienced flares of acute inflammation that sent me to the emergency room three times in a matter of months. I went from daily physical activity—including weightlifting competitions and jiujitsu tournaments—to sometimes feeling so weak that I could not speak. I did not yet know that exertion can exacerbate ME, and I had continuously pushed myself into worse states of debility.

Those models enabled public health officials to de-prioritize a condition that leaves 385,000 U.S. Americans homebound—and that now has an estimated economic impact of $149 to $362 billion.

In 1999, Congress found that the CDC misdirected $12.9 million—over half the funds dedicated to ME research—to addressing other conditions. Recent research finds that ME remains the “most underfunded disease” in the National Institutes of Health, receiving only 7.3 percent of the expected resources relative to its disease burden.

The largest study on ME to date, known as the PACE trial that began recruiting patients in 2005 and was completed in 2010, established a misleading narrative of ME as a psychological disorder—one that PACE investigators claimed could be treated by cognitive behavioral therapy and graded exercise therapy. Many researchers and advocacy groups spent the last decade contesting the flawed methods of the study.

PACE investigators used overbroad definitions for ME that likely included many participants without ME altogether. They changed their outcomes mid-trial so that it was possible for patients to count as “recovered” while leaving the trial with a less functionality than when they entered.

The trial’s main investigators also had financial and consulting relationships with disability insurance companies and had advised companies that “rehabilitative therapies like those tested in PACE could help ME/CFS claimants get off benefits and back to work.”

While it is possible for psychological conditions to cause physiological symptoms, other studies found that PACE’s recommended treatments not only failed to improve symptoms of ME, but even harmed patients. In many cases, applications of CBT and GET have worsened patients’ conditions.

The CDC stopped recommending CBT and GET for treating ME in 2017, and the U.K.’s National Institute for Health and Care Excellence followed suit in 2021.

But since then, PACE investigators have begun positioning themselves as experts in long COVID, insisting on the need to further fund CBT research. Other studies have also revived arguments about patients’ “illness beliefs” as the root of their symptoms. They join some other psychologists and physicians pushing to categorize long COVID as psychological disorder—despite consistent evidence of its physiological basis.

To be clear: Therapy might be a helpful tool for some patients with chronic illness, but it cannot be the sole method of addressing pathological and physiological abnormalities.

The belief that patients just need to change their mindset has trivialized many people’s suffering and deprived them of life-sustaining resources. Faced with this public skepticism, long COVID patients are often denied insurance coverage and disability benefits.

Opportunists have taken advantage of patients’ despair by offering psychological interventions that not only worsen symptoms in a majority of patients, but have also caused tremendous psychological distress, feelings of self-blame, and even attempted suicides.

Many have called much of the past three years “unprecedented,” but ME provides critical precedents for approaching long COVID. Responses to long COVID should draw from and build on relevant clinical findings from ME research.

The history of the PACE trial cautions against recommending exercise for those with post-exertional malaise. It also shows the necessity of pursuing standardized and accurate disease definitions.

Finally, if ME patients and researchers have a voice in governmental responses to long COVID, investigators of both conditions can build from one another’s findings and provide faster relief to millions of patients worldwide.

V. Jo Hsu is an assistant professor of rhetoric and writing.

Focus on the rheumatoid arthritis patient, not on their disease

How to stay off my operating table [PODCAST] 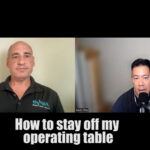 Why psychological explanations for long COVID are dangerous
2 comments