“Have you ever had feelings of depression?”

I regretted asking that question the moment it slipped out of my mouth. In the span of what felt like 5 minutes but was probably 30 seconds, both the patient and I immediately became awkward. The patient hesitated and her breathing hitched. My heart rate became rapid and my palms got sweaty. Her eyes turned red, her face tilted downwards, her fingers tremored. By the end of those 30 seconds, I really regretted asking her.

That question was on my list of things to ask because she had mentioned feeling depressed at the last appointment. I hadn’t asked it before because I thought the translator simply used that word to describe how she felt about her back pain which was her chief complaint. But before I could take it back, the words had already left, and the impact had already been made.

She began to silently cry, and I immediately walked toward her, but I didn’t know what to say because my Spanish was limited to “hola” and “gracias.”

A plethora of emotions took over me at that moment: worry about her situation, anger at myself for my lack of Spanish knowledge, fear of asking that question again. After the encounter, my attending told me that difficult questions are OK to ask, especially if they can help us better treat the patient. But why did it feel like I failed my patient?

This is often the feeling I have when there is a language barrier. It is this feeling of hopelessness and like there is always something missing in our relationship. However, it’s something that we can’t avoid or completely fix. So, I did whatever was in my power at that moment which was to stand by her and get her a cup of water after she settled down a bit.

In this profession, many of our patients will have issues that we cannot fix. We will continue to feel upset, hopeless, and suffer when our patients struggle. These emotions are okay to have because they help us to be empathetic and kind caregivers.

Should we really ever feel comfortable in a room where we discuss topics like depression, miscarriage, or abuse with our patients?

I hope that even five years from now, I still feel a bit awkward or nervous when I have these conversations. It will become a reminder of how medicine is a difficult field but also equally rewarding when you are able to provide some relief. When I walked out of clinic that night, I was still a bit upset. It was already difficult to communicate with my patient, let alone make her feel better. This feeling, though, also made me more eager to improve. Not just improving my Spanish, of course, but also becoming stronger for my patients so that I can be their support when they need me to.

Aatqa Memon is a medical student.

Virtual care is convenient, but is it better for everyone?

Me is who I am 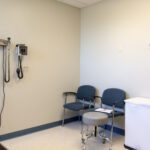