The fertility rate in the United States, and globally, has been on a steady decline. This is the sixth consecutive year that there has been a reduction in the fertility rate, which has decreased by an average of 2 percent. Numerous factors contribute to the global decline in fertility, such as economic instability, increased educational attainment among women, delaying marriage, and the decrease in births in women under 34. Further compounding the issue on male and female fertility is that of pollution. As a result of the pollutants in the air, biochemical changes are occurring in the human reproductive systems. The air pollutants found in our bodies result from the water we drink, the food we eat, the air we breathe, and even the things we touch.

Pollution is essentially defined as any unfavorable alteration to our environment, largely due to human actions, through the effects of the changes in the energy pattern, radiation levels, chemical and physical constitution, and the abundance of organisms. Transportation and byproducts of industry are large contributors to air pollution worldwide. Emissions from factories and industrial byproducts, airplanes, traffic jams, delivery trucks, and every other means of transportation result in air pollution that is creating the potential to negatively impact our fertility. This issue negatively impacts people of color, who are more likely to live in areas of higher concentrations of environmental pollutants. Environmental racism is an important consideration when discussing the effects of air pollution, as our environment plays a significant role in the social determinants of health.

The primary means by which these pollutants affect fertility are through epigenetics, oxidative stressors, and endocrine disruptors. Epigenetic changes are the alterations to genetic expression within an organism that can be caused by external factors, which occur through histone modifications as well as changes in DNA methylation, directly affecting sperm production. Oxidative stress can have a similar effect and is caused by the generation of reactive oxygen species that modify DNA, proteins, and membrane lipids, which are essential to both male and female gametogenesis. Additionally, endocrine disruptors are chemical compounds that can interfere with an organism’s hormone levels, and in turn their fertility, through mimicking or inhibiting certain hormonal functions. These effects are largely accumulative, which is important when considering that air pollution is not the only source of endocrine disruptors, we are exposed to them through the products we use that contain things such as phthalates and Bisphenol A, which are plastic byproducts, in addition to dioxins and triclosan, which can be found in cosmetics.

This may seem pretty ominous, but there is hope. We can do many things to mitigate the effects of air pollution, both on a grand scale and a more individual level. However, these actions aren’t enough. As much as we would like to do our part in reducing harmful emissions, individuals aren’t responsible for the global reduction of pollution as a whole. According to the most recent Carbon Majors Report, the majority of these emissions are still being produced by large corporations. This means that until there are serious sanctions on how corporations operate and the emissions they produce, we will continue to be exposed to these harmful chemicals. We can only do so much to mitigate our exposure to air pollution; policymakers worldwide need to step up and protect their citizens and the environment.

Despite not being primary contributors to the air pollution crisis, there are ways that we as individuals can reduce our impact on harmful emissions. Recycling, composting, reducing waste, reducing single-use plastics, and incorporating cleaner methods of transportation, such as carpooling or using public transit are all things that we can do to reduce our environmental impact and reduce air pollution emissions. We can also limit the burning of fossil fuels, promote more sustainable energy sources, and limit our direct exposure to smoke to reduce exposure to these harmful emissions. Another interesting mitigation strategy is increasing the concentration of vegetation in areas of high concentration of air pollution, which is seen in many urban planning models around the world but can also be done at the individual and community levels. We have the power to make a change on an individual level and make choices that can benefit both the planet and ourselves, all it takes is choosing to take the first step.

How to cope with pandemic fatigue

Why we should celebrate the Great Resignation [PODCAST] 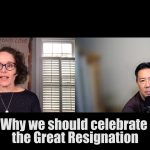