I am a first-generation, working female in my family. My mom was your typical 70s woman that stayed home with her kids and didn’t have, or even want, a career. Or so she said. The laws surrounding job discrimination and sex-based wage disparity of the mid and late 60s were still very fresh and, in many ways, working moms at that time, were not always held in the highest regard. Taking your child to daycare or a sitter so you could work, was stigmatized, even in situations where the woman didn’t have much of a choice financially. And if you did have a choice, and you chose to pursue a career as a mother, that was brave. The culture in our country had a lot of work to do in valuing women in the workplace much less celebrating them.

As a young female, the working women role models that I had were mainly on TV. Even though I watched a lot of The Brady Bunch, Partridge Family, and others without many examples of working women, I paid attention to others like Mary Tyler Moore, One Day at A Time, and later, the greatness of Murphy Brown, Designing Women and Ally McBeal. I remember imagining myself in those careers and lives. It seemed exciting, fulfilling, challenging and equal. What a great time to be alive. Unlike my mom and those before her, I had some choices. And to all the warriors that gave so much for the Women’s Suffrage Movement, I am beyond thankful for that.

Fast forward, and I found myself pursuing a career initially in health care equipment sales and later health care staffing. Both were mostly male-dominated fields, mainly because they required overnight business travel. Far more men than women with families, held those positions for that reason. The stigma was still alive and well as it pertained to parenting roles, but as the 2000s emerged, that started to change along with other discrimination and equality issues. Not to say that the glass ceiling is gone, or all signs of discrimination are over, but things have improved immensely. Most recently, however, the pandemic has caused a setback for working women by widening workforce disparity with greater job losses among women than men. This was reported as having largely to do with the collapse of childcare as well as cutbacks in school hours and child supervision. So, while equality in the workplace continues to evolve, many would argue that equality in the home hasn’t always kept up.

As we approach Women’s History Month, we are about to be inundated with corporate ads and award announcements highlighting Women in business and industry that have achieved some truly amazing things. These accomplishments deserve recognition and celebration as many of them have made tremendous sacrifices and have inspired many in their fields of work. But to even make mention of their sex in the same context as their business accomplishments, somehow lessens the accolades. Unless their accomplishment has something specifically to do with their sex, why is it even mentioned, much less highlighted, as a reason for their recognition? In the workplace, where we are focused on equality, isn’t highlighting someone’s sex counterintuitive and even slightly offensive? And without making this political, no one wants to have a reason for their professional success or failure to have anything to do with their sex or any other physical characteristic. As an example, what if individual companies had annual awards for Female Salesperson of the year or Top Male Accountant. Ignoring the fact that it would be an HR nightmare, imagine winning that award for a moment. Would you wonder why your sex was even a requirement for this recognition? Would you wonder if certain sexes are somehow disadvantaged in that field, thus the carve-out? Maybe it’s just me but I would much rather be passed over for a business award that is inclusive and equal to all based on workplace requirements, than to be given an award that was specifically designed to give me an advantage based on something totally random. That’s pandering.

As we reflect on Women’s History Month, let’s be thankful for our progress and focus on the historical and cultural contributions. Let’s celebrate those that gave their time, energy, and even their lives to make sure that our half of the population, could someday be equal to the other half. Let’s continue the work and concentrate on more equality, opportunity and inclusion, and less division.

Family medicine and the fight for the soul of health care 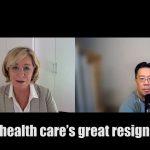