I’ve had doctors listen to my heart many times in my life. Recent work I did in Pakistan as an anthropologist let me listen to theirs.

A few months ago, I embarked on an ethnographic study to understand what health care professionals saw as the psychosocial needs of pediatric patients. This involved conversations with several doctors in Pakistan, who had volunteered to share their views about pediatric patient care. As I engaged in deep, organic discussions with my interlocutors, I found doctors willing to explore personal experiences which had left indelible memories. I had somehow tapped into a need for them to reflect on their own struggles to gain trust, counsel, and understand patients psychologically and the impact this had on them. An unexpected by-product of my research was that I had created a safe space for doctors to unpack their emotions. While they appear clinical and detached, doctors have a heartbeat that races when they share personally meaningful stories about their work in rare places where they feel completely comfortable.

I learned that doctors had a common need to talk about their work. Encouraged by the ethic of confidentiality and anonymity promised by my study, they welcomed a cathartic opportunity to open up and share unfiltered feelings about their own personal journeys while working with pediatric patients. As the bonds of formality between us became subtly looser, we were able to engage in discussions much deeper than I had expected. Once the restraint of professionalism had been penetrated, I seemed to touch a perceptible sensitivity. Emotions, brimming within, spilled out so easily. One doctor described his desperation when he could not perform dialysis for a girl who was so terrified that it made the procedure impossible. It was a question of saving her life, so he even reached out to a psychiatrist for help. He invested his personal efforts at many levels to help the child overcome her fear. The extent of his involvement and ultimate success made the case unforgettable for him. Even as we talked about it, I found him moved to tears, a grown man whom I had never even met before.

My realization was significant that doctors set out in their careers with hearts filled with passion for healing and helping, but the heartbeat gets silenced over time. They craft their responses for medical school interviews, making sure to tell that life-changing story that compelled them to choose this field. Once they become practicing physicians, however, the demands of the profession take over. Altruism and excellence are core expectations from doctors, and the challenge to live up to these expectations is constant. The pressure can result in feeling disillusioned and overwhelmed and may lead to the abandonment of the profession altogether. In the recent extreme situation of the COVID-19 epidemic, The Physicians Foundation found 61 percent of doctors reporting feelings of burnout; 57 percent reporting feelings of anger, tearfulness, or anxiety, and 46 percent isolating themselves, even contemplating and attempting suicide. What I sensed was that doctors bottle up their feelings. Giving them a forum where they can really open up liberates them. It brings forth stories and experiences which can rekindle and validate all the reasons why they chose medicine in the first place.

There are various forums that offer opportunities for doctors to express themselves. One is meetings in which honest, bidirectional communication with frontline health care workers is seen as a way to overcome the compounding of stress due to work-related or even personal concerns. However, this may not help to overcome systemic racism where frontline health care workers are predominantly from diverse ethnic backgrounds, and feel intimidated expressing their views before administration in which their groups are not represented. Among my interlocutors, junior doctors from ethnic minorities described how they would never feel comfortable sharing stories they told me with their colleagues or superiors from different backgrounds. Another forum was created by Michael Balint, a British psychoanalyst who proposed a structure for regular meetings among physicians to reflect on clinical encounters. Balint groups have facilitators and members, where conversations allow for seeking multiple perspectives on cases in a supportive environment. The advice needed is not necessarily about medical approaches, but about the personal side of caring about patients. Thus, these groups offer a middle ground between professional and private life. Michael Roberts says the group meetings allow him to emotionally metabolize clinical experiences. However, both these forums remain within the professional realm, where I believe doctors will continue to maintain their clinical composure and exercise some restraint in communication.

For doctors to hold back what is in their hearts can be exhausting and lonely. A common theme that emerged from my discussions was that my interlocutors said they never take their emotions home. Many patients remained on their minds even after they left the hospital, but as doctors, they didn’t talk about their cases outside work. No one ever asked them about the details of their day, nor did they wish to burden friends and family. And yet, they felt comfortable sharing their intimate thoughts with someone they had never met and would likely not meet again. I found that my conversations with doctors seemed to give them heartfelt relief, a professional catharsis to speak of children they had treated without conforming to their customary detachment. It is where I discovered their sensitivity and vulnerability. Many of them contacted me afterward to thank me for providing a safe space where they could speak so freely. What I offered was a neutral presence in the world of health care during my ethnographic research. As an anthropologist bound by the ethics of IRB, I was an impartial third party. With me, doctors had no reservations, which is what made a difference.

My experience has inspired me to think of some avenues to provide doctors emotional release. Hotlines, such as Physician Support Online, were optimized during COVID-19 for doctors to call in and talk whenever they needed to. This can offer great relief in times of emotional stress. Another possibility is a service that asks for volunteers to advise aspiring medical students. Contributing their responses confidentially to a researcher can encourage doctors to share their memories and stories as they had with me. In the process, they might reconnect with a former version of themselves. The notion of hotlines and safe spaces opens new avenues for research into physicians’ and medical staff’s mental health and well-being. It’s time for listening to the doctor’s heart.

Maryam Chloé Pervaiz is an anthropologist. 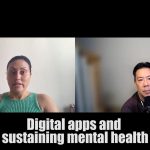 How to cope with pandemic fatigue