Smoking cigarettes is well known to cause heart disease, lung cancer, and premature death. In the face of these risks of death, quality of life issues that affect smokers are often overlooked. Although some quality of life issues such as cost, cravings, inconvenience, illness, and stigma are well known, some important effects are largely unknown to the public. For one, smoking is connected with a surprisingly large variety of pains.

There is evidence that smoking often comes before chronic pain and may have a role in causing it. Data from the Adventist Health Study showed that in a group of over 3,000 women, the strongest predictor in their medical histories of who would later be diagnosed with fibromyalgia over 25 years was the use of tobacco.

Another study investigated the relationship between smoking and how long back pain persists. The researchers found that people without back pain were less likely to smoke, people with chronic back pain were more likely to smoke, and that people who had new back pains for up to 4-12 weeks were more likely to still be in pain a year later if they were smokers. The researchers used fMRI brain scans to conclude that the effect of smoking on developing chronic pain may be due to activity in brain circuits related to addiction that is greater in smokers and that decreases with smoking cessation.

There hasn’t been a lot of direct study of the effects of vaping on pain. It is possible that tobacco affects pain for reasons unrelated to, or interrelated with, nicotine. That means it is possible that using vaporizers with nicotine juice may not affect pain in the same way as cigarettes. On the other hand, nicotine has short-term effects as a pain reliever, and there are good reasons to think long-term use of nicotine itself increases sensitivity to pain.

How can you help yourself or a patient quit?

If you smoke and would like resources or support to help quit, or if you work with patients and would like to offer them resources, a good place to start is with a quitline.

Quitlines provide a free and confidential service to assist people in quitting tobacco. Quitline coaches assist with education, developing quit plans and connect smokers with sources of smoking cessation medications which they can sometimes get for free. The use of quitlines and use of smoking cessation medications are both associated with higher success rates in quitting tobacco.

The Centers for Disease Control and Prevention has a quitline at 1-800-QUIT-NOW (1-800-784-8669) in English. They have separate phone numbers for the same service in Spanish, Mandarin, Cantonese, Korean, and Vietnamese. The National Cancer Institute has a Smoking Quitline at 1-877-44U-QUIT. Some states have their own dedicated quitlines.

Lee Flowers is a psychiatrist.

The goal of health care is in peril

Medical debt is the enemy of everyone [PODCAST] 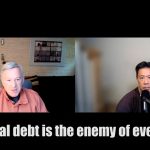