When the FDA approved Gilead’s Truvada (emtricitabine/tenofovir disoproxil) for HIV PrEP in 2012, it was a revolutionary step forward. The drug was safe and up to 99 percent effective in preventing HIV infection in at-risk individuals.

Then in 2019, Gilead received FDA approval for a second drug for PrEP called Descovy (emtricitabine/tenofovir alafenamide), with equivalent efficacy to Truvada. Recent research has shown that by the end of 2020, 28.5 percent of former Truvada patients had switched to Descovy.

Why are some people choosing Descovy over Truvada?

If these two drugs are equally effective, why are people switching drugs? To answer this question, I set up an informal Instagram poll, where I asked Descovy users to describe why they chose this therapy. Their answers are summarized below (some quotes edited for clarity). 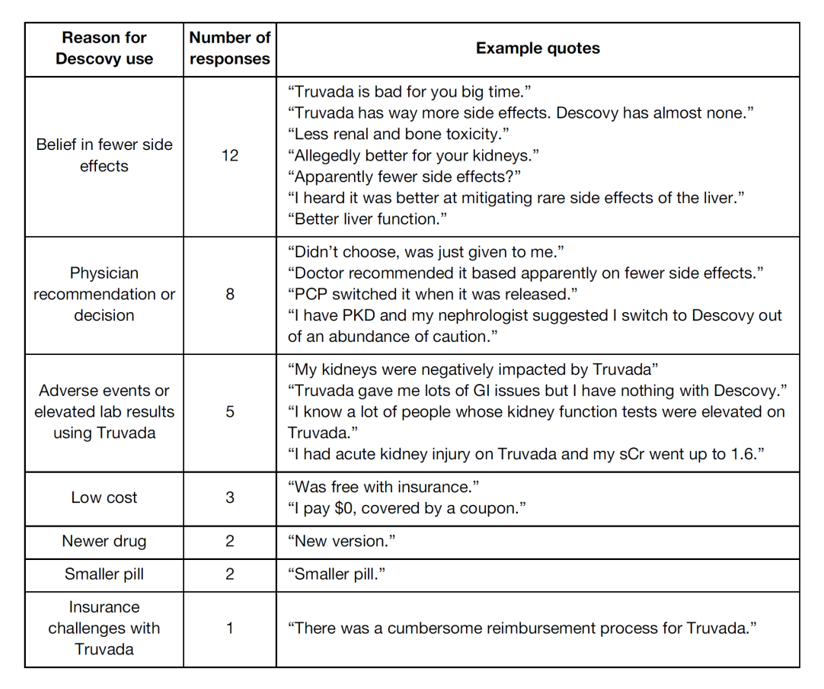 The most common answer in my poll was to do with “fewer side effects”. Let’s unpack this claim a bit.

In the pivotal study comparing Descovy to Truvada, there were indeed statistically significant improvements in markers of bone and renal health for Descovy. Specifically, at 48 weeks, Descovy had a higher estimated glomerular filtration rate (eGFR, +3.9 ml/min) and a change in bone mineral density (spine +1.6pp, hip +1.2pp).

However, statistically significant doesn’t necessarily mean clinically significant. Many doctors actually believe that these cherry-picked advantages of Descovy are overstated. In fact, in the same pivotal study for Descovy, there was no difference in the number of fracture events between patients taking Descovy and Truvada after 96 weeks, casting doubt on claims of improved bone health. Furthermore, an independent analysis estimates that over the course of 5 years, only at maximum might 0.02 percent of patients develop end-stage renal disease due to Truvada use. Thus, Truvada remains a very safe drug for the vast majority of patients.

Bone and renal health aside, Descovy may actually have a greater incidence of other side effects than Truvada: in particular, greater weight gain and increased cholesterol levels (+1kg and +0.28mmol/L at 96 weeks respectively). In patients with cardiovascular risk factors, Descovy may thus in fact be contraindicated. As a result, we shouldn’t simply say that one drug is much better or worse than the other. They simply have minor differences in side effect profiles.

The second most cited reason for Descovy use was physician recommendation or decision. However, it is likely that many doctors pushing Descovy probably did not have the time to review the literature on the drug, and were instead influenced by corporate marketing. On that topic, Gilead launched an especially aggressive marketing campaign for Descovy that included an enlarged sales rep force, countless ads in scientific journals, online media, emails to doctors, and repeated messaging specifically on bone and kidney health. As a result, many doctors probably switched to prescribing Descovy by default, but this doesn’t necessarily mean it’s actually the right drug for everyone.

Another reason given by respondents was simply that Descovy was “newer” and thus had to be a better drug. As demonstrated above in our discussion of efficacy and side effects, this is not the case. Lastly, another reason stated was that Descovy is a smaller pill than Truvada. While a benefit to some patients, this change is ultimately still just about convenience.

We have just shown that the two drugs are very similar despite perhaps popular opinion in terms of both efficacy and safety, and that any other differences are merely cosmetic. So does it matter then if we all just use Descovy then? I argue that Descovy is too costly to be worth it for everyone.

It is no accident that Gilead launched a new branded drug for PrEP just as the patent for Truvada was expiring. The more people that Gilead can switch to Descovy, the better it is for their bottom line. Unfortunately, Descovy also costs much more than generic Truvada. While generic Truvada can be purchased for less than $50 per month on GoodRx, the list price for Descovy is a staggering $1931 per month. To be fair, this is not the price that anyone (not even insurance companies) pays for Descovy, given the expected rebating by Gilead. But the point still stands: Descovy costs much more to our health system than Truvada does.

The United States already spends the most per capita on medical expenses compared to all other comparable countries. We should not be willing to spend more on healthcare unless we actually get clinical benefits. In the case of Descovy vs. Truvada, for the majority of patients, the “benefits” are so minor, if at all, to warrant such a price hike. In fact, even under the most aggressive safety assumptions in favor of Descovy, the drug should only reasonably charge on maximum an extra $31 per person per month. One must simply scratch one’s head at the steep price of Descovy and conclude that the cost just isn’t worth it.

The “slight benefit” of Descovy is fabricated in light of Truvada’s patent expiry. My doctor pushed Descovy, but I found he had $8,000 (from Gilead) when I looked up his required disclosures.

Instagram message from a friend in response to my poll

As individual patients, we often don’t think about these costs. In my Instagram poll, nearly everyone taking Descovy reported receiving the drug effectively for free, largely due to Gilead’s copay coupons. However, as with anything in life, nothing really ever is free. More patients taking Descovy rather than generic Truvada means higher overall spending by insurance companies. This eventually comes back to haunt us in the form of higher premiums, and is why we shouldn’t simply adopt a costlier drug like Descovy without good reason to do so.

Are there cases, then, in which there is a good reason to use Descovy? It is true that several respondents to my poll experienced adverse effects or elevated lab results with Truvada and thus switched to Descovy. I think in these individual cases, they do have good reasons to have made a switch. In such cases, it seems wholly reasonable that Descovy remains available to patients who demonstrably need it.

At the same time, these patients are probably in the minority of Descovy users. It has been found that only 27 percent of switches from Truvada to Descovy were medically indicated or appropriate, even when using generous inclusion criteria for what may be deemed appropriate. Most people do not need to be on Descovy, and Truvada remains an excellent first-line option for patients desiring PrEP.

It is great that we now have additional options for PrEP. Yet the high cost of Descovy, and its minimal, if any, benefits to Truvada mean that we shouldn’t all be jumping to use it. Instead, generic Truvada should remain the mainstay and first-line option for PrEP.

A COVID and Omicron update with Jeremy Faust, MD [PODCAST]

Backdoor Roth conversions may be going away: What this means for physicians 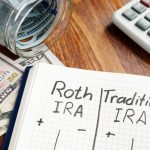