Ellen DeGeneres is ending her popular TV talk show next year after 19 seasons. The need for the type of celebrity and crowdsourcing donations she is known for to assuage an individual’s health care needs to end as well.

This accepted norm is gaslighting at its finest.

As a fan of The Ellen Show, I don’t feel warm and fuzzy after seeing a patient facing cancer with a large medical bill moved to tears because a company just gave them $10,000 towards their debt.

The average American can also take on the same hero role via GoFundMe or other applications to help move the bar for the amount raised a little closer to the goal for a person who needs a kidney transplant. Many fundraising options are available to help the families of victims of the recent Waukesha Christmas parade tragedy, which left five people dead and more than 60 injured, including children.

On the surface, these seem like good things, but they are a band-aid for a perpetual problem. These funding gaps can be filled with better systems and processes on the local and federal levels from the government as well as public and private institutions, companies, and organizations. Then there may be the true impact on these stories that so often move us to tears.

My cousin was born nine years ago with several chronic health conditions that require him to regularly see specialists all around the country, including a neurosurgeon in Texas and a cardiologist in Wisconsin.

Because of this necessary care, he gets to be a normal child who loves to play video games and soccer. His quality of life is only possible with the medical care that he receives. His condition is chronic but managed. Unfortunately, the medical financial burden is chronic as well.

Early on in his life, friends and family had an in-person fundraiser event for him because the bills were piling up despite the insurance coverage. Many people gave generously.

However, he required several more procedures since then and the bills quickly out-paced the amount raised.

After submitting his story several times to producers of The Ellen Show for help on his behalf, I envisioned him sitting on the couch across from DeGeneres with a check bigger than his body, pictures of him in the hospital with a bandage wrapped around his head on the jumbo screen behind them, and tears of gratitude rolling down his parents’ cheeks.

The invitation to the show never came.

As a nurse practitioner and a registered nurse, I know that I cannot refer the great number of patients I have worked with who are struggling to pay for health care to talk shows or GoFundMe even though they have equally heart-wrenching stories.

But does this common private and out-of-pocket spending in the U.S. improve outcomes anyway? The data says it does not.

In a report comparing the U.S. to 10 other high-income counties, researchers found that the U.S. spent almost twice as much on health care with the difference mostly attributed to private and out-of-pocket spending. The result: the lowest life expectancy of the group.

For those who are enduring health struggles, patients and health care professionals need consistent systems in place that can meet these needs.  Local, state, and federal legislation needs to expand health care coverage and access that has a comprehensive impact rather than elevating a few of many stories.

The United States has a long way to go to make this shift, but surprising players recognize the problem.

According to GoFundMe’s website, more than 250,000 medical fundraisers raise $650 million per year. Not only are these individual fundraisers difficult to regulate, including cases involving fraud, but the CEO of GoFundMe also recognizes that comprehensive health care is a right, and the solutions lay at the local, state, and federal levels of government.

This is because while 250,000 is a substantial number of lives, legislation like the Affordable Care Act (ACA) has increased the amount of people insured by almost 20 million people, according to a 2021 U.S. Human & Health Services report.

Organizations seeking to improve specific health outcomes also target changes at the legislative level. The American Cancer Society offers individual involvement through programs like Relay for Life and Making Strides Against Breast Cancer that have raised $8 billion dollars since 1985.

However, the first fact they highlight on their “Get Involved” tab is that the federal government is the nation’s largest funder of cancer research. Likely due to this, they have a separate advocacy affiliate, the American Cancer Society Cancer Action Network. ACS CAN advocated for and helped pass laws that required insurance companies to cover cancer screenings like mammograms, colonoscopies, and Pap tests.

To be sure, popular initiatives like the 2014 Ice Bucket Challenge that raised $115 million for the ALS Association increased awareness and made advancements for specific diseases.  However, there shouldn’t need to be a trend for adequate investment to occur toward a devastating disease. Instead, there should be consistent funding through legislative policies.

In addition to policy shifts, perhaps an active shift in how to think about these funding gaps is necessary. The next time a story about a child who has debt-crippling medical care before they have had a chance to start school appears on social media or TV, consider a strategic plan of action.

Instead of trying to earn a spot on a talk show to help a person dealing with costly treatments for illness, perhaps it is best to lobby policymakers to pass legislation that impacts big numbers of patients dealing with the high costs of treatment, ultimately including that person. Perhaps encouraging businesses, institutions, and organizations to allot funds for health care programs is a more salient idea.

Talk shows end. The need to close the gap in medical funding does not.

Amanda LaMonica-Weier is a nurse practitioner.

Tired of the dying: Finding parallels in COVID-19 and HIV

"Take it or leave it" is not negotiation but coercion [PODCAST] 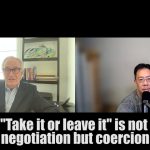