For decades, I was constantly told how brave I was and wore “brave” like a scarlet letter on my chest. Brave for choosing to raise my children alone. Brave for becoming a nurse practitioner. Brave for going public with my story of child sexual abuse and complex PTSD. Brave for being willing to stand on a stage and talk about my journey.

I was so convinced of my brave-ness that I bought into it. I believed that to make it through life, you had to be brave. That to show up meant to grin and bear it with a smile, never allowing hurts and vulnerabilities to surface.

Brave was hard, though. And lonely. And isolating. The big scarlet letter B on my chest that to others stood for brave meant broken to me. The truth is, I wasn’t brave. I was bruised, bullied, and mentally beaten into believing life was about showing up for everyone else and leaving myself behind.

It turns out, what everyone thought was me being brave, was actually dissociation. I had separated from the abuse that I endured. I left the wounded little girl in me, who needed my braveness more than anyone, behind. I was terrified of her. Brave is not terrified. The two cannot exist together. I had to be one or the other. I had lived through enough terror, so I shut it down and sided with brave.

We often think that being brave is the thing that will help us move forward. That it takes bravery to stand up for what’s right or meet some challenge. But what if we have it all wrong?

Brave kept me stuck in the lie that I was not allowed to feel the unbearable pain that comes with years of childhood abuse. Stuck in the lies of self-worthlessness, shame, and blame. Stuck in the belief that I had to appear strong and “fine.”

The little girl in me wore weary of my nonstop braving through life. She needed me to be brave for her, but I was terrified of her. A battle waged within me. I needed to keep the facade going of the nurse practitioner who was rising above it all. Yet, I was ripping at the seams. As my anxiety and depression grew worse, I considered ending my life as I sat soaked in shame, asking how someone so supposedly “brave” could be terrified of reaching out for help.

Bravery and courage are generally considered synonymous. They aren’t. Courage includes the presence of fear. Bravery lacks it. Bravery is a characteristic that doesn’t involve much feeling. Courage is different. It involves a cause that usually includes love, compassion, and empathy. Bravery maintains its essence even without a cause. Courage is the result of mindfulness. Like bravery, it requires physical presence, but courage also requires mental presence. It is the decision to fight despite one’s fears. The choice to step into hard things with your whole self – body, mind, and spirit. Brave happens in the mind. Courage happens in the heart.

Many who know me know that I can’t stand when nurses are called superheroes. Superhero mentality expects nurses to be brave. To act without concern for themselves. To swoop out of their homes, another patient’s room, or even the bathroom when their pants are down, at a moment’s notice, with no regard for themselves, no matter how much emotional or physical exhaustion has set in. They must be brave, and if not, shame on them. They don’t dare be afraid or struggle because to see our superheroes have fear or worry means that we too, may need to experience those things. To see our superheroes struggle means that we may have to look at our own struggles. That we may need to accept that some serious shit is happening, and it is terrifying.

Here is the thing, though. When we strip away the brave and step into the fear, we take back our humanity. We learn that brave is hiding us from each other, and when we learn to tolerate the fear, we become better humans. Our connections are deeper. We truly see each other with compassion and empathy, free of judgment and shame.

I’m no longer brave, nor am I broken. It turns out, I was never either of them. I’ve reconnected to the light inside of me that was always there, but I had forgotten due to living through some really dark times. Now, I am un-brave and have stepped into my courage.  I lead with my heart, not my head. Without brave, I don’t white-knuckle it through life anymore, force myself to rise above, deny the past, or disconnect from hard truths. With courage, I step into making change, healing hearts, using my voice, sharing my story, and tending to my own humanity, partnered with the fear that often wells up in me.

I’m not brave. I’m just me. Full of light and lifted by my light. You see, when you strip away the darkness and lies that others surround you with, you’re left only with your light. The genuine you. Moving forward in life in ways that are authentically you. Not because it’s brave to rise above and be disconnected from your humanity, but rather because when you become un-brave, you step into your own courage. Courage has understanding of what you’re doing and who or what you’re doing it for. Courage gives you permission to feel the feels, and connect not only with others, but also with yourself.

Whether you’re a nurse, an abuse survivor, or whatever has led to your belief that brave is the face you need to show, I hope you give yourself permission to become un-brave. Step into the courage that allows you to embrace the fears that are the keys to your strength, compassion, and humanity. May you show that courage first to yourself and the parts of you that are hurting, so that you can be genuinely and authentically courageous for others.

Traci Powell is a nurse practitioner.

Physician communication using the tools of a trial attorney [PODCAST] 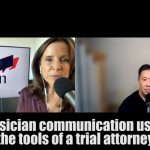 Reflections after the last ER shift

If you’re a nurse or an abuse survivor, you don’t have to be brave
5 comments