Shellee Cohen defines “stratified reproduction” as the practice in which society assigns value to offspring and, therefore reproductive capacity of different groups of people. While commonly race or socioeconomically based, this can be based on any category we can divide people.  This concept is ever-present in medicine, even in the most progressive environments. This became most evident when  I was sitting at my desk in an outpatient gynecology office, clicking away at notes in my liberal Midwest town. I was chatting with one of the attendings about a woman who had been overly surveilled in her pregnancy and who had ended up getting an early C-section due to an abnormal biophysical profile at 34 weeks. My attending commented that “I guess they were extra careful since it was an IVF pregnancy.”

This comment rubbed me the wrong way. I couldn’t put my finger on it, but I remember writing down the comment to go home and think why I didn’t like it so much. As I pondered this comment, I wondered, “Shouldn’t we be careful in every pregnancy? Was there something about the fetuses of people who tried harder to grow them that we should try to save them more? Because she had access to IVF, was she more likely to sue us if something happened? Why was this fetus more precious than any other?”

It was an awkward feeling that I was grappling with. But I noticed it everywhere I looked. The IVF pregnancies, which are largely achieved by white, upper-middle-class women, get earlier ultrasounds. They get earlier detection of pregnancies located outside of the uterus and, therefore, earlier care for ectopic pregnancies (which is life-saving and more likely to preserve fertility). They get referred to maternal-fetal medicine doctors readily and early, often even before pregnancy, to optimize their health. Doctors spend long amounts of time with them automatically and try tirelessly to answer their questions and quell their anxieties.

Their medications and medical histories, albeit sometimes more complicated, are thoroughly reviewed. The outcomes of these pregnancies matter more and are readily recorded in the Society of Assisted Reproductive Technology database.  This is indicated by the multiple comments which can be overheard about Black women who have had more than four pregnancies, such as, “Is she trying to raise a baseball team,” or “She needs to get her tubes tied.” This is also evident by the obstetricians who have their hands on the doors during the entire prenatal visit with Black women.  There is a failure to dive deep into Black women’s concerns; doctors run to perform salpingectomies even when patients state things like, “If I change my mind, I can always have my tubes untied.” (A comment I have heard enough times to reiterate to every patient about the permanence of tubal ligations in multiple different ways.)

Is it really that these are IVF pregnancies and not that they are commonly white women who carry these pregnancies? That is unlikely given the maternal mortality rate, which disproportionally impacts Black women regardless of socioeconomic status. It also begs the question of whether or not Black women’s pregnancies are more likely to result in stillbirth and maternal mortality simply because physicians just don’t care enough about them. I wonder often if this is just one of the cogs in the wheel of stratified reproduction in which Black babies and Black women matter so little that the medical community feels comfortable ignoring so many of the concerns posed by Black people, especially during pregnancy even though this is the only time many people of various background ever seek medical care.

The medical community must pay attention to how it is not always transformative, against the grain, liberal, or even equitable. While comments such as the one I stated above might seem benign, they reflect how we view the state of reproduction and the role of medicine in reproduction. Every ongoing pregnancy a person chooses to continue carrying should be treated as precious and worth protecting. Everyone should be fiercely caring for every baby and being careful. Not just our white, upper-middle-class IVF babies.

I was thinking about retiring, and COVID-19 gave me a push [PODCAST] 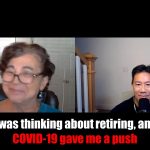 Crossing the liminal space of the pandemic