“They are firing me for not getting the COVID vaccine. I can make more money working at Michael’s than I do at this job. I was only doing this because I like to help people. But this is it for me. I’m quitting. I’ll miss the patients, but I cannot be forced into doing something that I don’t believe in.”

The patient care tech said to me after putting my patient in the room. We had just received a system-wide email from the hospital administration that due to the New York state’s health care employee vaccination mandate, all health care employees who refuse to receive the COVID-19 vaccine, would be terminated in a few days.

I am as pro-vaccine as anyone could possibly be. I have received the Moderna vaccine myself, and I have had my teenage children vaccinated as well. I have been quite open and vocal about the benefits of vaccines in front of my patients and colleagues. I even wrote a KevinMD article supporting COVID vaccines. I ask my patients to trust me when I tell them that they should also receive the vaccine. I make it clear to any of my patients or colleagues who refuse to get vaccinated that, in my opinion, they are making the wrong decision, but I also tell them that I respect their decision. At every encounter, I try to change their mind a little bit, hoping that they will start trusting the science and eventually make the right decision. But I do not force my decision upon them.

The practice of medicine was quite paternalistic up to a few decades ago. When I was a resident, our teaching attendings used to tell us that not too long ago, the doctors would assign the code status for patients without having them even participate in the decision-making process. With time, patient autonomy has become more important, and in today’s world, adult patients make all health care decisions by themselves after being adequately informed by their care providers. Under such circumstances, penalizing a patient for making a decision pertaining to their own health seems rather outdated.

There are multiple examples in medicine where patients make decisions based on their beliefs which are considered “wrong” or unbelievable by others. For example, a Jehovah’s Witness patient will refuse to receive blood products despite life-threatening anemia, which is widely acceptable to health care providers. Not too uncommonly, my patients struggle with the concept of “adjuvant” chemotherapy. This is when a tumor has already been surgically removed and the scans do not show any cancer in the body. At this time, chemotherapy is given to reduce the chances of the cancer coming back. Patients refuse to have “poison” injected into their veins, pointing out that their scans are negative, choosing to ignore and doubt the plethora of clinical evidence that backs this approach. Muslims worldwide choose to fast for long hours during the month of Ramadan and risk dehydration, orthostatic hypotension, and hypoglycemia in the face of kidney disease and diabetes and yet feel empowered and happy about their decision. As health care providers, we often roll up our eyes in these instances but do not force our recommendations upon them.

Some argue that receiving a vaccine is different because it is not just about the patients themselves but also about the community since unvaccinated people are putting others at risk. That is true, but not entirely. We know that vaccinated people can also acquire and transmit COVID infection, albeit at a lower rate. If unvaccinated hospital employees wear personal protective equipment (PPE) and are given non-clinical roles when possible, the chances of transmission of infection could be reasonably curtailed.

My problem with mandating vaccines for health care workers is that such restrictions feed into their mistrust for the vaccines. People who have decided not to get the vaccine are clearly being led by the factually erroneous beliefs that have been fed to them by various resources, including various forms of media and word of mouth. The endorsements of major health care organizations such as the CDC and FDA are quite clear, but they choose to doubt them. The anti-vaxxers do not mean harm to other people in the community but truly believe that they are making the right decisions for themselves and their children. They are not mentally inferior or challenged but rather very intelligent people with different perceptions of the same situation. How can we, as health care providers and policymakers be so arrogant and naïve to think that we should force our decisions upon them?

As a physician, I cannot think of many treatments for various disorders where I can quote a hundred percent success rate to the patient. Similarly, when it comes to the issue of vaccines, it would be unreal to think that a hundred percent of the population would be willing to take the vaccine. When health care policies are made, it should be kept into account that a portion of the population will not immediately, or ever, agree to get vaccinated.

Unvaccinated people should be left alone, and accommodations should be made for them to remain functional in their jobs. Stringent measures should be taken for them to be routinely tested and have them wear PPE and be given preferably less clinical roles. Over a period of time, which could be months or a few years, when the same people see that only those around them are getting seriously sick and dying are the unvaccinated ones, their thought process will automatically shift in favor of vaccines. But if we force the vaccines on them now, they will become spiteful and will keep refusing the vaccines for a long time to come or perhaps forever, perceiving it as a “rights” or “freedom” issue rather than a health care issue.

I see statistics every day in the newspaper purporting the success of vaccine mandates. They are looking at the number of people being vaccinated. The higher the number, the more successful they claim to be. In my eyes, this may be a short term win of increasing the numbers but every person who is against the vaccine and yet getting vaccinated just to keep their job, or deciding to quit their job and remain unvaccinated, is being made to do something against their will and we are losing their trust. This unquestionably hurts the vaccine cause in the long term.

Why have we become so polarized as a people? We are polarized in politics, race, religion, personal liberties, and almost every aspect of life. Why do we have to be so polarized in health care? Why can’t we strive to find the center of every issue at hand? Why can’t we meet in the middle? If I am pro-vaccine, why do I have to be pro-mandate? Polarization worsens problems. Let’s try to meet in the middle and respect the anti-vaxxers. Let’s use mutual respect and trust rather than reprimand and fear to win the vaccine debate. 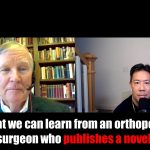 Does pro-vaccine always have to be pro-mandate?
3 comments