The day that my 82-year-old mother was scheduled to receive her first COVID vaccine, she was admitted to the intensive care unit, critically ill with COVID pneumonia.

It was late January. My siblings and I hadn’t heard from our mother in a few days, and we were worried because she lived alone. Joanie was a democrat and a CNN junkie, who was sure to be watching as the Trumps helicoptered from the White House for the last time. I called her several times from Vermont, expecting her to pick up to chat about Biden’s inauguration. When she didn’t, I called my brother Tom back home in Ohio. Tom went to check on her, and found her weak, dehydrated, and confused. In the emergency room, she tested positive for the SARS CoV-2 virus.

Twenty-three days later, the virus had ravaged my mother’s body. She was unconscious but still clinging to life. Death was an inevitable formality.

Ironically, she no longer tested positive for the virus. My siblings and I could gather in her room in the medical intensive care unit at St. Elizabeth’s Hospital in Youngstown. We were “lucky.” Legions of other families never had the chance to be with their loved ones when they died of COVID-19. Hard as it was, we were grateful.

My mother lay strapped to a bed, alone in a single room falsely bright with cold, stark fluorescent light. It seemed like the opposite of what she needed—warmth and a softly lit room, not one that reeked of urine and antiseptic. Ties threaded her wrists, securing her hands to the bed. A nurse told us that Joanie had been agitated and kept pulling the ventilation prongs out of her nose. The restraints stopped her from removing her only oxygen source. A ventilator forced her breath. Its loud, precise rhythm hissed the only clue that my mother was still alive. Her body told a different story: cheeks wasted to skin over bone, eyes sunken, dirty hair matted against her bruised temples, a catheter bag muddied with blood. And then her mouth, horrific and gaping, its inside blackened like gangrene.

Dr. Muneer Al Zoby—the kind, exhausted pulmonologist who treated our mother—told us that she had COVID pneumonia. Its effect, he said, was akin to “taking a blowtorch to the tissue of the lungs.” After enduring the isolation and anxiety of pandemic lockdown, I was not prepared to witness the ravages of my mother’s death from COVID pneumonia.

Even my sister Laurie, a take-charge pediatrician who rarely shows her feelings, was visibly shaken as we stood at the bedside of our dying mother. Seeking to restore a measure of dignity, Laurie gently tried to close our mother’s gaping mouth, but her jaw was locked and immobile, vulgarly exposing her black, shriveled tongue. I leaned over her too, pulling a comb fitfully through the sticky gels in her hair. Joanie would have been mortified, I thought, to be seen in this condition. Gray roots nearly an inch long? She never left the house without lipstick or a fresh manicure.

A gold chain strung with my mother’s favorite cross lay trapped in the fold of her neck. I wondered if it was choking her. I untangled it, knowing that my mother would be glad to have it on when Monsignor Shiffrin arrived to give her last rites.

Later that day, my mother’s doctors removed her ventilation. Laurie and I sat vigil on opposite sides of her bed, sleepless as we considered the mournful reality before us. My mother breathed with irregular, jagged breaths. They were the only sound in the room now. Time felt frozen – unable to move back or forward, like labor before delivery. Chelsea, the nurse who cared for my mother on the overnight shift, floated in and out like an apparition. As sunrise came and went, I stood at my mother’s bedside and rested my palm on her forehead. Chelsea stood opposite me. We were nearly mirror images of one another, touching my mother, crying as I said goodbye. Seventeen hours after her ventilation was removed, my mother finally stopped breathing.

Laura Joan “Joanie” Sewickley, died on February 12, 2021. Hers was one of 3,013 lives claimed by COVID-19 in the United States that day.
As I write this nearly nine months later, I remain deeply in the moment of my mother’s passing. I wonder now if the experience of intense trauma, such as being with a loved one when they die, heightens one’s perceptions. Because even though I was heartbroken to say goodbye to my mother, at that moment, my attention was divided. Despite my grief, I was keenly aware that my mother’s passing from COVID had grown routine for Chelsea. During the pandemic, she and other frontline hospital providers had been through this ritual of needless death countless times over many months. My tears were partly for them.

Many of the nurses from the unit, some of whom I’d never met, descended upon the room after my mother’s death. I wasn’t sure how I was supposed to receive them. I was grateful that they were there, but it was strangely surreal that this private moment had become a community gathering. I imagined that they honored the moment of her death feeling helpless. Perhaps there was a moment of gratitude toward my mother, who had also spent her working life as a nurse at this very hospital. But in reality, the nurses were just marking one more life lost to the plague that has ravaged so many lives. As quickly as they descended, they left. They had to get back to work.

Judith Markey is a psychologist.

How to navigate residency probation

I do not want to be resilient [PODCAST] 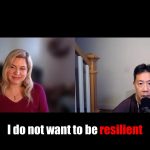