In many ways, this woman was similar to other patients I have seen after a diagnosis and treatment of breast cancer. Her hair was growing back, and I immediately noticed that she was comfortable enough to not be wearing a wig or head covering for our Zoom visit. I keep my hair very short by choice and I find this can be an icebreaker when I see women for the first time during or after chemotherapy. At our previous visit, she asked for information about lubricants because she felt that she was ready to start having sex again a year after treatment. Now, one month later, she had purchased what I had suggested, but that was as far as she had come regarding having sex again.

I always explain to patients, male or female, that I do not have an agenda for them when it comes to their sexuality, whatever that means to them. If I do have a wish for them, it is almost always about getting the patient to communicate to their partner about what they want and to encourage the partner to be honest about their own feelings. After two decades of doing this work as a sexuality counselor, I believe that sex is 90 percent about communication and 10 percent about the physical act itself.

After telling me that she had bought the lubricant but not done anything with it, she told me that she did not know how to approach her husband, and she was unsure how she would respond to his touch. She had lost confidence in herself as a sexual being and was not sure what to do about it. When I asked her if she had told him of her concerns, she admitted that she didn’t know how to start the conversation. She thought he was no longer attracted to her altered body, and she was afraid for her relationship.

I asked about how their relationship had changed after her diagnosis. Her eyes filled with tears as she told me that for years, she had been “so busy living” that there were aspects of him that she had ignored. But they were made clear after her diagnosis. She described his strength that had supported her, and his sense of humor that had lifted her during difficult times. She told me that he listened, really listened, to her. He was generous and kind and put her first. In professional terms, we call this post-cancer relationship growth, but to her this recognition was the silver lining that came from her cancer.

She talked about the busyness of her life before cancer; the house and yard, family and friends, work and leisure activities, the caring and organizing, and controlling that many women find filling their every moment of the day. But cancer had forced her to stop and notice, and in that pause, she was able to see all the good in him and this had enriched her appreciation and love for him. I listened as she talked, silently grateful for yet another lesson learned from someone who wanted me to help them with a problem. It was me that received a life lesson in grace and humanity. I am humbled by these lessons, learned by me in silence and hope.

Why physician-owned businesses need our attention and support [PODCAST] 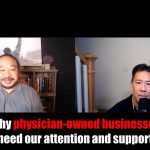