A few years ago, a Chicago-area fertility clinic ran a series of radio ads at the same early hour each morning. For weeks, I woke to a woman’s energetic voice cutting through the fog of my semiconsciousness, announcing her gratitude to the center’s reproductive specialists. “Without them,” she proclaimed brightly, “my baby wouldn’t have my blue eyes and my husband’s wide smile.”

Ten years earlier, I myself had driven 20 miles to the same clinic, several times a week, usually in a predawn stupor and infused with hormonal angst. After having my blood drawn, ovaries ultrasounded and medications adjusted, I’d race back to the busy clinic where I worked as a family physician.

My patients included many pregnant women, new mothers, babies whom I’d delivered and elderly matriarchs, so, during visits, I was often asked whether I was a mother myself. I learned to be honest (“Not yet!”) without giving too much away.

But my professional facade broke down when I looked in the mirror; especially at the end of a long day in clinic, or after delivering a teenager’s baby at 2:00 in the morning, or when receiving the phone call at the end of yet another failed cycle, assuring me that a few small changes in the regimen would improve our chance of success.

After four years of treatment, I’d collected an embarrassing number of speeding tickets–plus twenty pounds, bruises from daily injections, scores of negative pregnancy tests, and four miscarriages. I had not, however, achieved the center’s radio-announced prize: the baby who looked like my husband and me and shared our genetic makeup. Nor would my husband (who is also a physician) and I be counted in the “success” column for assisted reproductive technology.

Since ancient times, infertility has been portrayed as a curse, a sin, or a failing. Modern science has medicalized it, but our collective psyche has been slow to catch up. For many, infertility remains as much an existential crisis as a physiological one.

The drive to pass on our genes through procreation has powerful roots in biology, family, and society. We now know that human beings everywhere share in common all but a tiny fraction of our DNA. But that fraction fascinates us: It has the potential to bind us together or to differentiate us from one another; to unite us or to fracture us. Tens of millions of people worldwide have taken DNA tests hoping to learn more about their family connections, ethnic origins, or heritable risk factors.

Clearly, our genes forcefully influence who we are and how we see ourselves.

As I’ve learned from personal experience, though, genetics is not the only factor in our identity–nor does it write the most consequential chapter of our story.

When it became clear that our path to a family was taking some unexpected turns, my husband and I sat down with the fertility specialist. He offered us a bewildering array of new options that promised an excellent chance of success: various combinations of donated eggs, sperm, and reproductive organs.

When you’re privileged to have such options, you reach a crossroads: the choice whether to take the next step on a particular path, or to change direction altogether.

No answer is right for everyone; there is no moral certitude or foolproof guide. And there are no guarantees, only a comfort level with the risks of any given choice.

After much questioning, learning, and introspection, my husband and I decided to forego further infertility treatments in favor of adoption–specifically, international adoption.

In some ways, adoption resembles a human pregnancy: It has a gestation period (almost always much longer than pregnancy’s 40 or so weeks) filled with dreams, preparation, worry, and doubt. Birthing a family through adoption lacks the physical pain of labor and delivery, but it is nonetheless accompanied by waves of exhaustion, panic, and exhilaration.

We didn’t meet our children until they were seven months old–two bald and beautiful babies living in an orphanage thousands of miles away. We knew very little about the biological parents’ health and genetics, about the babies’ gestation and birth or about the quality of their nutrition, housing or social interactions. We faced a reality entirely different from the one we’d envisioned when first planning a family.

And yet, having relinquished control, when we gazed into the faces of our children for the first time, their eyes seemed to ask what had taken us so long–and we two scientifically trained physician-parents fell immediately and completely in love with them.

That was 15 years ago. Our children and we share not one bit more DNA than the 99.9 percent that’s shared by all seven billion humans on the planet.

And yet, our family is no less real than one formed by the joining of DNA.

Still, that word–real–slips easily from the lips of curious acquaintances and well-meaning loved ones: “Do they ever ask about their real parents?” or “Are they real siblings?” and “Did you ever want real children of your own?”

The unspoken implication, of course, is that genes, or perhaps gestation and childbirth, are the hallmarks of an authentic family. With all due reverence for those things, I assert that it is a daily commitment to muscular love that defines and unites a family. In the midst of calming my children’s sickness or sadness, sharing meals and a home and heartfelt laughter or overflowing with a parent’s joy and pride, I wonder at the notion that our life as a family could somehow be unreal.

I have learned what is real for me by creating a space for the curious mixture of joy, imperfection, complexity, and awe that is family — that is life itself. Our family’s story began with experiences of loss on two sides of the globe. I do not know my children’s birth parents’ story, but I honor it and will always be grateful to them.

For myself, I can only say that I have found my greatest joy on the other side of loss. I feel thankful for a great deal in my life — including the science that is the basis for my profession and that holds so much potential for improving the health and well-being of humanity and the planet we inhabit. But I am most grateful for the forces that supersede science and biology, reminding us that love is still the most powerful force in the universe.

I hope that my children will always know this — and that they’ll know that their story, and their family, is imperfect and beautiful and evolving and alive.

Because it is, in fact, real.

Anne Jacobson is a family physician.  This piece was originally published in Pulse — voices from the heart of medicine. 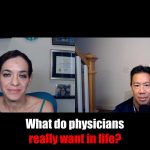