If you are confused about delta and how well the vaccines protect against infection right now, I don’t blame you: We are learning and updating data in real-time, and it is hard to keep track of it all. So maybe this analogy will help.

Think of the vaccines like an umbrella, and it’s raining outside. Before delta, the rain was maybe a drizzle. Most people who had an umbrella were not getting wet at all, and could go outside and do pretty much whatever they wanted without concern of getting wet. Very rarely, a person with an umbrella might get a few drops on them, but overall they were staying very dry.

Enter delta: a downpour. Umbrellas are definitely still helping, and it’s way better to have one than to be stuck in the downpour without one. But because it’s raining harder, some people with umbrellas are getting a bit wet. They are still far less wet than those without umbrellas, but some are more wet than they were before when the rain was just a drizzle.

Vaccine effectiveness against delta is slightly reduced from what we were seeing pre-delta: Instead of more than 99 percent efficacy against hospitalization, now it’s closer to 96 percent. But 96 percent is still way better than zero. Just like in a downpour, it’s still way better to have an umbrella compared to no umbrella, even if the umbrella isn’t providing 100 percent perfect protection.

People are getting stuck in this “all or nothing” thinking about the vaccines — acting like they must work 100 percent perfectly or they are useless. But that’s not how it works. 100 percent perfect protection is too high a standard to achieve, and was never the goal. The goal was to reduce severe disease and death as much as we possibly can. And the vaccines are doing that, even against delta.

Kristen Panthagani is a medical student and can be reached at You Can Know Things.

You have options when it comes to board certification [PODCAST] 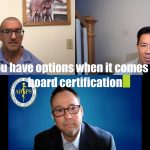 A medical student's guide to taking a social history