The page comes during a lull on an otherwise busy day in the well-baby nursery (WBN). My pager’s shrill cry rouses me like the blast of a starting pistol.

Translation: Twin birth. Baby A is STRESSED. Baby B attempted a front flip but got stuck. HURRY.

The race is on, and I am determined to win, bolting out of the team room before my senior resident can even set down her coffee. I sprint through the core of the nursery, a long hallway of adorable, narrowly avoiding the cleaning lady’s cart as she pops out from behind a door. I dart past stunned mothers pushing their precious angels around in baby carts. The mothers’ eyes meet mine, their Mama Bear instincts activated, chests out and mouths agape. Go ahead: Try to steal my baby. I DARE YOU!

Like a sprinter pushing out of the blocks, I accelerate and then dash through the halls of the hospital to the labor and delivery unit until I finally reach the operating room. I’ve won the first race, though I receive no medal for this. There will be no medals awarded until the babies are out of the womb enjoying skin-to-skin bonding with the mother. My performance depends on theirs, and vice versa. We are inextricably bonded, though we have not met each other yet.

Inside the operating room Baby Boy A is out on the resuscitation cart already. The neonatal intensive care unit (NICU) respiratory therapist is warming, drying, and stimulating the little screamer with a blanket. His screaming reassures us everything is alright. While the obstetrics resident works on extracting little Baby B from the womb, I work on calculating Baby Boy A’s first Apgar score, a composite of the annoyingly difficult to remember five characteristics of newborns used to assess their health at birth. Respiratory effort (vigorous crying is awarded full points), heart rate, tone, color, and … um…. ah … oh yeah, reflex irritability! Two points for each category give a total out of ten.

Little Baby Boy A scores a nine out of ten at one minute, beautiful for everyone involved. Technically he has scored higher than Baby Jesus did two millennia ago. Think about it. When Jesus was born, He supposedly didn’t cry: He was too “perfect” to cry. Yet, if Baby Jesus didn’t cry, then He wouldn’t have scored a perfect Apgar.

Since Baby Boy A has already surpassed The Divine in his first minute of life, we simply need to dry him off. Though he effortlessly completed his first and only run, the cheese-like vernix caseosa coating his body is thick. I struggle to wipe it off as the obstetrics resident struggles with Baby B, who is trying their best to remain in mother’s womb.

The pressure is on for Baby B. Not only is Baby Boy A the elder now, but he’s also scored a near-perfect Apgar. Baby B is stuck. A glance over the attending obstetrician’s shoulder reveals a tiny foot protruding from the birth canal. In a perfect world Baby B would have come into the world headfirst like an Olympic diver, not a long jumper. The obstetrics resident takes the baby-foot-baton into her hands and yanks on it with a firm sprinter’s grip to expedite the delivery. Watching her pull on the leg, I become lightheaded and nearly pass out.  Taking a deep breath, I right myself and turn away as the resident extracts the child from the mother’s womb. Little Baby B (it’s a girl!) is now in the resident’s hands, but the only crying I hear is from Baby Boy A, who just scored another nine on the five-minute Apgar.

Baby Girl B is purple, limp, and quite frankly, looks dead. It’s time to pass the baton to the next relay member: me, the pediatrics intern.

“She’s floppy and blue; get ready to ventilate,” I shout to the respiratory therapist.

Once the attending cuts Baby Girl B’s umbilical cord, the obstetrics resident plops the bloody, vernixy baby into my gowned and gloved arms. I delicately set Baby Girl B onto the neonatal resuscitator, a crib-like contraption that has a heating lamp, suction, and an oxygen source built-in. The respiratory therapist, a neonatal ICU nurse, myself, and my senior resident go to work drying off the baby and rubbing her back (this aggravates babies). I flick her toes for good measure (also annoys them). Baby Girl B is unfazed by our efforts. Much more concerning, her heart rate is less than 100 beats per minute when I squeeze her umbilical stump. This calls for aggressive measures.

A newborn’s heart rate is exquisitely sensitive to their breathing: no breathing, no or low heart rate. That’s where ventilation comes into play. Pump a bit of air into those itty-bitty lungsies, and more often than not, you end up with the respiratory effort of a world-class marathoner. We do just that to Baby Girl B through a mask. I stop ventilating when the resuscitator beeps for the one-minute Apgar. A quick check of her umbilical stump reveals a beautiful pulse.

“Where do we stand?” asks my senior resident.

“Two for pulse, zero for tone, color, grimace, and cry,” I anxiously reel off like a broadcaster calling a tight race, “that’s two at one minute.”

It’s a perfect ten! Had she let out such a vicious cry when she was ripped from the birth canal, her Apgar may have been a ten, too. Female Jesus?

Now that she’s revived, Baby Girl B is baby cussing up a storm at us. She alternates between the typical baby cuss words:

“Wah” = Screw you guys! Stop rubbing my back and flicking my toes.

“Sniffle” = Piss off! You jerks tore me from my mother’s perfectly comfortable womb.

Baby Girl B lets out a Moro Reflex of disdain after being startled by the adult-sized stethoscope I place on her chest. Her arms ever so characteristically flail into the air and then fan out to the sides, “What the hell, man?” Her lungs couldn’t sound better.

The nurses and respiratory therapists head back to the NICU, leaving me, my senior, and the babies behind. The resuscitator beeps for the five-minute Apgar.

“What’s it going to be?” My senior resident asks.

“Color is great, but her feet are still blue, so one-off for that. Awesome tone, grimace, respirations, and heart rate. Nine at five minutes!” I announce like Bob Costas.

She concurs, “So who won the Apgar Olympics?”

My mind races. Should Baby Boy A win with consistent nines, or does Baby Girl B’s “come from behind” Apgar of nine at five minutes take the cake? Or perhaps the team wins for our highly orchestrated effort under terse circumstances?

“Definitely Baby Girl B,” I reply, “I’m a sucker for the underdog.”

For me, I’m just happy we finished.

Russell Johnson is an internal medicine-pediatrics physician and can be reached on TikTok @askrussmd.

What we don't teach residents 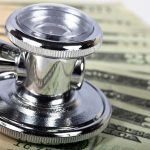 Simone Biles: I am thankful for her strength under pressure 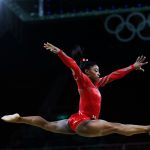