I obtained a master of arts degree in clinical psychology 20 years after receiving my medical degree. One of the first things one learns as a psych student is to “hold the client in unconditional positive regard.” This was a new concept for me as this was, unfortunately, not always true in my experience of Western medicine.

“You may be the only person who has ever demonstrated this to the client.”

Those words hit me very hard. I may be the only person to hold a particular person in unconditional positive regard. And, it may be this very modeling of behavior that helps the client to heal – perhaps affecting multiple generations. I’m certain that this concept informs most of my interactions with patients today. Adding to this the ability to see patients in the comfort of their own environments, much can be achieved in relatively short periods of time.

Today was a clinic day. My first patient presented tearfully. Her cancer is back. This time it is in her brain. She remembers losing her husband to another type of cancer a few years back. She remembers his pain, and she is certain that this is her fate. She is terrified not only of the cancer but of living out what is left of her life in excruciating pain. She asked questions; we discussed options; I assured her that I would be there for her as often as she needs or wants me to be. She was still crying, but she expressed her gratitude. It was at about this point that I asked about her native language. All along, I had been aware of her accent but, through her tears, I could not identify it. I know a few words in a lot of languages (and a lot of words in only one). Over the years, I’ve witnessed a change in people’s demeanor when they realized that I was saying something (occasionally not what I had intended to say) in their native language. My sense is that there is something comforting evoked by an emotion that was felt even before people can speak. And so, when it feels appropriate, I will use my few words of Chinese or Spanish, etc. When I said goodbye to my patient in her language, she seemed comforted and said, “Thank you, Dr. Jill.”

Later in the morning, I saw a patient with debilitating anxiety who experiences tremendous relief with small amounts of nightly cannabis medicine (too much can actually increase anxiety). Once he joined Zoom, I noticed an unusual structure over his left shoulder. After we said our hellos, I asked, “What is that funky-looking thing?” I’ve come to realize that patients will usually not have things they don’t want mentioned in view.

“I’ve decided to grow my own cannabis,” he said.

I asked him to tell me about it. He broke into a smile that wiped away any lingering traces of anxiety. He told me about his grow process, and we eventually transitioned into a discussion about his cannabis use and the relief he was getting for his symptoms. Before ending our appointment, I said something like, “You know, part of a doc’s job is to educate patients about safe practices, right?”

He agreed. This led to a discussion about the nature of cannabis and hemp to pull not only nutrients from soil but toxins, as well. The patient didn’t realize that he could become sick from plants he grew himself. I referred him to some local labs for testing, and he promised to share the results.

Just before lunch, I met with an elderly woman who continues to mourn the loss of her husband and a daughter-in-law. As we began our appointment, she took me on a brief virtual tour of nearby photos and memories, re-establishing our relationship in the process. This patient suffers from insomnia and smokes two puffs of cannabis to help get to sleep. Some nights she falls asleep watching the television and then wakes at three am. She is then up for hours. Although we’ve discussed the dangers of smoking before (she doesn’t like the safer flower vaporizer), this time, I found an in.

“Well, as you’re getting up to go to bed, you could turn on your vaporizer and, by the time you get to your bed, it will be ready for you to take your puff. Maybe you’ll have an easier time getting back to sleep.” I certainly would not recommend this with smoking – both because of the health risks of smoking as well as the risk of lighting something on fire while sleepy; the vaporizer turns itself off. She was intrigued and decided to give the safer option a go.

As physicians, we are privy to some of the most difficult emotional problems and physical issues a human being can endure. As a cannabis specialist physician, there is often the added fact that, although becoming more accepted, cannabis medicine is still a last resort for many. These people, in fact, have tried most of what traditional medicine has offered them. When they come to see us, they are usually desperate and often terrified. Meeting patients where they are, both emotionally and through virtual meetings, is an important part of establishing a therapeutic relationship. From this feeling of safety, the therapeutic alliance becomes something the patient can trust. Once we have our patients’ trust, we can assist them make healthier choices. 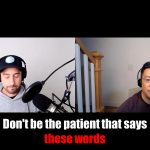