Before you jump on the diet bandwagon with your brother-in-law (who’s crowing about shedding all that weight with so little effort), think about the potential downside.

The problem with an ill-thought-out diet:

Fad diets are designed to take off weight as quickly as possible. They often ignore the long-term effects that might occur regarding both the brain and spine. Someone embarking on a radical weight loss program is liable to make a nutritional blunder that may increase the likelihood he will suffer from brain problems like dementia later in life.

Several low-carb diets call for the elimination of fruits and berries. This ignores the antioxidant and anti-inflammatory properties of these foods that are of great benefit to the brain. Multiple studies have shown that a diet rich in fruits decreases the long-term risk of dementia. Two recent studies prove the point. A 2019 study of older adults found that polyphenol-rich cherries improve cognitive function and memory. In 2017, researchers reported on the benefits of flavonoid-rich blueberries: The berries were reported to improve brain blood flow, brain activation, and working memory.

A good balance of fats is essential to maintain a healthy brain blood flow. Omega fatty acids are the most beneficial. But not all omega fatty acids are the same. Omega 3, the type found in salmon and mackerel, is the best type in this family of fatty acids. Omega 9, found in avocado and olives, is also good to improve brain blood flow. Omega 6 fatty acids, found in soybeans and some nuts, are the least healthful for brain health (although still better than other types of fat or no fat at all).

Many fad diets don’t account for the inflammation in the body that might accrue. Inflammation has been demonstrated to break down the blood-brain barrier (a natural separation between the brain and the rest of the body). This allows toxins into the brain and has been linked to the development of dementia. Anti-inflammatory diets incorporate protein from plants (beans and nuts). It provides nutrients without increasing the inflammation that may be associated with animal-based (meat) proteins. Eating foods rich in good fats, like the omegas discussed above, decreases inflammatory effects on your body. Whether deep green (spinach, broccoli, and kale) or brightly colored (carrots and peppers), many vegetables reduce inflammatory substances in the blood.

Cutting out the chocolate cake and coffee may be good for your waistline, but your brain may pay the price.

Caffeine, found in both chocolate and coffee, has several brain benefits. Neurons (brain cells) have proteins on their surface (adenosine receptors). When neurons are activated by caffeine, scientists have found that test subjects demonstrate improved mood, memory, alertness, reaction time, and mental performance.

Coffee, both caffeinated and decaffeinated, is also rich in phenylindanes. Darker coffee roasts have a greater concentration of phenylindanes. Scientists have reported that this chemical may benefit the brain by preventing the buildup of toxic proteins (tau and beta-amyloid). In this way, coffee may fight against the occurrence of Alzheimer’s and Parkinson’s diseases.

In the same way that fad diets don’t account for brain health, they may ignore spine health.

Rather than concentrating on specific foods, some researchers recommend that you concentrate on your diet’s overall acidity or alkalinity. Proponents of such diets believe that diet can alter the acidity or alkalinity of the body. According to these nutritionists, foods that are themselves acidic, such as lemons or vinegar, do not necessarily render your body acidic. Instead, they characterize meat, poultry, fish, dairy, eggs, grains, and alcohol as acidic foods. Natural fats, starches, and sugars are considered neutral foods. Fruits, nuts, legumes, and vegetables are considered alkaline foods.

In 2001, German researchers investigated the effects of alkalinizing the buffering capacity of blood on the pain symptoms in volunteers. They found that 76 out of 82 patients reported marked improvement in chronic low back pain after four weeks of alkalinizing dietary alterations. Other researchers contend that an alkaline diet is healthy because it is based on whole and unprocessed foods. They cast considerable doubt that any such diet would alter the acidity of your body.

Elimination of some aspects of a balanced diet may eliminate as yet undiscovered micronutrients from the body. Some researchers have suggested that micronutrients, which may be found in natural foods, may be beneficial for spine pain. In 2018, one multinational team reported that consuming natural eggshell membrane alleviated joint pain or stiffness. They reported on 60 women and compared the egg product to a placebo (sugar pill). They reported improved recovery from exercise-induced joint pain and stiffness in the egg-eating group.

Many diets eschew dairy products. But Vitamin D and Calcium are known to increase bone strength and build strong vertebral bones. These can be found in dairy products that are high in calcium and fortified with vitamin D. Leafy green vegetables can also provide calcium. 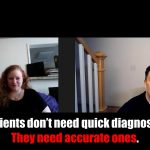