We recently received the news that a patient had died during the night from mysterious clots related to the Oxford-AstraZeneca vaccine (OAZv). This tragic news came shortly after the U.K. revised its vaccination policy to restrict the use of the OAZv in younger adults and many countries paused the rollout of the Johnson & Johnson vaccine, concerned over its link to rare forms of blood clots. ERs in the U.K. are flooded with an endless stream of unusual patients; young, vaccinated health care workers excruciatingly worried over blood clots.

This is the latest in a series of fears of what the virus does in the body and how a vaccine may harm. All of this comes more than a year into a fog of changing health information causing the dilemma of how to adhere to public health directives. It’s no wonder that people are scared. But the question is one of medical ethics both for the public good and for individuals. Both have consequences for fear and trust and when it comes to vaccine programs, both matter.

The OAZv project has been controversial from the start. This month, growing evidence linking the OAZv to thrombotic events, and its suspension of use in many countries has dealt a further blow to public confidence in this vaccine. Yet, even though the most recent events, Britain has managed the incredible achievement of preserving public trust in their national vaccine, with the lowest rates of hesitancy in Europe.

However, people with blood clots raise the question of fear and trust in health care, and the role of information, ethics, and politics in shaping their expression amongst the population. Indeed, vaccine nationalism has been a predominant feature of the British government’s strategy, and a useful proxy in the Brexit war. It started with the U.K.’s emergency approval of the vaccine ahead of the EU. Then followed the open accusations about supply and stockpiling. There was national pride in producing an efficient vaccine, in a clever use of reverse innovation to benefit from trial errors and deviations to advance the science of vaccines, and eventually in developing one of the most efficient vaccination programs worldwide. These, supported by a proactive communication campaign, contributed to shaping public perception and trust in the OAZv.

But as time elapsed and the link between the OAZv and the rare thrombotic syndrome named VITT in younger age groups became clearer, could communication and political agendas have taken precedence over public trust? Indeed, on April 7, the U.K. published its revised recommendations; this decision came three weeks after its neighbors’.

What age is safe to receive OAZv? It depends. In the U.K., it’s 30 and above. Elsewhere it varies from 50 to 65. On the outside, the public opinion has remained unshaken, yet A&E waiting rooms across the country tell a different story. A feeling of self-censorship and political incorrectness appears to have developed around diverging opinions confusingly different directives.

This matter resonated with me when an accomplished medical professional reported attending a COVID debrief: “For the first time in months, the situation on the wards were settling. When the vaccine agenda came up, I mentioned that four young patients were admitted with unusual clots in the weekend just gone. It could be a referral bias, of course. But, in 25 years as a hematologist, I hadn’t seen so many cases in such a short time. Perhaps we should consider reviewing our vaccination policy for younger staff. There was a hushed silence; I thought I would be kicked out.” This hushed silence represents another fear. The fear that asking questions or raising concerns will cause one to fall into a bucket of anti-vax.

Still, why were these health care workers worried?

Could it be the denial? The U.K. acknowledged this problem three weeks later than its neighbors. Could it be the wide variation in recommendations? Or the seriousness of possible threats to the blood supply to the brain or gut, or liver? Or the worry that expressing these fears could cost them their jobs?

The fear of a terrible consequence is not based on confusion, false understanding, or anti-science sentiment. It is the fear of the unknown. It is possible that the current fear of terrible thrombosis will subside with reassurance. But reassurance is a double-edged sword.

Yes, health care providers can remind the public that thrombosis is vanishingly rare, there is some understanding of risk demographics, and people can watch out for warning signs. What they can’t say is that those who develop clots will be ok. CVST and SVT are complex conditions; the terminology and outcome data are befuddling to doctors, let alone the lay public. In the reported cases so far, the mortality has been a horrendous 20 to 25 percent. These could explain the fear.

Governments and policymakers hold an ethical obligation that surpasses the risk-benefit ratio when it comes to addressing “the risk of what and the risk to whom?” It includes taking concerns seriously instead of dismissing them as barriers to public health. It means respecting people’s autonomy caught in a rash of changing data trying to make logical decisions without coercion. Public health is paramount when it comes to vaccines, but it does not negate health care’s responsibility to individual concerns.

Medical doctors so far consider clot-related to be a misfortune. We all want insurances against misfortune. Denmark even ceased the use of this vaccine.

So, while individual doctors have obligations to both the individual and public health, their first concern is their patients. And these decisions have to acknowledge fears and respect the stance. Providers must balance reassurance with acknowledgment, care, data, and the intent to “do no harm.”

It is undeniable that the COVID vaccination has saved countless lives and will be crucial to come out of this crisis. In particular, the OAZv has many advantages for global use. But the success of a vaccination program should not expend of public trust or we may jeopardize the future of global public health.

Mallika Sekhar is a hematologist-oncologist. Lisa Hardy is an anthropologist. Kevin Gillmann is an ophthalmologist. 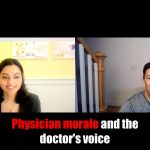 3 lessons I've learned as a doctor during the pandemic