For many of my patients, I am the first Asian and first Chinese person they have personally interacted with. I am placed in a unique situation at this point in time; being an Asian doctor (and the only Asian) working in a rural clinic in the middle of a pandemic that has often been blamed on people who look like me. Not one day goes by without me being acutely aware of the way I look, especially over the last year. Here are just some things that were said to me this past year:

“So, why’d you guys bring corona over here?”

“I have a friend who just adopted a child from Korea.”

“What part of the Orient are you from?”

“You know, I’ve been practicing Buddhism.”

“I ain’t ever seen no Chinese cowgirl before.” (I often wear cowgirl boots.)

Although most of these incidents seem innocent, there is an underlying sense of “othering” implicit in these comments, a feeling all too familiar with my Asian and Asian-American Pacific Islander (AAPI) friends and colleagues. Think of it as constantly feeling and being treated like a foreigner everywhere you go. It can be exhausting. The unprecedented attention on anti-Asian hate in the national spotlight has forced many of us to reflect on our own repressed experiences, reexamine our identities, and begin to actively confront the racial injustices that have gone ignored for far too long. Fueled by the previous administration’s derogative rhetoric, Asians in America are once again scapegoated for a problem they have nothing to do with, in this case, the coronavirus pandemic. Many of you may have also heard about government-sponsored anti-Asian programs such as the Chinese Exclusion Act of 1882 and the Japanese Internment Camps during World War II. But how many of you have heard about the People v. Hall of 1854? The Chinese massacre of 1871? The Rock Springs massacre of 1885? The Asiatic Barred Zone Act of 1917? The brutal murder of Vincent Chin in 1982? The destruction of Korean American businesses during the L.A. riots in 1992? I know I never learned about these in my history classes.

A patient of mine once told me a story about how he came to marry his Filipino wife. He placed an ad in the Los Angeles Times’ personal section stating, “Young white male with a brick home in the country seeking Oriental female for friendship and possibly marriage.”

Apparently, 42 people responded, one of which became his wife (now also my patient). Being an Asian woman, I am often reminded of Western portrayals of us as exotic, hypersexualized, inferior, and submissive creatures. As a female Asian physician, I will sometimes notice this sense of discomfort heightened during particular encounters with white male patients. I tell myself that this uneasy feeling is all in my head, so I have learned to ignore and hide that feeling. Now I wonder if other Asian female doctors have felt the same.

Asians, in general, are not known to speak out, and I am guilty of this as well. We are taught to keep our heads down, stay humble, and go about our business. There needs to be an unlearning process. We cannot stay silent forever. We cannot continue to minimize our problems for the benefit of others.

So, what are some simple things you can do now to support the Asian and AAPI community?

One last thing. Stop referring to us as the model minority. This pits racial groups against one another, marginalizes the needs of AAPI communities, and essentially erases the years of racism and oppression that the AAPI community has faced in this country.

Asian and Asian-American hate is not new. It has just reached a breaking point, and we have had enough. 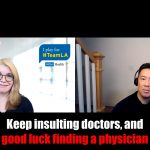 The impact of COVID-19 on health conditions

Asian and Asian-American hate is not new. It has reached a breaking point, and we have had enough.
8 comments