The great COVID vaccine rollout of 2021 is fully underway. Armed with two highly effective products from Pfizer and Moderna, our nation is rapidly advancing toward the immunization of all Americans in hopes of stemming the pandemic. We just can’t get there fast enough.

Indeed, despite nearly 80 million vaccine doses having been administered, and millions more being given every week, tens of millions of Americans are anxious and frustrated by their inability to get a timely appointment because our rollout understandably prioritizes Americans at greatest risk. The others just have to wait. Or do they?

A clear drag on vaccine delivery is the requirement for two doses per person. But is that second shot really necessary? On first glance, the second dose appears to be essential for adequate protection. A deeper dive into the facts shows that it is not.

The obvious reason we are giving two doses is that this is how it was done in the clinical trials. In all fairness, the pharmaceutical companies who planned these trials wanted to be sure their vaccines would unequivocally demonstrate a protective effect. So they stacked the deck. They built in a second dose to guarantee successful trial results. I have no argument with that decision.

But when the results were finally released, we were pleasantly surprised to learn that both vaccines are extraordinarily effective. In fact, both products achieved 95% efficacy, which means the subjects who received the vaccine experienced only 5% as many COVID infections as those who did not. This was certainly an outcome to celebrate.

We have always known that there is a natural delay for a first vaccine dose to take effect and this case was no exception. True to form, during the first ten days after the first Pfizer dose, there was virtually zero impact on COVID infections. But in the second ten-day period, the vaccine recipients had a marked reduction in infections, achieving nearly 100% protection well before the second dose on day 21. Of course, when you average something near 0% together with something close to 100%, you get something in the middle, which was 52%, the widely reported impact for the first dose. But that is mixing apples and oranges. Only when you analyze these two 10-day periods separately do you discover the truth.

The same was true with the Moderna product. In the first 14 days after dose #1, there were 11 infections in the control group and 5 infections in the vaccine group. That was a nice early positive trend. But in the second 14-day period, there was an astounding difference: 35 vs. 2!  In other words, nearly a 95% reduction in infections was evident in the two-week period before the second dose was given on day 28. Unless you believe the second shot could magically protect a subject before it was administered, one must attribute this near-total protection to the first dose.

Which brings me to the public health question. Should we be rolling out these vaccines as a pair of doses several weeks apart, as we are doing, or should we wait to give the second dose until everyone at risk has received their first? To say it more explicitly: If I have just two doses of the vaccine and two susceptible subjects, should I give one dose to each subject on the first round, or should I give both doses to one subject? Which strategy is more likely to save a life? Based on the evidence I have presented, the answer is clear. Treat both subjects with a single dose.

The movement of evidence-based medicine has encouraged physicians to make patient-care decisions based only on hard facts. Truth in numbers. Nowadays, we encourage physicians to go straight to the source, the actual publication of study results, so as not to receive a “processed” version of the truth. In this paradigm, there is no opportunity for misdirection. The efficacy of the first COVID vaccine dose is only apparent when one directly accesses the study results. You can do this yourself, as the New England Journal of Medicine articles on the Pfizer (see figure 3, inset) and Moderna (see figure 3, lower graph and table) vaccines are accessible to the public.

Contrary to the American approach, the United Kingdom made a controversial decision to roll out the first dose before proceeding with the second, and I believe the U.S. should follow suit. I see no reason why national leaders cannot adopt the same evidence-based principles that drive the practice of medicine. With close attention to the numbers, we can accomplish the same great results in national policy that the world of medicine has achieved in patient outcomes. 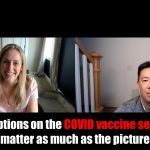