Over 100,000 medical and surgical resident physicians and fellows (combined, “house staff”) are the first-line physicians for most patients in the nation’s 1,100+ teaching hospitals. Maximum weekly work hours regulated by the Accreditation Council for Graduate Medical Education (ACGME) are colloquially cited to be 80 per week. Notably, however, they are 80 hours averaged over 4 weeks (88 with “sound educational rationale”), without maximum weekly hour limits, and with maximum individual shift lengths of 28 hours. There were no hour regulations for physicians until 1989 when New York State and the Committee for Internal Medicine implemented the 80+ hour week after the death of 18-year-old Libby Zion in 1984.

In response to ACGME Task Force report, 80+ hour week/24+ hour shift maximum standards were then universally and nationally enforced by the ACGME in 2003, having since proven resistant to further sustained change. Especially in their first year of training as interns, house staff increasingly work these hours in a context of cognitively, socially, and emotionally stressful environment with steep learning curves, major, sudden shifts in responsibility, widely varying supervision, and insufficient break and rest time. Beyond the stressors inherent to patient care, they face increasing work compression, burdensome electronic health systems, administrative demands and costs, and an inadequately supported aging population with increasingly prevalent chronic diseases. They acclimate to a litigious system that prioritizes health care as a business rather than as a basic human right, an inherited professional culture that perpetuates discrimination, abuse, and harassment, a public that increasingly distrusts the system and profession, and a professional and societal expectation of martyrdom beyond reasonable occupational duty.

In this narrative review grounded in advocacy journalism, a gestalt discovery grounded in the available peer-reviewed evidence, history, ethics, and professional culture explores the impact of current work hour restrictions and OSHA misclassification on house staff health, as well as the workplace, patient, and public safety to which it is inextricably tied.

According to the World Health Organization (WHO), health is defined as “a state of complete physical, mental and social well-being and not merely the absence of disease or infirmity.” And as outlined in HealthyPeople2030, an ongoing initiative of the Office of Disease Prevention and Health Promotion (ODPHP), “social determinants of health are conditions in the environments in which people are born, live, learn, work, play, worship, and age that affect a wide range of health, functioning, and quality-of-life outcomes and risks.” In 1970, stirred by its mission to “make sure that every worker in the nation goes home unharmed at the end of the workday, the most important right of all,” the U.S. Department of Labor’s Occupational Safety and Health Administration (OSHA) passed the OSH Act. The OSH Act supported workers with the right to safe and healthful working conditions, bolstering the basis by which occupation can be addressed as both a major contributor to health and a human right. Despite multiple attempts at reform, that the OSH Act doesn’t exclude workers receiving an educational benefit, and that the National Labor Relations Board has noted that house staff are primarily employees, house staff remain classified as students under OSHA which precludes their workplace protection by a more highly independent, public, federal supervisory board than the ACGME.

Residency and fellowship training, exacerbated by long work hours (i.e., more than 40 to 60 per week), has been demonstrated to contribute to various forms of occupational injury and resulting impairments in biopsychosocial-spiritual health, including depression, anxiety, suicidal ideation, attempt, and completion, cumulative sleep deprivation, accidents, pregnancy complications, health-related quality-of-life, and more.

The evidence is even demonstrated on the microscopic level, with a 2019 study published in Biological Psychiatry finding that interns’ telomeric DNA, whose shortening directly reflects aging, shortened 6 times faster than age-matched controls, with longer hours associated with more significant effect. Numerous studies have consistently shown the dangers of 24+-hour shifts, demonstrating that there are “remarkably few” objective data to support their necessity or safety for patients or physicians at any level of training. And the public doesn’t want the risk either, with a 2016 poll finding 80 to 86 percent of the population, across bipartisan lines, opposed allowing house staff to work more than 16 hours per shift regardless of training level. Well-meaning solutions offered cannot systematically and universally solve the root causes, often unintentionally placing the blame of burden on the worker rather than the system. Additionally, even with annual surveys, there is no reasonable source of independent ethical review for training programs or the ACGME itself. Therefore, meaningful, systematic change must be made directly at the levels of both the ACGME and OSHA.

Despite the medical community’s justified support for ethical, evidence-based practice, work hour restrictions set by the ACGME lack such a basis. While a 2010 systematic review on shift lengths published in the Annals of Internal Medicine found that most studies support reducing hours, they do not provide any serious proposals for a proposed change. This narrative asserts that work hour maximums and OSHA misclassification are the leading drivers of preventable biopsychosocial-spiritual occupational injury for house staff that are also most amenable to systematic, actionable, specific, efficient, feasible, meaningful change. Due to the magnitude of varied evidence to suggest their impact on house staff occupational health and patient safety, meaningfully addressing work hour maximums and OSHA misclassification are ethical imperatives or highly ethically necessary choices. It recommends 65 maximum weekly work hours with 16-hour maximum shift lengths across specialties, including strict enforcement and whistleblower protections, and OSHA reclassification to include house staff under its protection as employees.

With physician burnout/moral injury/rights violation costing the U.S. health care system $4.6 billion per year and medical error being up to the third-leading cause of death in the U.S., with physician burnout and safety limitations being an independently associated cause, improving the evidence base, innovation, and humanity with which we address excessive house staff training hours and lack of occupational protection under OSHA is one that affects us all. Indeed, it is no less than a matter of occupational and public health.

Nisha Mehta, MD on why physicians should consider side gigs [PODCAST] 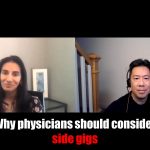 Yes, your doctor was a sorority girl