The day after Christmas, my husband Paul developed a fever, chills, and cough.  On Sunday, he tested positive. He probably got sick helping a family member, but we’ll never be certain how the virus invaded our home, rendering us hostage for weeks.

Since I wasn’t sick, I tried working from home. In between patients, I’d peek in on Paul, trying not to disturb him, piled under blankets. He groaned when changing positions.  When I asked how he felt, he’d reply in barely audible grunts I interpreted as “leave me alone.”  So, that first week, I did.  He mostly slept.

Doctors like to fix things. I convinced myself there was nothing to do – it would run its course. It would be unwise to sit bedside and risk infection from sudden, forceful coughs as I watched his fitful sleep. I didn’t like to see him so vulnerable.  He didn’t really need me.

I’d soon find out I was wrong.

One day, after finishing telemedicine, I removed my noise-cancellation headphones and heard spastic, unremitting coughing.  I ran to find Paul, pale and exhausted, eyes full of fear. When I suggested we consider the ER, he balked. He was afraid he’d end up on a ventilator – a thought that never crossed my mind.

I realized then that Paul needed my medical knowledge.  Because he was healthy, he simply couldn’t make sense of his severe, unremitting symptoms and presumed the worst. I reassured him he didn’t need that level of respiratory support.  I explained his condition, something I should’ve done from the beginning (which I’d naturally have if he were actually my patient).

Paul took ibuprofen and acetaminophen around the clock.  Despite this, fevers spiked above 104.  His body aches were so severe they scared him.  My sister, a hospital nurse, told me that her COVID patients lay very still, unmoving.  Any shift in position made the pain unbearable.  He also couldn’t keep up with his fluids – everything passed right through him.  He threw up what little he ate.

I wore a mask around the house and a medical respirator when I was in direct contact with him.  When his cough worsened, I wanted to listen to his lungs. I couldn’t hear anything with the noisy respirator, so I made him go outside in the snow so I could remove it. He couldn’t inhale without coughing and wincing in pain.  I put my stethoscope to his bare back and heard crackling. I called the on-call doctor, something I hadn’t done in 20 years. He started Paul on antibiotics.

More than medical expertise, Paul needed my loving presence.  I failed him the first week, but I’d change that.  Since I was home, I’d deceived myself about my availability.  I decided to stop working and became his devoted caretaker.  He tearfully thanked me. I’d left him alone to recover, but he just felt alone.

Paul’s symptoms fluctuated wildly.  On day 11, he still had high fevers and diarrhea. He left bed only to stumble to the bathroom. I took him to the ER and waved as they whisked him away, suppressing the fear they might keep him.

I sat in the car updating family members. After an hour, Paul texted to suggest I go home for a while.  Knowing our bedroom-turned-sick-ward was in much need of cleaning, I agreed.

I slipped on the respirator and gloves and tore the sheets off the bed.  I opened the windows and ran the vacuum.  I’d barely finished washing the sheets when Paul texted me he’d be discharged in 20 minutes. I dropped everything (the hospital was 25 minutes away).

When I was still 10 minutes out, Paul texted he was heading toward the exit.  I drove as fast as I dared, not wanting Paul to wait outside in below-freezing weather.  As I neared the hospital, I had to shift lanes to avoid a man shuffling alongside the desolate road.  It was Paul.

I did a U-turn.  He got in, coughing and wheezing.  I thought: “What were you thinking?  You just left the ER with pneumonia!”  One look at his face, though, turned my outrage to concern.  There were three people in the waiting room. He didn’t want to risk exposing them.  When I pointed out he was nearly a mile from the hospital, he admitted his judgment might be impaired.

The supportive “treatment” of COVID is exhausting, chasing symptoms before they rage out of control, waiting helplessly for interventions to work.  Two weeks into his illness, Paul still needed fever-reducing medicine every four hours.  Attempts to decrease dosing caused high fevers.  He took a pill for nausea and one for stomach protection.  He took guaifenesin and an antibiotic twice a day and prednisone for bronchospasm.  At dinner, he took an aspirin and two routine medications.  I made a spreadsheet for this complicated regimen – almost 40 pills daily. I don’t know how people who aren’t medically trained manage.

Paul gradually improved.  On day 19, we took a slow, short walk.  His oxygen dropped to 80 percent.  Just before heading back inside, I tucked into his arms for a few seconds.  We hadn’t hugged in twenty days, not that I was counting.

Finally, the next day, Paul was released from quarantine.  I hugged him for real.

I know I’m lucky.  I never worried I’d be fired and we’d lose health insurance. I never felt alone, thanks to the support of friends and family.  I’m forever grateful to the oxygen delivery driver who braved our rural dirt road late one bitter Friday night, likely preventing hospitalization. And, I tested negative three times – boosting my confidence in mask-wearing, hand-washing, and social-distancing.

The next time a loved one needs caregiving, I won’t be pushed away.  I’ll overcome feelings of inadequacy and show up anyway.  I’ll remember that when I finally became the caregiver Paul needed, we both felt better. 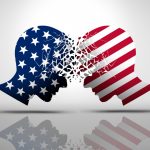 Prison medicine during the pandemic [PODCAST] 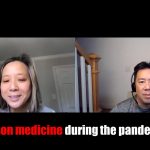