Recently, I started suspecting that RT-PCR testing was not foolproof at ruling out COVID disease after seeing a fair number of patients with typical signs and symptoms but a negative PCR. I have encountered some patients hospitalized with typical COVID pattern pneumonia, thromboembolism with multiple negative PCR tests. Some of these folks even had exposure history and the signature hallmarks unique to this virus, like multiple peripheral opacities on CT scan and loss of sense of taste and smell.

This raised the question about the test’s validity. Contrary to common belief, tests of all kinds have some degree of false positives and false negatives. With influenza almost nonexistent in the U.S. this season because of all the COVID precautions, it is hard to ascribe another cause to justify these patients’ typical symptoms and presentations. Multiple companies are doing these tests, and some without much experience under the FDA’s emergency use authorization. Most folks believe that a positive test means they are sick and negative means that they got a green signal to be free, but the truth is far from it, and the answer is somewhat complicated.

It was only recently that I uncovered the extent of this issue after some research. According to a Johns Hopkins study, this so-called gold standard RT-PCR test can have a false negative up to 20 to 66 percent of the time in even symptomatic patients depending upon the test’s timing. False negatives can be up to 100 percent on day one of exposure (asymptomatic) and down to 20 percent on day 8 of exposure (day 3 of symptoms) and then starts going up again. Statistics tell us that the false-negative rate goes up even higher as the prevalence of disease goes up, as is the case with COVID right now. A meta-analysis from Europe actually found an average false negative of 54 percent. These numbers are actually from monitored and regulated studies where things are done more meticulously than real-world scenarios. Performing many of these tests quickly in the clinical setting because of soaring demand, with each test resulting in sampling error, pressure on labs to provide quick turnaround, and rationing of scarce reagents in labs increase this percentage even higher. Some mutations could be potentially affecting the accuracy as well.

With false-negative tests, people get a false sense of security, bring their guard down, and stop isolating. The resulting higher prevalence in the community leads to an even higher false-negative rate. This leads to even more COVID patients with false-negative tests getting roomed with other non-COVID patients. Unprecedented pressures on hospitals, physicians, nurses, case managers, and hospital administrators contribute to this. Medicare rules are black and white, and it does not consider a patient having COVID even with typical symptoms if the test is negative.

We need to look at pretest and posttest probability of each positive and negative test based on each patient’s symptoms, exposure history if any, sensitivity and specificity of each test, and prevalence of the disease in a community at that time. This may seem very complicated at first, but if we can understand the basic variables that may affect a test result, we can get a rough estimate of the post-test probability of a positive or negative test without any complicated calculations. Postmarketing surveillance and research show that most RT-PCR tests have a high specificity of 90 to 95 percent, but their sensitivity is low at 60 to 70 percent. False-positives are not that much an issue (unlike antigen testing) and mostly because of lab contamination, but false negatives are. The best time to do the test is between 1 to 7 days from the start of symptoms, with day 3 being the best.

On the other hand, a case can be made that all patients with almost typical symptoms be assumed to be positive and should isolate without any testing. Testing can be limited to patients with atypical symptoms or high-risk patients who could benefit from monoclonal antibodies if diagnosed earlier within 10 days. The population can also be educated about the limitation of this testing, especially false-negatives, and also focus on the red flag symptoms of confusion, shortness of breath, persistent chest pain, cyanosis, etc. which are critical and should prompt them or their loved ones into calling 911/going to ER for possible hospitalization. This will also relieve a tremendous burden on testing sites and the need by family members to drive these patients around town and, in the process, exposing themselves and other health care workers. This will also free up some critical health care workers and valuable resources, including testing kits and reagents for higher risk and hospitalized patients.

I wish the FDA, CDC, epidemiologists, experts, and media put more time and effort into public education on this serious pitfall of testing. Even most doctors don’t understand or know the extent of this serious limitation for RT-PCR testing, which could play a significant role in spreading this disease.

Long-term sequelae of a life in medicine 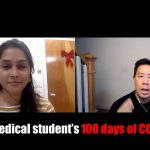