It seemed like an innocuous tweet. It was just a doctor, somewhere on Twitter, declaring that it was important to learn to quickly ascertain if patients were “sick or not sick.” It was sentence; perhaps two. It spoke volumes.

He was not suggesting that doctors needed to learn to quickly assess severity; to triage for treatment priority; to know when to send a patient to a specialist. Nope. It was “sick or not sick.”

Is it really that simple?

I’m a patient. I’m fully aware that doctors’ time with their patients is quite limited in this age of overbooked schedules and profit-driven insurance companies. However, I’m also an example of why quickly deciding a patient is “not sick” can be harmful. Not every symptom has an immediately apparent reason.

I have a form of primary immunodeficiency and several cardiac issues. It’s presumed that I was born with both, but they were not diagnosed until I was in my 30s. I was symptomatic from childhood, but red flags were missed repeatedly by doctors who insisted I was “not sick.”

I remember having infections every few weeks. I remember telling my doctors that I was dizzy and having chest pain. One doctor said I was too young for heart problems. Another asked if I had friends and was lonely. Everything was blamed on the one diagnosis I did have – asthma – even though there was nothing clinically to suggest that. I was tested for drugs. Every now and then, someone would check for lupus or other autoimmune diseases; when those tests came back negative, they shrugged. My vitals and blood counts looked good, after all. It was probably all in my head.

Many of the doctors I saw were in a rush. They spoke quickly without even looking me in the eye. Some tried to prescribe drugs I was allergic to, even though my allergies were clearly noted in my chart. Others didn’t catch discrepancies on the very labs they’d ordered. They didn’t know what was wrong, but they weren’t going to slow down long enough to find out or send me to someone else who might know. They just insisted I wasn’t sick.

My new primary doctor saved my life by noticing what those speedy clinicians had missed. Among other things, she noted that I had a rapid heart rate at every single visit. I was referred to cardiology and immunology and sent for a sleep study. She had to talk me into following up because by that point, I no longer trusted that specialists would listen to me.

And she was right. Numerous lab tests, imaging studies, and cardiac monitoring confirmed that my health issues were very real. It took more than a year to perform all the testing needed, due in part to the maze of HMO authorizations we needed for the simplest of things.

By the time doctors did get to the root of things, my health had deteriorated to the point where I could no longer work or engage in most of the activities I enjoyed. Decades without appropriate treatment and monitoring will do that to a person. My current medical team is wonderful, but they are constantly doing damage control that might not have been necessary had their colleagues had slowed down and diagnosed me earlier.

The conditions I have are not controversial. They’re not trendy. They’re not particularly rare. They don’t have nebulous diagnostic criteria. They can be diagnosed objectively with widely available, minimally invasive procedures, and blood tests. In my case, the tests were not even ordered for years. Most of the time, I did not look sick, and most of the time, my basic vital signs and blood counts didn’t immediately suggest I was sick. It was still true.

I’m not alone. According to NORD, many patients with the primary immunodeficiency CVID are not diagnosed until they are adults, despite having symptoms since childhood. I’ve personally met women who were sent home from the emergency room when they had heart attacks. Numerous studies have shown that Black women are more likely to have their symptoms and pain dismissed than white women. There’s clearly a disconnect, and it’s one that can cause irrevocable harm. Yet, when patients advocate for themselves and insist that something is wrong, they’re often met with undisguised hostility and resentment from the medical establishment.

The patient knocking on your door is not your enemy. They’re sick. They’re scared. They’re in pain. They don’t know why, and they’re hoping for an answer. If you can’t find the source of a problem quickly, it doesn’t mean it’s not there.

COVID-19 vaccines: Channeling the 7 habits to get from vaccines to vaccinations [PODCAST] 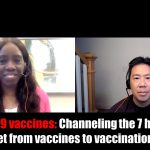 #ThisIsOurShot to end the pandemic