He studied at Turin, worked as a chemist until the age of 24, and in 1943 he resisted Nazi occupation of Italy with a group of countrymen. Italian fascists arrested him, turned him over to the Germans, and sent him to Auschwitz in 1944. He arrived on a train packed with six hundred and fifty people. He was imprisoned in the concentration camp for a year. Later he would write, “of six hundred and fifty, three of us were returning.” He survived the concentration camp in part because he was a chemist and so he was sent to work in a rubber factory—inside and away from the relentless winter.

Primo Levi became renowned as a Holocaust survivor and as a writer. “If I hadn’t had the experience of Auschwitz, I probably would not have written anything.” He left Auschwitz needing to bear witness. “The memories were burning inside me,” but he recorded them with a scientist’s exactitude. His writing about Auschwitz was celebrated because he refused to aggrandize the horrors. He understood that the facts were enough.

In 1987, Primo Levi died by suicide at the age of 67. He had confided in a friend days earlier that he was in “severe depression.” Fellow Holocaust survivor and Nobel laureate Elie Wiesel eulogized him: “Primo Levi died at Auschwitz forty years later.”

As a descendent of Holocaust survivors, a medical student, and a writer, there are many reasons why I admire Levi. There is a small but meaningful lesson that I value among his many accomplishments: he unified his scientific work and writing. I used to think that I would have to choose between medicine and literature. Levi proved otherwise. He showed how systematic thinking elevated his prose while imagination animated his scientific contributions.

In both his memoirs and his scientific papers, he humanized as much as he could to make his observations accessible for his readers. He once called sodium a degenerate metal; he mocked chlorides as “riffraff in general.” He brought his subjects to life in ways that were unimaginable to me. He even humanized his captors in Auschwitz so that his readers would have to confront the fact that such wretched figures could be neighbors or parents.

In medical school, I began experimenting with a new writing style, inspired by Levi, where I would humanize an inanimate object. I once got stuck while I was researching ways to implement artificial intelligence into the workflow of medical students and physicians. I could imagine how the new technology might work, but not how it would make people feel. I turned to Levi for guidance. I brought an artificial intelligence program to life: first I gave it a voice, and then an attitude. My new device either snickered in dismay or nodded approvingly—its only way to impart information—whenever a doctor considered a diagnosis or ordered a new test. One of the consequences of this pseudo-A.I. device was that despite its exceptional accuracy, physicians began to jeopardize patient care in defiance of its condescending nature. This writing exercise allowed me to consider different perspectives of the science.

Levi’s imagination brought life to his scientific work. As I pursued an interest in dementia care, I watched many physicians administer assessments, prescribe medications, and counsel families without deviating from standard procedures. One doctor stood out by recommending a creative care program that uses improvisational storytelling activities to bring meaningful care into the lives of patients with dementia. The activity encourages people to enjoy each other’s company because stigma, social isolation, and a lack of purpose contribute to worse health outcomes and lower quality of life. This creative approach to dementia care reminded me of Levi by invigorating the human elements that dementia obscures.

I began leading my own creative care sessions with my classmates at a nearby assisted-living facility. We brought in silly pictures to a group of twelve patients, asked questions, and made up stories about the images. The results sounded like personalized Mad-Libs comics. While the stories were entertaining, the most meaningful moments came when patients would linger afterwards to talk about houseplants or baking bread. Both students and patients had their personalities on full display. If Levi were trying to change dementia care, I think I saw how he would display our shared humanity.

What connects a playful writing activity, creative dementia care, and the monumental works of Primo Levi is a commitment to cultivating the humanity in science. Levi saw personality in chemicals and scientific principles in people. He dismantled barriers between science, creativity, and writing. He created a roadmap to integrate multiple disciplines and showed his readers new perspectives. Levi’s legacy is undoubtedly his survival of Auschwitz and how he lived and died afterwards, but I will always appreciate how he united science and writing.

David B. Ney is a medical student and can be reached on Twitter @davidbney.

COVID vaccine distribution is a fiasco 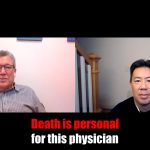