The health care circumstances of President Biden’s ascent to the Oval Office are unprecedented. He is inheriting responsibility for the American response to a pandemic that has taken more than 400,000 American lives and will take office just months after the Supreme Court heard a case challenging the constitutionality of the Affordable Care Act, which if repealed will threaten the insurance status of tens of millions of Americans.

With health care at the center of his presidency at its outset, President Biden hopes to further make history by passing the ever-elusive “public health insurance option.” To appreciate President Biden’s likelihood being successful in this effort, one must revisit the historical circumstances surrounding President Lyndon Baines Johnson’s (LBJ) passage of the nation’s largest public health insurance programs: Medicare and Medicaid.

LBJ and Joe Biden’s respective efforts to pass health reform are rather alike. LBJ and Joe Biden each enjoyed long and influential careers in the U.S. Senate, served as vice president to young, charismatic predecessors, entered office amidst national crises, and will have occupied the Oval Office championing a progressive health care agenda inspired by their predecessor.

For instance, LBJ passed Medicare and Medicaid partly in honor of the late President John F. Kennedy, who unsuccessfully attempted as President to pass a federal health insurance program for seniors. Similarly, Joe Biden’s efforts to pass a public option will follow President Obama’s own unsuccessful attempt at including a public option in the final version of the Affordable Care Act.

These similarities raise the question of whether 2021 will be the year a public health insurance option comes to fruition, or if the comparative political circumstances of our time vs. 1965 will lead him to be unsuccessful in the attempt to mirror LBJ’s success.

In contrast, President Biden will lead a more divided government. Although the Speaker’s gavel will rest in the same hands that passed the Affordable Care Act, President Biden will face a more contentious Senate than did LBJ. The incoming Senate’s current partisan breakdown is 50 Republicans to 50 Democrats, leaving the President’s party without a filibuster-proof majority.

However, looking to history, LBJ’s legacy shows that changing minds and votes is possible. In the final vote tally passing Medicare and Medicaid, 13 out of 32 Republican Senators voted in favor, as did half of all Republicans in the House of Representatives. A few years earlier, President Kennedy’s health insurance program for the elderly failed after being labeled as “socialized medicine” by then actor and future Republican President Ronald Reagan.

Looking to today, with the backdrop of several Republican Party breaking ranks and voting to impeach former President Donald Trump, President Biden may have a window to collaborate across the aisle in good faith on a public option.

Time is of the essence

When President Johnson was first elected to the Presidency, he gathered his staff and shared, “Every day while I’m in office, I’m gonna lose votes…. We need…[Medicare] fast.” History has proven LBJ correct, as Medicare and Medicaid were passed just seven months after LBJ was elected President. Now it is not just history that demands urgency, but COVID-19 does as well.

COVID-19 disproportionately impacts those with pre-existing conditions, and our health care system leaves one in five Americans with a pre-existing condition uninsured. Further, with multiple COVID-19 vaccines already in early but slow distribution, attaining universal coverage is critical, particularly in light of uninsurance having an inverse relationship with vaccination rates.

President Biden will need to act with a legislative urgency that matches these times to pass a public option. With two-thirds of the country approving President Biden’s handling of the transition, now is his opportunity. He may just need to take a few pages out of the “Johnson treatment” playbook in crafting the “Biden treatment.”

Jonathan Staloff is a family medicine resident and can be reached on Twitter @jonstaloff.

Lessons learned from a combat doctor in Iraq [PODCAST] 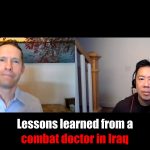 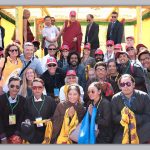