For you, the story is quite different. Away from the anxieties of the news, you were there, in the front row. You saw it all. You heard about it in January, and somehow it was impossible to fathom the horror that was to come.

You agonized about the misses; vitals flashed in your dreams. You wondered what more you could have done. The missed pulmonary embolism, the respiratory distress syndrome too advanced to be remedied. The lack of guidance on anything. When or not to use antibiotics, or whether they were even effective if this was supposed to be a virus. Why was there so much confusion about whether to use steroids? Did the ventilator do more harm than good?

You saw life wither away in successive seconds, some on the gurney in the corridors of a crowded emergency room, with oxygen tanks emptying at dizzying speed. You were pulled from your familiar grounds to unfamiliar grounds. The mother and baby and the eyes and skin were your safe space, and now suddenly, you had to wear a different hat. Yet despite it all, you suited up and did the work.

You saw the hospitals come to their knees. We all came to our knees. Our only means of survival was to play dead to our emotions to muster the strength to keep fighting. Most would expect that as the vaccines emerge from the horizon, that this would all go away. But you know you are yet to truly process your horrors. The tougher days are often when everything was expected to be great when everyone is supposed to be jolly and happy. You knew somehow your case will most likely not be so.

The horror sadly is still here, highly likely the worst most of us have yet to see. How did we get here? We always say once beaten twice shy, but this looks like thrice beaten no shy. How did we let the third wave become even deadlier?

We tried to speak up and speak out, loud and angry, in all ways, we could speak. But even that did little to cool the rage of this lifeless beast. You warned; you advised; you understood that there would be pain. That our livelihoods and others were going to dwindle. You were furloughed just like most because no one wanted to show up to the urgent care, the ER, to get their eyes, ear, nose, and teeth checked. You knew it was the necessary sacrifice, and you endured. While some claimed you were out to get rich by faking death certificates. That you were in on the “hoax.” Hoax? When these many people died in front of you? You wanted to cry but had none left after all the many you cried with families that put all their hopes in you even when you knew there was little to do to save their loved ones.

You were mad, angry, enraged. You knew we could have done better, yet we did not. The people that were supposed to protect us made this all about themselves. It was about who was right and who was wrong rather than what was true. History will certainly judge us for our inability to come together for the good of ourselves.

Despite the horror, some of our brothers and sisters in society chose to disagree on this monster’s validity. You shook your head when you saw the conspiracy theories. At first, they said the hospital car parks were empty. Therefore the hospital had to be empty. Not knowing half of your team and fallen ill, you alone had to do 4 people’s work, even as you felt your immune defenses waiver as the virus permeated your nares because today was the 5th day in a row you had used your N95 mask. They claimed it was all 5G, and at that point, you realized foolishness sadly needed no response. But you know you had to respond, and when you did, you were attacked viciously, you received threats, and you just did not know if there was still hope for humanity.

And now that the vaccine is here, we are at least able to hang on to some hope even as the death toll rises sharply: 3,000+ in a day, Good lord. Despite that, you knew you could not give up hope because that is all you have. Hope is all you hang on to. And as the holidays emerge, you know your recovery is still ahead. The flashes, the nightmares, the vitals beeping in your restless sleep, the dead patients everywhere. When everyone expects you to move on, you know it will take more than just congratulations and adorations for a job well done. You know it will require first that you will have to be gentle on yourself despite all the pain, and you will remember, you are not alone.

Fatai Oluyadi is a hospitalist and can be reached on Twitter @FataiMd.

If you don't see the light, become the light yourself 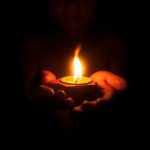 Getting a second opinion can save lives. It is time we make Miranda rights for patients.