Though pushed to the back-burner by the never-ending orange election drama, the Supreme Court, with its significant conservative majority earned against the run of play, (to borrow a metaphor from sport) is one decision away from potential political irrelevance. Is there a way forward for the Supreme Court? Conservative hypocrisy and liberal outrage at the recent Republican machinations to pack the court with conservative jurists out of step with the country’s norms and values as a whole has the left looking for solutions when the reins of power pass into their hands. Should the Senate Democrats prevail in Georgia, the clamor to fix the conservative Senate’s perceived double-dealings will be uncomfortably vociferous.

As it is now composed, the decisions of the Court should they vote to reverse decades of precedential jurisprudence and rile those who voted in a left-leaning administration, leading to questions of legitimacy of the highest court in the land. Imagine the outcry should a woman’s right to control her own reproductive self-determination be overturned by a 5-4 decision led by Trump’s three appointees. Yet, solutions aimed at increasing the number of jurists, should the Democrats control all three legislative checkpoints, fall somewhere on the spectrum from unpalatable to unconscionable.

And yet, bedrock cases are at risk of being overturned, out of step with the plurality of Americans’ morality and sense of social justice, cases essential to health care, reproductive rights, gay marriage, and racial injustice. For many on the left, this conservative judiciary seems patriarchal, bordering on illegitimate, where the court proselytizes how we ought to live or behave.

But simply expanding the court is a dangerous precedent for any party that is unlikely to retain power in perpetuity. The Supreme Court held fast at the odd number nine for over one-hundred and fifty years, has been like a spinning wheel for our democracy, inertially stable and gyroscopically resistant to change from pushes from either the left or the right.  When FDR’s Democratic Party controlled the Senate and House, the Democratic senators were reluctant to monkey with the sacrosanct number on the high court, even after the conservative court had ruled against the immensely popular FDR and some of his left-leaning initiatives. The backlash against the conservative court swayed the jurists to rethink some of their conservative decisions, allowing popular New Deal legislation to pass muster when others previously had been ruled unconstitutional.  The threat of court-packing by FDR and with it, the possible dilution of the power of the individual Supreme Court judge led to a change in tactics for the hard-headed conservative bloc that was opposing the New Deal initiatives and the will of the nation trying to extricate itself from the miasma of the Great Depression.

Should President Biden find himself confronted with a similar judiciary, willing to overturn Roe vs. Wade, affirmative action, or the ACA, he might find the metaphoric footprints of FDR tempting to retrace. One option, not available to Roosevelt, would be to admit Puerto Rico and Washington, DC as states. Here are four million tax-paying Americans without representation, more than Wyoming, North Dakota, South Dakota, and Montana combined. This would keep the Senate from falling into minority hands and confirm judges representing the country in thought and pattern. Over time, the crisis would abate. For most on the impatient left, this would not go far enough and could ultimately jeopardize crucial laws held as sacrosanct in the near term.

For a president unwilling to upset the judiciary’s inertial wheels by out and out packing of the court to find a new liberal majority, a more subtle tack might be effective and fair. Instead of having a court with only nine members, the supreme judiciary could be composed of a faculty or a bullpen of jurists, say twelve in number, nine of which would be “on-call” for each case that comes down the docket. Ideally, it would have an equal number of left and right-leaning judges, but this could obviously not be guaranteed. With six liberal judges and six conservative judges, a team of nine could be allocated randomly in the juridical bullpen that would fairly assign, from a bench of qualified judges, a jury to decide each case. Without a conservative anchor like Thomas or Alito or a liberal adjudicator like Kagan or Sotomeyer deciding every case, a more centrist doctrine might emerge. While the idea of random assignment of jurists to an important case might not appeal to everyone, it would add a layer of expectation or excitement, the way a lottery drawing might invite enthusiasm for those invested in winning.

Supreme Court jurists are confirmed for life and can have a significant impact on American legislation. Term limits for the Supreme Court jurists have been proposed to quash the establishment of an oligarchical powerbase in an unelected, lifetime-appointed judiciary. When the court is evenly divided, this often gives outsized leverage to the swing jurist for decisions with a huge impact on American lives. Having a faculty of jurists might restore some sensibility to this manifestation of oversized power wielded by a handful of jurists, or even a single judge, that the founders could not have foreseen.

If a bank of judges, as was the case during the New Deal, holds more power than the legislative and executive branches, it rankles the electorate and erodes the court’s legitimacy. Having an extended group of judges with a similar number of right and left-leaning appointees to form a team of nine to decide a case breaks up this bank and ensures that no one president can inordinately tip the scales in his party’s favor. This also almost guarantees that no one jurist plays an oversized role in deciding the fate of our democracy.

With this system, there would no longer be a vacancy on the court. If a judge retires or dies or recuses on a case, the faculty would be able to send in another jurist right away. Likely each side would want to fill the court with as many like-minded judges as possible, but because there would be no guarantee that any chosen judge would adjudicate every decision, the confirmation process might be less venomous.

Various details could be hashed out, like whether the Chief Justice would be seated for every case, or whether each judge would hear and participate in every case but only nine randomly chosen to write opinions. The added number of jurists would soften charges of court-packing from the right. The Republicans over the last four years willfully ignored Uncle Ben’s admonishment to Peter Parker, that with great power comes great responsibility. They abdicated any responsibility to the American people by allowing Trump and Senator McConnell to run roughshod over the judicial nomination procedure norms. This requires correction but in a fair way and avoids the cyclic retribution that has become commonplace in today’s body politic. President Biden should add three members to the Supreme Court faculty, starting with Merrick Garland, to right the wrongs of the Right’s willful negligence and overt hypocrisy of the last few years. Thenceforth, the random allocation of jurists to opine on each case ensures that no one president can leave an oversized boot print on the decisions of the court and would secure the legitimacy of the court for years to come.

Why corruption is ruining your health care [PODCAST] 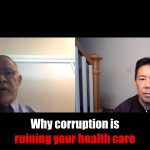 A call schedule to fix the Supreme Court
12 comments