The Prussian pathologist, Rudolf Virchow, who gave us Virchow’s triad: hypercoagulability, endothelial injury, blood flow stasis also gave us the foundations of social medicine, claiming that “physicians are the natural attorneys of the poor” and should be equipped to solve the pressing social problems of their time. In addition, he argued that politics was indeed “medicine on a grand scale,” assertions that are all the more prescient during a global pandemic. As cases of COVID-19 continue to rise across the U.S., many medical school students are asking themselves why our nation has failed to address this crisis and why this disease has disproportionately affected communities of color. Indeed, a recent CDC MMWR reported that laboratory-confirmed COVID-19 among AI/AN persons was 3.5 times that of non-Hispanic white persons. Many medical school students feel a responsibility to help our communities affected so acutely by these social disparities. And yet, we are also asking why this occurred and what exactly is the nature of the medical system we have inherited and in which we are training.

During a recent discussion led by medical student leaders at my school, the question arose of physicians’ role and responsibility to be advocates for their patients. While many of us in attendance felt that physicians were obvious advocates for patients, some also expressed doubt that physicians are eager to take on this historic role. This observation of physician-advocates and those physicians who would deny a role in advocacy in their medical practice, emerges from our clinical experiences and our personal lives, and begs why this is the case. I argue that embedded in our social responsibility in medicine is its own solution: increasing socioeconomic diversity within medical school matriculants will provide our nation with more “poor” physicians equipped with the unique skills needed to help their communities.

Socioeconomic diversity and ethnic diversity continue to be a problem for recruitment and retention at most medical schools. A 2018 AAMC analysis on economic diversity shows only 5 percent of medical school matriculants come from the lowest economic quintile while nearly 60 percent come from the uppermost quintile. While we can and should advocate for populations of which we are not an immediate member, history has shown us that the most effective means of advocacy comes from within a population. According to the U.S. Census, while one-third of the U.S. population lives at or near the poverty line, less than 7 percent of incoming medical students identify as such. Furthermore, studies of unconscious racial and class bias have shown that medical students and physicians appear to have a class-based bias against the disadvantaged. Therefore, it follows that if low-income and BIPOC populations are not adequately represented in medical school admissions, their particular concerns and the needs of their communities are not going to be represented or prioritized in the training of medical students, in the professional lives of physicians and the health care workforce, and in our critical health care infrastructure design and implementation nationally.

Many researchers and advocates have long argued for one solution to identify admissions policies that recruit and train more students from low-income and BIPOC backgrounds. Opening the doors to medical training for low-income and BIPOC is one way to gain the specific knowledge and experience necessary for these communities’ lasting interventions. The numbers above point to how our policies have not thus far succeeded in diversifying the health care workforce. Rather, to do so will take political will and changing hearts and minds of those who occupy gatekeeping positions about the root causes of disease and what makes us especially vulnerable to disease. From inside this pandemic, expanding access to medical school admission for low-income and BIPOC is an immediate concern for our communities’ immediate health and a way to move forward. However, it is also an action that demands that we look back and learn from our profession’s history as one rooted in advocacy.

Kasey Johnson is a medical student. 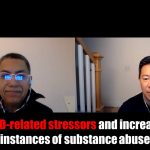 We are human and all in this together

Reimagining medical education from within a pandemic
1 comments